A few weeks ago, some information crossed my desk asserting that an inordinate number of people in the Minnesota county where I live participate in the SNAP (food stamp) program. The number was so startlingly high that I decided to track down its validity. In the course of doing so, I learned the need for all county-provided human services is growing.

While I never did get a number that I would be comfortable publishing about how many people in the county are assisted by SNAP, I did learn that about 20 percent of our population receives medical assistance (this does not include people purchasing private insurance through the Affordable Care Act) and that domestic abuse reports have sharply spiked in the past five years, involving 20 percent or more of our children. In the course of multiple conversations with folks who work in human services and health care, I learned that hard times are a reality for many in my community, especially young families. One person with knowledge of the situation describe it as “a crisis.”

So why should you care? We’ll get to that. But think about this: the county where I live is often held up as an example of a rural economy that has successfully pivoted from its former extractive industries base (in this case, logging and commercial fishing) to a new economic base of tourism and the arts. We’re frequently at the top of national and regional “best of” lists for tourist destinations. As a result, we have essentially zero unemployment. Foreign workers from across the globe travel here to fill seasonal jobs. The construction, sale and resale of second and retirement homes is a significant part of the local economy. We bustle with visitors during the warm months and no longer “roll up the sidewalks” during the off season.

But there seems to be a growing divide between our outwardly visible economy and the realities of making a living here. Many working-class people hold two or three jobs in order to make ends meet. For many, owning a home is nearly an unachievable goal, because average home prices are nearly double of what they are in other northeastern Minnesota communities. Rental properties are expensive and hard to find, with the better ones being converted to vacation rentals for the tourist market. The cost of staples, from groceries to gasoline, are significantly higher here than elsewhere. The local hospital no longer delivers babies, forcing expectant mothers to travel over 100 miles to Duluth. Young people often move to the county with hopes of putting down roots, only to leave in frustration a year or two later, stymied by the lack of economic opportunities that would allow them to do so.

So, again, what does this have to do with you? More to the point, what does it have to do with the outdoors? Well, if a standard-bearer of a transformed rural economy remains a place where the working class struggles to get by, perhaps this will provide you with a little insight of rural America’s realities. As an example, I recently heard the Minnesota DNR commissioner remark in a presentation that the little western Minnesota town where he worked during the late 1980s had lost 40 percent of its population since then. As in much of rural America, there simply isn’t enough economic opportunity to convince folks to stick around…or to move there.

Some say that this is just the American way. We’ve always moved to places where we had a chance to better ourselves. This “grass is greener elsewhere” idea is what has motivated people to immigrate to America and fueled our westward expansion across the frontier. Moving to the city has always been an option for farm boys and farm girls seeking a better way of life. That’s as it should be.

The difference now is that it is increasingly difficult for anyone short of those who inherited land or a business to make a go of it in rural America. Rural communities struggle to attract doctors, lawyers and school teachers. Aspiring young farmers or loggers are greatly challenged to make a start. Existing rural businesses have trouble keeping their doors open due to sweeping changes in manufacturing and retail. You might say rural America is faced with a perfect storm of economic adversity.

I am starting to wonder about how rural economic issues affect our ability to deliver conservation to our lands and waters. Let’s face it, conservation can be a tough sell in communities faced with economic uncertainty. Pundits and environmentalists typically spin this as a “jobs vs. environment” scenario; a description that does little more than underscore their ignorance on both topics. To dismiss people’s real fears about their economic security does nothing to convince them to support conservation efforts. In fact, doing so makes it easier for the forces opposed to conservation to drive a wedge between rural communities and efforts to protect lands and waters.

While it isn’t incumbent on conservationists to solve the economic problems facing rural America, they should at least acknowledge those problems exist. Rarely does this occur. But I’m not so sure we can have a healthy landscape in the absence of a healthy rural economy.

It is unlikely humanity will return to a hunter-gather existence, so we have to come to terms with the fact that people who are living on the land, rural Americans, are using and extracting natural resources for the benefit of our common good. In other words, we need them out there. The challenge is to encourage, even demand, responsible resource use and extraction while striving to make the public and private conservation investments necessary to make it happen. Some conservation organizations operate this way. Unfortunately, some groups and individuals still spout the tired old environmentalist rhetoric of the 1970s that turns every issue into a crisis and demonizes anyone who may think differently about it. We must do better than that. Going forward, conservation will only be successful if it is regarded as a positive force, not only for our lands and waters, but also for the people who depend upon them for their existence. 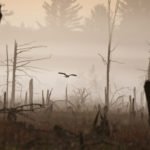 Autumn in the Marsh

We need Congress to show leadership on wildfire issues