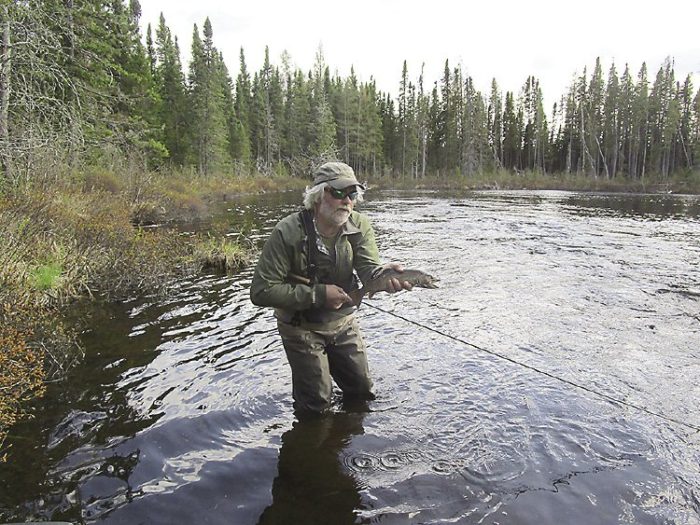 After a three-hour drive to Grand Marais from his home in Superior, Wisc., my friend Damian Wilmot was eager to hit the water. He stopped by my office, where I was putting the finishing touches on Friday afternoon.

“I’ll meet you on the river,” he said. And away he went. A couple of hours later, I pulled in beside his vehicle, donned my waders and hit the water. Fishing quickly, I started downstream, unsure how far Damian would be ahead of me, given his two-hour head start. Coming around the second bend, I spotted him walking upstream toward me. Soon I learned he had caught and released a pair of 14-inch brook trout. Along the North Shore, stream brook trout that size are prized catches—and exactly what we were seeking.

It had been a long time since Damian had fished for brook trout in the maze trout streams twisting through the hills north of Grand Marais. As the owner of Fly-By-Night Guide Service, he has spent more than 30 trout seasons along Wisconsin’s historic Bois Brule River where he guides anglers in a restored 1911 Lucius canoe. While a lifetime of guiding hasn’t dampened his enthusiasm for fly fishing, he simply hasn’t had time to get away. That changed this year when he “retired” from guiding.

In March, I ran into him at the Great Waters Fly Expo in the Twin Cities and mentioned that hardly anyone fishes for brook trout these days.

“I’m finding the same thing in northwestern Wisconsin,” he said.

We traded tales about the brookies we’d caught the previous summer and how fisherman trails that once led to the cold waters where they dwell are now overgrown. As avowed brook trout anglers, we immediately made plans to go fishing. Damian wanted to return to some of his old haunts.

We finished off the evening at another spot, where Damian caught a third 14-incher. I managed to land a plump 8-incher before inexplicitly breaking my fly rod, likely from previous, undetected damage. In my experience, no fishing rod lasts forever. We quit fishing before sunset.

In the morning, we spent a couple of hours seeking a lingering steelhead in a river near my home, since the late spring prolonged the run. Damian used a two-handed spey rod to swing flies through a long riffle. He’s an excellent caster, so it was fun to watch him employ a method that I know little about. Instead of making a backcast, spey anglers use an elegant roll cast to send their fly surprisingly long distances with minimal effort. They can fish along a brushy bank without worry about tangling their line in the trees behind them. He used the same technique with an ordinary fly rod to efficiently fish streamers for brook trout.

We headed inland, where brook trout dwell in nearly all tributary creeks. Damian had a particular place in mind and, even though it was Saturday, we were surprised to find someone there ahead of us. It was the son of one of his fishing friends who was camping there with his girlfriend. Since this wasn’t a place with a lot of elbow room, we moved on, seeking unpeopled waters. Actually, the couple had done us a favor, because they reported they hadn’t caught anything, saving us a couple of hours of fruitless casting.

We went a-roving and found a place where we could slide a canoe into the deadwaters of a small stream. Before we did, Damian made a few casts with a muddler minnow into the deep water where the current flowed into the pond. He was rewarded with a hard strike and set the hook into a very stubborn trout. Slowly, he played it to hand. The brookie was truly a handful.

When we pushed off in the canoe it was my turn. Damian paddled from the stern while I cast from the bow, using his four-weight rod with the muddler minnow. The water was as clear as a window pane. I worked the muddler amidst boulders and logs where brookies likely lurked. Old white pines and jack pines towered above an adjacent ridge. Labrador tea grew along the boggy waters edge, where black spruce found footing. The setting was as lovely as the brook trout that came to the fly. None were anywhere near the size of Damian’s trophy, but they were brookies just the same.

Eventually we reached the end of the deadwater, where the current quickened and the creek narrowed as it slipped beneath a canopy of ancient cedars. We pulled up the canoe along the bank and got out to wade. Now it was Damian’s turn to fish.

He waded into the creek and began working the muddler downstream. There was no room to cast in the cedar tunnel, so he threw mends into his line to swing the fly from one side of the creek to the other, probing every pocket that might harbor a hungry brookie. Soon he found one; a 10-incher with a belly the color of a summer sunset. Its beauty matched the idyllic setting beneath the sheltering cedars.

“This is Tolkien woods,” Damian said.

Although the creek beckoned us to continue our downstream exploration, we decided it was time to turn around. When we reached the deep water where the creek entered the deadwaters, Damian held the canoe so I could make a few casts. A big trout grabbed the muddler, but I broke the tippet on the hook set. Away the trout went with Damian’s muddler. Retying with a fly of my own, I subsequently missed three more strikes. For a guy who frequently fishes alone, it was the sort of performance you only make when you have an audience.

It didn’t matter. Damian was my guest and he caught some memorable brook trout. Best of all, we’d had fun fishing together. We’re making plans to do it again. 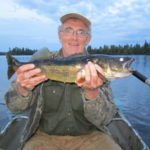 Walleyes, other fish not native to inland waters 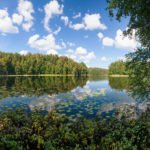