The ecology of the Boundary Waters has changed since the blowdown of 1999 and the subsequent fires.

On the final night of my first canoe trip to the Boundary Waters Canoe Area, the sunset on Alpine Lake was phenomenal. My friend Barbie and I paddled back and forth across the bay, our paddles dipping into liquid fire, as my dad took dozens of photos. Elegant pines brushed their tips against the sky, and the sun sank behind a uniformly forested hill. “Closer, farther, slower,” he directed us, as together we composed the perfect picture.

One year later, the Boundary Waters Blowdown of July 4, 1999, devastated more than 370,000 acres of the one-million-acre wilderness area. To my dismay, Alpine Lake received some of the worst damage. That was 20 years ago this month.

Because of my focus on the Boundary Waters, at the time I didn’t realize the full extent of the storm. It began as a thunderstorm in North Dakota, and blew through Minnesota, Ontario, Quebec, New Hampshire, Vermont, and Maine before finally dissipating two days after it began. Straight line winds in excess of 90 miles per hour (also called derecho) uprooted and snapped off trees, not to mention wreaking havoc on the human communities in its way. Outside of my beloved wilderness, the storm caused over $100 million in damage, killed four people, and injured 70 people. More than 700,000 homes and businesses lost power.

There were plenty of injuries in the Boundary Waters, but no deaths—at least no human deaths. Many acres of forest, and an estimated 25 million trees were “destroyed.” With trunks snapped off, or jumbled in piles like Pick-Up Sticks, foresters knew that fire danger would be high.

The Forest Service brought in experts to assess the fuel load, and took measures to make sure that if fires began inside the wilderness, they wouldn’t expand beyond the wilderness and put human property in danger. Outside the wilderness, timber sales and salvage logging took place. Inside the wilderness, local officials received special authorization from the Washington, D.C., office to use strategically placed prescribed fires to reduce fuel loads. Local property owners got strategic, too, and increased their focus on “defensible space” and other precautions against the inevitability of wildfires.

Six years after the Boundary Waters Blowdown, I was fully addicted to the BWCAW and working for the Forest Service on their portage crew. I cleaned campsites in the blowdown area on Alpine Lake, but could not recognize our sunset bay. Late that summer, lightning started a fire in the blowdown area between Alpine and Seagull Lakes. I watched from my canoe as helicopters dipped water from Seagull Lake, and I thought back to that final night on Alpine Lake in 1998. First the blowdown, now the fire: my heart sank knowing that the wilderness would change even more.

Like many of us who love the Boundary Waters, I couldn’t help but feel sadness that the lake had lost some of its primeval feel; that the photos my dad took record a landscape that had become almost unrecognizable. But since that first trip, I’d also studied fire ecology in this fire-dependent landscape. I knew that fire and wind are a natural, even necessary, part of the shifting mosaic in this near-boreal forest. Disturbance and succession in forests create an ever-changing patchwork across a landscape.

New trees have grown up so thickly in blowdown areas, that according to Steve Piragis of Piragis Outfitters in Ely, “It’s now hard to see the mess that was so obvious in the first few years.” From my two summers on portage crew post-blowdown, I know firsthand that young shrubs and trees shot up like rockets wherever the demise of the canopy gave them extra access to sunlight. Portage trails in the blowdown required much more tedious work with nippers than a trail through a mature stand of pines.

For a more scientific report on the recovery of blowdown areas, though, I called up Lee Frelich. As director of the University of Minnesota Center for Forest Ecology, Frelich and his graduate students have been systematically studying forest regeneration in the Boundary Waters for the last 20 years.

“Disturbances are like a filter that not all species can pass through successfully,” Frelich told me. “This one was so severe that only a few trees made it through.” The effects weren’t uniform, though. The current diversity of the forest mosaic depends on a suite of factors.

Red pines, jack pines, and white pines were the biggest losers across the board. Their tall, thin trunks with top-heavy canopies are not built to withstand strong winds. This far north, hurricane-force winds were not part of the historical disturbance regime that they adapted to. After the pines went down, the saplings of shade-tolerant conifers that had been biding their time in the understory made the most of their opportunity for growth. Black spruce, balsam fir, and white cedar—whichever were present under that particular stand of pines—grew quickly into the canopy. These late-successional conifers are the natural heirs of pine forests in the absence of ground fires, which would clear out the understory and allow pines to continue growing and regenerating.

When fires began to sweep through blowdown areas, they brought more changes within the mosaic. Jack pines are well-known as fire-dependent trees up here. But these fires, with plenty of fuel on the ground, burned too hot. Jack pine cones in the canopy receive a flash of fire that scorches the corky cone scales and releases seeds into a now-sunny opening. Jack pine cones that have been blown to the ground are incinerated in the 10-20 minutes it takes for a fire to pass.

The fir, spruce, and cedar that had begun to take over blowdown forests are not adapted to fire of any kind. When those trees burn, quaking aspen and paper birch take advantage of exposed mineral soil and bright sunshine to become the next generation. After a spring fire, aspen become dominant by sprouting from the root systems of any scattered trees that had been present in the forest.

When a fire occurs in mid-summer or fall, birches take over. In addition to sprouting new growth from burned stumps, their tiny seeds can blow in to reseed an area from miles away. In a few locations where red and white pines survived on the edge of burned areas, the mature trees have been able to restock the forest with new pines.

So in blowdown areas, the forest has shifted to either shade-tolerant conifers or aspen and birch, depending on if and when the forest burned. These are patterns I’ll be looking for on my next paddling trip. Another shift is happening, too. Red maple is a significant part of the forest understory in all of these scenarios. Just 50 years ago, it couldn’t have survived the bitter cold of winter. Both northern pin oak and northern red oak are also increasing in abundance, especially on the Boundary Waters’ west side.

Maples and oaks that were in the understory of unburned blowdown areas are now racing toward the canopy. In burned areas, they are migrating in. The small, winged seeds of red maple can fly great distances, and the small acorns of these oaks fly up to two miles—in the mouths of blue jays. Under the translucent leaves of aspen and birch, their seedlings receive just enough light to survive, and slowly reach for their turn in the canopy as the birch and aspen die off.

The strong wood and flexible leaves of maples and oaks make them better suited to surviving windstorms, too. According to Frelich, “If the Boundary Waters had the frequency of downbursts that we have in southern Minnesota, the whole forest would have been leveled a long time ago.” Having grown up in northeast Iowa, I was flabbergasted. I’d never realized we had so much wind. Of course we have tornadoes, but out in the rolling farmland, what makes the news is the destruction of human infrastructure, not trees. “The same wind that could go through an oak forest in Iowa with little damage would level trees in the Boundary Waters,” Frelich explained.

Big windstorms, also termed downbursts or derechos, have been rare at the latitude of the Boundary Waters. That’s changing. As the climate warms and gases expand, our atmosphere is actually getting taller. One consequence is that thunderstorms will be more frequent farther north, and they can get taller, too. Taller thunderstorms are more likely to produce downbursts that blow down trees.

In a future where both higher precipitation and higher temperatures are predicted for northern Minnesota, it may be significant that, according to the NOAA, the two months leading up to the blowdown were hotter than normal, with near-record rainfall.

Once you start looking at the impacts of climate change on our beloved Boundary Waters and the surrounding forests, it becomes clear that its consequences are pervasive, and closely tied to the Boundary Waters Blowdown of 1999. More blowdowns mean more fires, and fewer and fewer pines. Red maple and oak will continue to increase.

Warmer summers will eventually cause so much evaporation that—despite a concurrent increase in precipitation—most trees won’t make it, and we’ll be left with an oak savannah in place of a boreal forest. That’s the forecast for 2070 in our current high-emission scenario.

Right now, moose and snowshoe hares are benefiting from the prolific new growth of tender young shoots. Lynx are enjoying the snowshoe hares, and also the temporary increase in snowfall that was predicted for the early stages of climate change. Pine martens and fishers should do fine once the new forests begin to mature. Canoeists, too, came back quickly to the wilderness. Because there are fewer big trees, I now use a bear-resistant canister instead of a bear hang to protect my food, but that’s an easy change.

Change is inevitable. The Boundary Waters we loved, both before and after the blowdown, itself is a result of hundreds of years of disturbance, regrowth, and succession. I’m not excited about the current changes, in large part because of humans’ role in the demise of the landscape we admire. But the vibrant green hues of young forests are pleasant, and some of my favorite places in Iowa are savannas. They are beautiful. In an interview with Minnesota Public Radio, Frelich took the stance that, “If the climate is going to go that direction and we’re not going to do anything about it, we might as well make it the best savannah that it can be.”

While researching an event that happened 20 years in the past, Frelich has ended up looking decades into the future.

Twenty-one years ago, Barbie and I paddled back and forth across the sunset while helping my dad compose the perfect picture on Alpine Lake. Then, as now, it’s quite clear that both the perfect picture and a perfect wilderness are moving targets, with the potential for beauty remaining constant, even if almost nothing else stays the same. 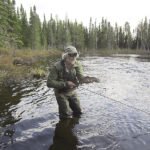 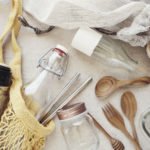