The dead of winter is a time for scheming and dreaming. In the midst of snow and subzero temperatures, I hatched a plan. Wouldn’t it be great, come April, to load up the dogs and a fishing rod, then head out to the Dakotas to see what I might find? This wouldn’t be a fishing trip per se, just a chance to enjoy spring on the prairie.

Then spring arrived. I caught a steelhead. And promptly decided that I won’t stray far from the North Shore anytime soon. At this time of year, there’s no place I’d rather be.

Awhile back, a friend suggested that I ought to travel more. After all, I don’t have any commitments, own a business and like to go places. Nothing really holds me back from getting out to see the world. It was hard to disagree with my friend’s logic. But it didn’t spark the urge to hop on a plane bound for some distant destination.

To be sure, I’ve made western road trips in recent years, not to mention multi-day quests to flush pheasants or cast for trout. But the only place I’ve used my passport is to cross into Canada en route to Thunder Bay or points beyond. And for now, I’m ok with that.

Although I like to travel, it is hard to get away. I’m a busy guy, but that’s not real the reason. It’s more because my life is linked to the rhythm of the seasons. I enjoy spending what time I have savoring the world around me. Right now, I’m happy to spend my time along a trout stream, wandering in the woods with my dogs or taking care of all the spring yard work that must be completed before planting time.

In the past, I’ve sneaked away in the spring to hunt turkeys, which is fun. But it’s tough to do that and then take time a couple of weeks later to go trout fishing. Besides, time in the turkey woods comes at the expense of time along my favorite rivers close to home. The last time I went turkey hunting was during a spring drought on the North Shore when the rivers were too low for enjoyable fishing. I didn’t miss anything when I went away.

As spring morphs into summer, gardening takes center stage. Preparing and planting a garden is a lot of work; the most you’ll do until harvest time. I really enjoy eating what my garden grows, so all of the work is worth the effort. Heck, in May and June, gardening even cuts into my precious fishing time. Travelling then is out of the question.

Last year I went away for a couple of weeks during July. I returned home to a weed-infested garden and discovered I’d missed out on the summer’s best trolling action on Lake Superior. It was a worthy trade-off, but I never got on top of the weeds over the rest of the growing season. Before leaving, I’d managed to get in several evenings of productive fly-fishing, so July wasn’t a total wash.

Once the garden begins producing, I enjoy the fruits of my labor. In fact, between fresh produce, wild mushrooms and fish, I have little need for groceries. Keeping up with ripening vegetable crops is an ongoing task, so it is hard to get away. Besides, as a million tourists know, the height of summer is a great time to be on the North Shore. Why go somewhere else?

Sometimes, I hit the road after Labor Day. If you don’t have kids, this is a good time to travel. The weather is great and all of the best places are less crowded. But I like to be back home in time for bird season. That’s why I have Labrador retrievers. In fact, I have little interest in heading west or north for autumn big game hunting, because I’d rather follow a bird dog.

Once, while working on a book, I spent a week in October on the California coast. The weather was terrific and I had a great time sea kayaking, walking through the redwoods and making that awesome drive to Big Sur. I’d love to do it again, but it is nearly impossible to give up a precious week of October for anything other than pheasant hunting. And November? It’s deer season. Need I say more?

About the only time for me to get away is during the dead of winter, although I have no desire to lie on a beach somewhere. My sun-sensitive skin and aversion to heat and humidity even dampens my desire for fishing in snowbird land. However, this is the best time to visit the far-off trout waters of Argentina, which is high on my list of places I’d like to see someday. Maybe one winter I’ll find someone to watch the dogs and hop on a plane. I won’t miss ice fishing.

Until then, my travel will likely be a day or two’s drive from home. I fully intend to spend a few nights in the next month camped beside a wild trout stream. Come June, there’s some Ontario backcountry I’d like to explore. Heck, I may check out some Minnesota backcountry, too. That way, I can still see some new scenery and be around home enough to mow the grass and take care of the garden.

When fall arrives, maybe I’ll sneak away and fulfill a dream of spending two or three weeks roaming the near West to hunt pheasants and grouse. I have a young dog with a lot of energy, so now would be the time to do it. Actually, I’d rather do that than spend a similar amount of time touring Europe, Alaska or some other far-off destination. Maybe I don’t dream big enough. Oh well. Maybe I’ve found that a life filled with lots of little adventures leads to satisfaction. 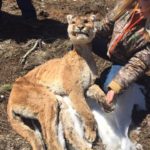 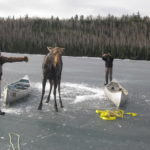 Moose Rescued from Hungry Jack Lake after Breaking Through the Ice