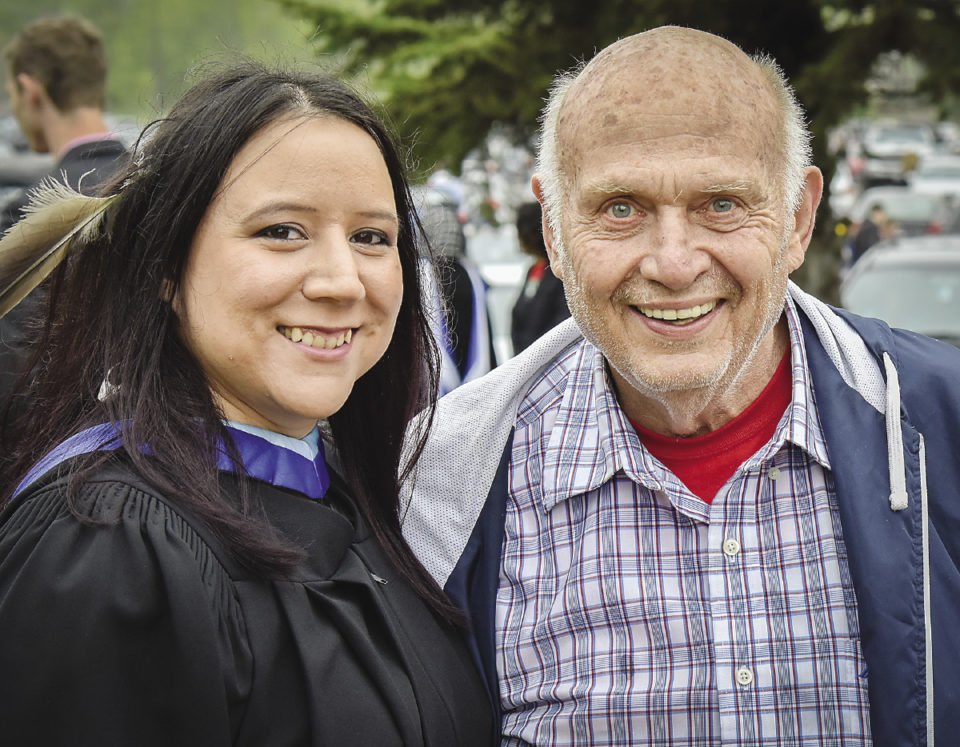 Dr. Paul Morgan, shown here at his friend Angela Benedict’s college graduation, devoted his life to helping others, asking nothing in return. | SUBMITTED

Sometimes people enter your life by happenstance and become your friend. Doc Morgan was one of those people. Professionally, Dr. Paul R. Morgan was a successful oral surgeon in Toronto, Ontario. But I came to know him because he owned a fly-in fishing camp east of Sault Ste. Marie.

Doc wasn’t much of a fisherman. We never spent time on the water together. He had purchased Blue Fox Camp to create a youth camp, where disadvantaged kids could learn outdoor skills like rock climbing and paddling. Fishing customers in the spring and fall would help pay the bills. If that sounds like an impetuous plan, well, that’s the way Doc rolled.

Blue Fox is located on a system of lakes containing lake, brook and rainbow trout. My friend Greg Schrantz of Minneapolis, who did taxidermy and print framing for Doc, told me how 3- and 4-pound rainbows spawned in a creek that ran through camp. The surrounding forest was dotted with small lakes stocked with brook trout that grew to large sizes. Since Doc wanted to promote fly-fishing, Schrantz introduced us. That September, Schrantz and I met Doc at Blue Fox Camp. It was the beginning of a long friendship.

Doc was one of a kind. Even in camp, he usually wore surgical scrubs. No one knew when he slept. After full days of surgery, he dashed around Toronto in the evening to buy supplies for camp. On Fridays, he made the six-hour drive north, napping in his van at the float plane base so he could fly in at daybreak. Arriving at camp, he was a whirlwind: checking in with the college kids who were his staff, inspecting various remodeling and construction projects, greeting and visiting with the guests, and immersing himself in all things Blue Fox.

Doc transformed Blue Fox from a relic of an earlier era into a comfortable, rustic resort. He built a shower building to make the camp more welcoming to women. This was coupled with renovating the cabins and decorating them with Canadian Indigenous art. Meals were prepared and served at the main lodge by a college-aged chef. Some of his young staff were certified instructors in rock climbing and paddling.

He approached fly-fishing and improving the area’s trout fishery with zeal. Over the course of a decade, I watched him work with provincial fisheries staff to address overfishing for lake trout with a reduced bag limit and stocked the surrounding lakes with brook trout at his own expense. He even instituted a fall fisheries survey to assess brook trout populations. A five-pound brook trout on my office wall that was the fruit of his efforts.

There was much more to Doc than Blue Fox. He once flew Vikki and I to Toronto to help promote Blue Fox at a fly-fishing show, as well as my book, Fly-Fishing the North Country. While we were there, he treated us to dinner and a theater performance. We also visited a home he owned on the outskirts of Toronto primarily to house a portion of his art collection. It was so filled with art that one bedroom was stuffed with floor-to-ceiling stacks of framed prints. Doc didn’t live in there. At the time, two young fellows from Newfoundland were staying in the home because, as Doc explained, they needed a place to live.

Helping others was really what Doc was all about. In doing so, he touched an extraordinary number of lives in many ways. For instance, he would mention travelling to the Yukon and the Cayman Islands to perform oral surgery. His door was always open to Indigenous artists, student athletes and even kids at risk who needed a place to stay while in Toronto. He was a patron of many artists and a helping hand and mentor to many kids. What surprised me most was how many folks he knew on the North Shore.

Angela Benedict of Thunder Bay met Doc when she was 12 years old and growing up on a reserve on northern Lake Huron. She was playing outside one day when her mother asked if she’d like to attend a summer camp. Thirty minutes later, she was on her way to Blue Fox. There she experienced kayaking, canoeing and rock-climbing, developing an enduring passion for the outdoors. She went to Blue Fox as a camper for four years and then worked there for two summers during high school. She went on to win rock-climbing competitions and compete in kayaking marathons. Doc became a positive force in her life.

“Doc was always supportive,” she said, “but he would leave it up to you to take the initiative and do it.”

They stayed in touch. When she was a broke college student, occasionally a plane ticket would arrive in the mail, allowing her to attend a distant roller derby tournament. Later, she would meet him for dinner when on work trips to Toronto. The next day, the front desk of the hotel where she was staying would call to say she had a package: paints provided by Doc to support her budding career as an artist. More recently, when she was taken to Toronto for open heart surgery, Doc came to the waiting room to sit with her fiancé through the ordeal.

“He never asked for anything in return,” she said.

Minnesota North Shore artist Neil Sherman got to know Doc while attending Lourdes High School in Rochester, Minn. Doc worked in Rochester early in his career and had a long association with the school, as an athletic coach and as a donor. He sponsored Sherman to attend a couple of sports camps while in high school. Later, as a greenhorn to Northwoods living, Sherman spent a winter working at Blue Fox.

“It prepared me for the life I live now,” Sherman said. “And he was always supportive of my art.”

Another Cook County resident who met Doc while attending Lourdes High School was Tim Ramey, owner of Naniboujou Lodge. The Catholic school had a limited sports program at the time, with football being the only fall offering. When the school started a cross-country running team, Ramey wondered if he should switch from football to running. He decided to ask one of his football coaches, Doc.

“I always saw him as someone who was approachable,” Ramey said. “He commanded my respect.”

Doc’s advice? Take up running. Ramey did. He went on to win Catholic School state meets. Doc also sponsored him to participate in the Boston Marathon for two consecutive years. Running became an enduring aspect of his life.

Decades later, Ramey was inducted into the Lourdes High School Hall of Fame. Unbeknownst to him, Doc planned to fly from Toronto to Rochester for the event. Inclement weather prevented him from doing so. Ramey, nevertheless, was moved by Doc’s gesture.

“He was so generous and giving,” Ramey said. “He invested his life in me.”

In a way, Doc saved Ramey’s life. I was present for Ramey’s darkest hour, when he was struck by a collapsing chimney as our volunteer fire department battled a house fire. Buried beneath hot rubble, he wasn’t breathing as we began to rescue him. As our crew pulled the rubble from his unconscious torso, Ramey miraculously started to breathe. His body instinctively kicked into the strong, steady breathing rhythm of a runner, almost certainly saving his life. I remain humbled by what we experienced the night.

When I told that story to Doc, he was more concerned with how Ramey was recovering. He asked about him, as well as other mutual acquaintances every time we spoke. He had an extraordinary memory for people he’d met previously, even if it was years ago. Last September, we had lunch when Doc and his friend Mary Dierling passed through Grand Marais. It was great to see him. Doc invited me to visit Blue Fox this summer. I was really looking forward to that trip, but it won’t come to be.

Sometime over Easter weekend, Doc’s life was taken by someone residing in his home who he was trying to help. Call it senseless. Call it tragic irony. Call it whatever you want. For those of us who knew this incredible, selfless human being, all we can call it is grief. 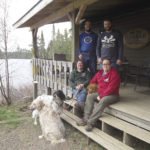 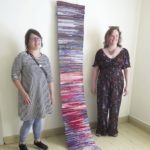