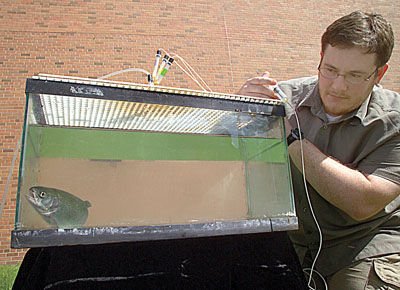 Ben Thwaits tests the response of a rainbow trout to bile acids. —Photo by Dave Hanson

If a Lake Superior Kamloops rainbow trout could talk, it still might not care to reveal what Minnesota Sea Grant-funded graduate student Ben Thwaits has painstakingly discovered: the smell of certain compounds found in fish excrement help adults of this strain of migratory trout find their way home.

Thwaits’ findings build on work conducted half a century ago by Arthur Hasler, a pioneer in freshwater ecology who demonstrated that an ability to detect and remember smells enabled salmon to journey thousands of miles to spawn in the stream of their birth. The identity of this home stream odor has remained a mystery…until now.

Thwaits, along with Peter Sorensen, professor with the University of Minnesota Department of Fisheries, Wildlife, and Conservation Biology, and Allen Mensinger, associate professor with the University of Minnesota Duluth Department of Biology, found compelling evidence that the odor trail leading home is laced with bile acids, a distinctive class of steroids produced in the liver to aid digestion.

There are different types of bile acids and they appear to be commonly released by stream fishes. Earlier work conducted in Sorensen’s lab demonstrated that bile acids also function as attractants for migrating sea lamprey, a species that invaded the Great Lakes. Thwaits and Sorensen’s research has revealed that Kamloops release a mixture of three bile acids: taurocholic acid, taurochenodeoxycholic acid, and cyprinol sulfate.

Adult Kamloops detect these digestive compounds with acute sensitivity and specificity. In fact, trout are so sensitive to the odor of these bile acids that they can detect them at concentrations of less than a thimble-full in a billion gallons of water.

Thwaits and his colleagues also conducted classical conditioning experiments demonstrating that adult trout can remember the odor of bile acids for many months. Unique sets of these digestive chemicals released in the feces and urine of stream-resident juvenile trout seem to be part of a natural home stream odor for returning adults.

Fisheries biologists and managers are realizing that a clearer understanding of the way some fish species detect and respond to specific odors may lead to new management strategies. For instance, bile acids might eventually be used to lure trout and salmon back to locations where they are now threatened. Bile acids could also be used to increase the rates at which stocked salmonids return to select spawning streams. For sea lamprey, careful application of bile acids will likely soon become a means for reducing population size.

The bile acids released by Kamloops are also released by other species, although in far smaller quantities. Because they are not unique to rainbow trout, they are not pheromones, which by definition are species-specific compounds that elicit instinctive behavioral responses. Even though trout bile acids do not function as ‘classic’ pheromones, they do fulfill criteria to be considered an important part of learned home stream odor, said Thwaits. 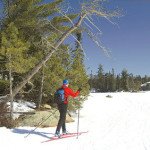 Ethanol May Cause Boat Fuel Problems