The Minnesota DNR is planning a proposed Border to Border Touring Route, which will allow high-clearance, 4WD, highway-licensed vehicles to traverse existing roads from Lake Superior to the North Dakota border. The route would be about 400 miles in length. The State Legislature has dedicated $150,000 to trail planning, with funding coming from vehicle registrations and the OHV portion of the fuel tax. The DNR claims it will have some money available for road maintenance along the route, part of which, ironically, follows minimum maintenance roads.

When completed, the route will be marked with signs, as well as depicted on a map and website. In essence, it will be no different than existing driving tours for fall colors or birding. The DNR is administering the project. However, the agency contracted the National Off-Highway Vehicle Conservation Council to manage the project with the cooperation of Minnesota 4 Wheel Drive Vehicle Association.

Beginning in 2017, the DNR has held “listening sessions” in communities along the proposed route. Last week, the agency held a second meeting in Grand Marais. Since the proposed route passes my home, I decided to stop in and hear what they had to say. I arrived a little late. Judging by the pile of protest posters lying on the sidewalk outside the county courthouse door, I missed the photo op. Inside, the meeting room was packed. I stood in the doorway with another fellow and listened to the presentation.

The first thing that struck me was the DNR presenters didn’t seem to have firsthand knowledge of the proposed route. Apparently, no one has driven the whole thing. Granted, it is 400 miles long and follows roads marked on every map, but view on a computer screen is nothing like what you see out the windshield. Since the roads listed for the proposed route as it crosses Cook County, where I live, range from well-maintained gravel roads to forest access roads best-suited to high clearance vehicles, first-hand knowledge would have provided clarity for everyone attending the meeting.

The second thing I noticed was the Border to Border proposal faced organized opposition, at least in Cook County. A few meeting attendees still carried their posters. Some were wearing blue T shirts emblazoned with the slogan “Nevertheless, she persisted…” There were no organized supporters of the route in attendance, although a fair number of folks in the room were not opposed to it.

The meeting followed a predictable path. The DNR provided basic information. Trail opponents asked pointed questions. Some county officials seized the opportunity to grand stand and pontificate. One angry fellow left early and swore at a woman standing outside before tearing off on a motorcycle. It was an unfortunate incident, but by no means characterization of the overall meeting. Some of the folks unopposed to the route declared concerns about the proposal amounted to much ado over nothing.

Even though the Border to Border route rolls right by my door, I must admit to being ambivalent about the proposal. Aside from the foul-mouthed fellow, I don’t disrespect anyone’s opinion about it—pro or con. But attending the meeting did get me thinking.

Here on the North Shore, trail proposals are routine. In addition to Highway 61, a designated national scenic byway, we have a labyrinth of trails to accommodate varied user groups. Starting at Lake Superior, we have the Water Trail for kayakers, the Gitche Gami trail for bicyclists, the North Shore State Trail for snowmobiles, the Superior Hiking Trail for hikers, and ever-increasing trail networks for cross-country skiers, ATV riders, mountain bikers and even grouse hunters. While I sometimes use one of these recreational trails to walk into a trout stream or drag a buck out of the woods, for the most part, they are not part of my outdoor experience. Yet I understand the need for their existence. With trails, natural resource managers can bring some order to the chaos of the expanding, sometimes conflicting array of recreational users who enjoy the North Shore.

At the meeting, DNR representatives said the Border to Border route designation could open up a new source of funds for forest road maintenance along the route. A man I know who attended the meeting was doubtful this will make much of a difference. He pointed out to me the deteriorating condition of some state forest roads and campgrounds. The U.S. Forest Service also doesn’t have sufficient funding to take care of its road network in the Superior National Forest.

The lack of maintenance extends to signage. There was a time when campgrounds, lake accesses, trout streams and other relevant, roadside landmarks were marked with signs. In addition to helping forest users find their way, the signs also gave passerby a sense of place. You may have never given a thought to casting a line in Whiskeyjack Creek, but if someone told you they had hunted grouse “back in that Whiskeyjack Creek country,” you knew where they meant because you’d seen the sign where it crossed the road. Now, lacking signs, you may not even realize that ribbon of clean water (and hundreds more) even exists. I once asked a forestry bureaucrat why his agency no longer recognized roadside lakes, streams and other landmarks with signs. His answer was that it was no longer necessary, because everyone uses GPS these days. A lousy answer, but safer than saying his agency is so starved for funding that it can no longer afford road signs.

Walking out of the Border to Border listening session, I mostly was feeling sad. I tried to imagine what it would be like to buy a 4-wheel drive vehicle and lack the confidence to get out and go for a ride without having a marked route to follow. I wondered why the folks attending the meeting weren’t upset, indeed outraged, that the diminishing infrastructure in our state and national forests is met with political indifference. But mostly I was sad that we devote so much passion to battles over how we spend our leisure time. Our collective energy could be put to much better use. 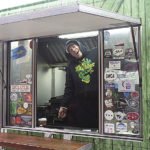 Food Truck Season is Here in the North

As go the monarch butterflies, so do we?