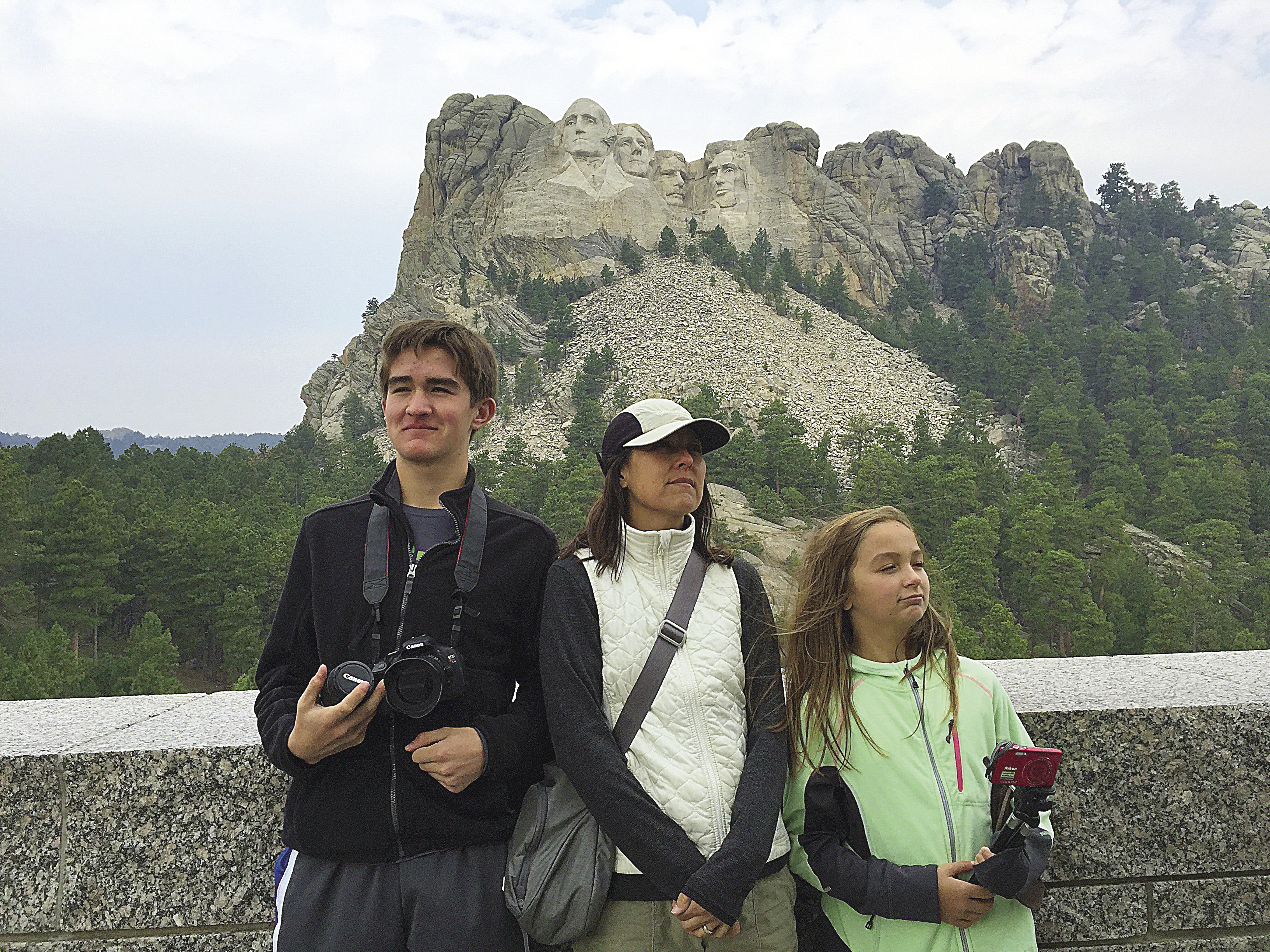 Italy. New Zealand. Iceland. Paris. We talked about these places over the supper table. My bank account and calendar both vetoed those options. I proposed a road trip and my crew approved. My son trained all summer to race his mountain bike this fall. He demanded some good behavior on this vacation so his training wouldn’t fade. We came up with five goals: be safe, have adventurous fun, eat healthy and exercise, have a good attitude and take notes.

I heard good things about Spearfish, South Dakota, so we headed there first with a truck full of hiking shoes and bikes. I drove the longest the first day (750 miles) since I was fresh. We stopped off in Chandler, Minnesota, of course. The locals looked at us funny as we snapped pictures next to the sign.

We continued our southwest diagonal through the cornfields and white windmills. Road weary in the late afternoon, I hit the turn that led to Badlands National Park. “Shall we?” I asked half-heartedly. “Adventurous fun!” they said, so we made our way through the park.

It was the right call. The greyish-red spires of this surreal landscape were impressive. We stopped at the visitor center and my daughter used her money to buy herself a small, stuffed bighorn sheep. I gave her a hard time since we hadn’t seen one. Then we rounded a turn and a dozen bighorn sheep were crossing the road. That’ll teach me.

We spun through the Wall Drug tourist trap because 300 miles of billboards in South Dakota told me to do it. My bloodshot eyes squinted through the splattered bugs at the bloody red sun as it set through the sky filled with smoke from the wildfires in the Pacific Northwest. It was almost too far, but we made it to the Spearfish exit. We headed to Killian’s Tavern and knew we were in the right place, since the entire restaurant had mountain bikes hanging from the ceiling.

On our first full day in town, we drove to the west and visited Devils Tower. We learned that the locals called it “Bear Home” or “Bear Lodge” for eons, until one surveyor came by in the 1800’s and slapped the current name on it. We walked around the base and saw prayer bundles among the trees and incredible views of this dramatic mountain.

The kids had just watched “Close Encounters of the Third Kind” this year and were excited to find some aliens. Amazingly, the National Park gift shop didn’t have a single little green man. We stopped for lunch outside the gate and they had a whole glass display case full of “Close Encounters” memorabilia. It was a “close” one, but we got our fix.

We got back to town and saddled up for a ride on the paved path that meanders along Spearfish Creek through the middle of the city. We rode south to the mouth of Spearfish Canyon. Then we backtracked north and stopped to dip our toes in the creek in a pretty city park. Cold and clear as gin. A successful first day in the Black Hills.

We left our basecamp the next day and retraced our steps to the east toward Mount Rushmore. It was extremely windy, but that didn’t hurt the views of this impressive monument carved into the side of the mountain. We wound our way through the mountains over the Needles Highway to Custer State Park. One of our family friends said we needed to drive this road. It was just the kind of surprise we wanted. My old Dodge ground its way up the mountain passes and hairpins surrounded by dramatic spires of rock. The real showstoppers were the many single lane tunnels directly through the rock. In Custer, South Dakota, we stopped for gas and we decided that it was time for an air freshener. It was only day two and the truck was a little swampy. I got a blueberry scented one to match our Minnesota plates.

We drove north to find Crazy Horse emerging from a mountain after 70 years of excavation. The museum at the base of the mountain was almost as impressive as the giant sculpture. I was surprised to learn that it’s all private money funding the project. So, the kids bought some dreamcatchers to help power the sculpting. We were also interested to learn that the dreamcatcher originated with the Ojibwe. Another reference back to Minnesota. They brought them into each hotel for the rest of the trip to watch over us while we slept.

Earlier, I poured over maps to find a spot along the George S. Mickelson Trail to ride our bikes. I found a tiny town called Mystic where this rail-trail went into some dramatic hills away from the highway in the heart of the Black Hills. It looked like a good spot to ride on the way home from our day of tourism. We pulled into the lot after a long stretch of dirt road. I struck up a conversation with some nice ladies manning an aid station. They were supporting the Lean Horse 100 ultramarathon. I asked if this was a nice section of trail. They said I was at the prettiest section of the 109-mile trail. We had a blast riding the old railroad bed over trestles and through tunnels at the end of a sunny day. We cheered on a few ultramarathoners that looked pretty darn good, considering they already ran over 50 miles.

Spearfish day three was all about mountain biking. I researched trails to find something family-friendly. Nothing beats local advice, so I asked around. People recommended the Little Spearfish Trail about 15 miles south of town, so off we went. We drove past a spot where some winter scenes from “Dances With Wolves” were filmed. We stopped at a campground for the ladies to visit one of the vilest pit toilets they’d ever smelled. Then, at the trailhead, I discovered that the front axle of my daughter’s bike was missing a bolt. Duct tape to the rescue. A rough start, but we were finally cycling.

An hour later, I realized we were having Type II fun. The kind of adventure that is only fun when you look back from the safety of the future. The trail went 1,000 feet straight up in 3 miles. We all walked our bikes at some point due to the grade. Most of the trail was bordered by chest deep grass and brush. At the top of the ridge, where I promised my daughter we were “almost there,” we ran into a logging operation where I lost the trail. I can only imagine what the Bobcat driver thought as he suddenly saw a pudgy man in Spandex walking out of the woods to ask for directions. He saved us since he was actually working to rebuild our trail after the timber sale.

We rolled over the summit and thrashed down the hill. My rattling bike rattled louder. My rear hub was coming loose. I felt like somebody was pulling my leg when they said it was a family loop. The trail finally met a pleasant creek and we followed it back to the car below some dramatic red cliffs. The last half hour was quite nice. The first several hours? Not so much.

We limped into town with our two broken bikes and walked into the Two Wheeler Dealer bike shop 20 minutes before closing. Zack, the mechanic, fixed my daughter’s axle and my hub. My wife decided to buy a cycling jersey as her souvenir from taking her “comfort bike” over a giant mountain pass. Kudos to her and her bike.

Shelley and Grace hung out at the pool while Sam and I went for round two at sunset. We found the Tinton Trail just outside of town. We were intimidated since it was part of the Dakota 50 mountain bike race, but it was a nice flow trail with no weeds and a lot less vertical than we did that morning. Next time, Team Chandler will go directly here without bushwhacking first. 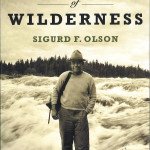 The Meaning of Wilderness 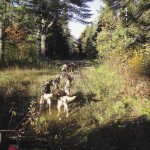