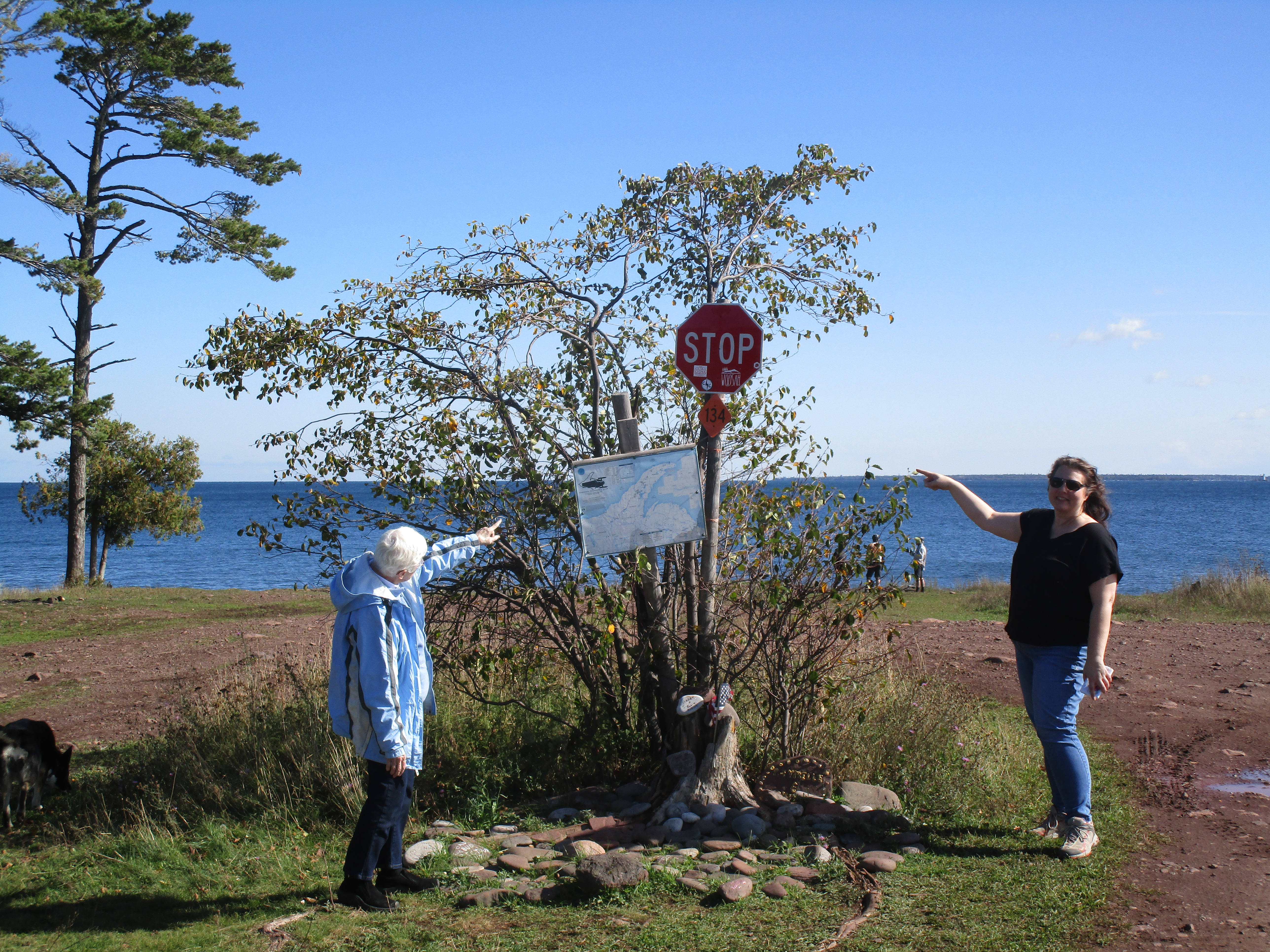 This stop sign seems to overstate the obvious. It marks the end of the road to High Rock Harbor at the tip of Lake Superior's Keweenaw Peninsula. | SHAWN PERICH

If Michigan’s Upper Peninsula was a misshapen mitten, the Keweenaw Peninsula would be the thumb. This rocky appendage juts defiantly into Lake Superior, its hardwood, pine and hemlock clad ridges rising hundreds of feet above the crystalline blue. We had already been atop Brockway Mountain, where you can look beyond the ridges across the limitless lake that disappears into the horizon. We’d been to the lakeside monastery where the monks make and sell wild berry jam.

Now we were passing through Copper Harbor, the tiny community at the tip of the peninsula. We drove through Fort Wilkins State Park to the end of the pavement, where a monument at the center of the turnaround marks the northern end of U.S. Hwy. 41. “We” was my business partner Amber Pratt, my mother Terese, two yellow Labs (Rainy and Tanner) and Evee, Amber’s husky mix. Rainy and Tanner rode in their kennels back in the box. Evee shared the backseat with Mom. It was a sweet arrangement for both of them.

Amber and Mom loom large in my life, although they don’t often appear in this column. This was a business scouting trip. Mom was along for the ride. As for the dogs, they go where we go. We were on our third and final day of exploration along Lake Superior’s South Shore. Our drive home would take us about a third of the way around the world’s greatest lake.

Given the length of the drive, prudence would have suggested heading back the way we came, but prudence wasn’t along for the ride. A sign pointed straight down a forest road, saying High Rock Harbor, 7.5 Miles.

“We should,” my passengers replied.

And so we did. The road was in pretty good shape when we started out. Within a mile, I was complaining the potholes were hidden in the shady spots. After another mile, I mentioned that we seemed to be going endlessly downhill. The potholes started becoming mudholes. The road was wide and seemingly well-traveled, so we kept going.

Occasionally we passed signs warning of logging truck traffic, but we saw none. A couple of times, I saw the boxes associated with buried power or communications lines. Where they went was anyone’s guess. We were deep within a wild, uninhabited forest. How many miles was it to High Rock Harbor?

We came to a puddle that flooded the road like a small pond. The road bed was solid so we drove across it. Then we reached a fork. The road we were on continued straight ahead. Another, somewhat lesser road went left. Tacked to a tag alder was a six-inch cardboard sign marked High Rock with an arrow pointing left. It was unlikely the increasing rough condition of the road would improve in either direction. I decided to turn around, even though my passengers wanted to forge ahead. We hadn’t retreated a quarter mile when we met an approaching pickup. The driver motioned that he wanted to talk.

“Did you make it there?” he asked.

“You’re close. Keep going,” he said. “The road is good and you won’t scratch your truck.”

Although my truck is little more than a year old, I’m long past any hang-ups about scratches. But it was what he said next that turned me around.

“It’s not far to High Rock Harbor and that old NASA missile site,” he told us.

Missile site? What in the heck was that? Before we could ask our friend was gone. A second pickup passed by as we turned around. We followed that truck down the left fork marked with the cardboard sign. In the rearview mirror, I saw an SUV following us. Suddenly, we’d gone from solitude to joining a convoy.

The road got no better. But I didn’t scratch my truck. The SUV behind us was always in sight until it wasn’t. That was before we crossed the flooded roadbed downstream from a beaver dam. Then we encountered an oncoming truck. We had questions. Yes, High Rock Harbor was ahead, about a mile or so, we were told. A couple of right turns lead to the lake; stay on the main road. The road to the rocket site goes left. Keep on the main road. You’re almost there.

A half mile on, the truck ahead of us pulled to the side. Turned out the driver was with the DNR. He figured the folks in the SUV behind us had chickened out, so he was going back to look for them. Everybody was headed to the ribbon cutting for the new, 14-mile single-track mountain bike trail. Now the convoy was destined for a ceremony…at the end of the world.

Pretty soon, we could see the glimmer of water through the trees. We emerged from the forest into a grassy opening on the rocks above Lake Superior. We were not alone. We saw people camping in tents. We saw mountain bikers; skinny people wearing helmets and tight clothing, most older than me. Other people, not so skinny, arrived on ATVs. We parked by the other pickups, in the shadow of what may be the most preposterous stop sign this side of the Soo. Drive beyond it and you’ll be in Lake Superior.

The vibe was laid back. We were comfortable allowing the dogs to run free, because they ignored the people and headed for the beach. We followed the dogs and soon found some elbow room.

The shore was a mix of rock outcrop and pebble beach. Offshore was Manitou Island and its historic lighthouse. We wandered along it, picking rocks and enjoying the scenery. The dogs introduced us to a couple who were travelling the country and homeschooling their children. He owned a real estate company in Florida. She managed a mortgage company. Both used online conferencing to meet with their staff and do business. They were nice people.

We didn’t make it to the Keweenaw Rocket Range, which I learned later from Wikipedia was used in the 1960s and 70s to collect meteorological information. About all that remains at the site is a cement slab and a small monument. Maybe I’ll go there on a future visit to the Keweenaw Peninsula.

During our wanderings, we missed the ribbon cutting ceremony. We passed a small crowd of mountain bikers and dignitaries as we drove away. The three of us were satisfied with our impromptu adventure. I’m sure three wet and tired dogs were happy, too. 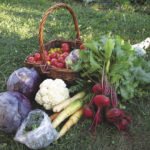 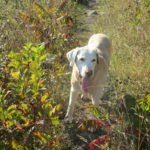 Nostalgia in the Grouse Woods