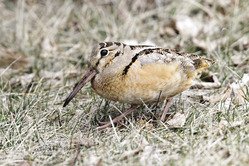 The plumage of the American woodcock allows it to virtually disappear on the forest floor. | Michael Furtman

Cresting a rise on the way back to my truck, I watched my black Lab Bella course through the woods. Her tail began to spin and wag – a sure sign she was scenting a game bird – before she suddenly stopped, and came to a point.

I inched forward, camera ready. Crouching, in front of her was a smallish buffy orange-breasted bird. Before I could take a photo, it twittered into flight and disappeared over the same rise we had just crossed. I looked around, picked out a few landmarks to aid my memory, and continued to the truck, intent on returning without the dog.

What we had found and flushed was an American Woodcock, a delightful and strange member of the shorebird family. Yes, shorebird. Somewhere in its past, this shorebird adapted to living in the forests of the eastern United States and Canada. Minnesota is at the eastern edge of its breeding range, which doesn’t extend more than a couple hundred miles north of the Great Lakes. Like all shorebirds, it migrates south for the winter, spending those months largely along the Gulf Coast. Unlike other shorebirds, the woodcock is a game bird and is passionately hunted by its devotees. The only other shorebird that is also hunted is the similarly sized and shaped Wilson’s (common) snipe.

Here in Northern Wilds country, the woodcock is a common breeding bird, though not commonly seen. Secretive and tending to live in thick, brushy country that is often damp, it just isn’t the kind of bird you’ll stumble across very often, and if you do, it is just as likely to sink to the ground where its mottled brown, black and tan feathers allow it to disappear into the leafy forest floor while you saunter past it unawares. Many of us, however, do anticipate their early spring arrival, because at that time, just at dusk and into the darkness, the male woodcock performs an energetic aerial mating display that is just plain cool to watch.

From an opening in the forest, the male woodcock launches himself nearly straight up into the air, the wind in his wings making a high twittering sound. At the top of his rise, he circles, causing the twittering of his wings to come in well-spaced bursts. Finally, he plunges toward the earth, and the wing-sounds become louder and more chirp-like.

You might think that just because Bella and I found a woodcock in the woods, it would hardly be worth remembering where it was. After all, what are the odds it would be there when I later returned? What had me excited is that this bird was near Lake Superior, in an area of short turf that received afternoon sun, was protected by spruce trees, and so was free of snow. Most of the rest of the landscape was still covered in the deep snow of the never-ending winter of 2012-13. It was my hope that he’d stay to take advantage of the snow free area. And he did.

I spent the next week, on and off, searching for and photographing this fascinating bird. I was able to watch him hunker down when he thought he was in danger, sinking into the leafy duff until he was invisible. I once found him tight up against a tree trunk, head under his wing, sheltering against yet another snow squall. And I watched him successfully capture and eat numerous earth worms and other tidbits when he did venture out to feed.

Woodcock feed by probing the ground with their long “sandpiper-like” bill. But unlike sandpipers, they have very, very short legs better suited for hunting near the ground rather than wading. Just how he hunted was fascinating.

As he strutted about, the woodcock would pump his body up and down, one leg in advance of the other, moving ahead slowly and steadily. I can only speculate what this technique accomplishes, but I can think of two things. First the rising and falling may allow him to triangulate his hearing, because he didn’t just walk along randomly probing. When he did plunge his bill into the soil, it was because he believed something was there. Most of the time, he came up with a grub, worm, or insect.

The other function might be an attempt to drive prey toward the surface through vibrations created by his rhythm, or cause things to move so that they can be heard. I’ve watch Hermit Thrushes, another forest bird that feeds on much the same foods, stand with one leg trembling, as if in uncontrollable shivers. I suspect those vibrations also help locate food or cause it to move so that they can hear it.

Whatever the purpose – and I’m sure there must be one – his bobbing walk was both charming and humorous. Had the weather conditions not been just perfect to delay his migration, had Bella not found it first, I would have missed one of the most enjoyable weeks of my photography life. For while the woodcock may be the shorebird that got lost in the woods, they are so well adapted to it that few of us will ever otherwise encounter one. If you ever do, take the chance to sit quietly and watch. You’ll likely never get another opportunity! 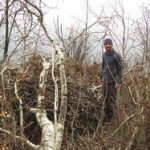