Sometimes a simple question is hard to answer. The other night, during a telephone interview with the Ticket Outdoors on Twin Cities radio station WGVX The Ticket 105, I was asked to name my favorite fish.

“It’s the brook trout, right?” one of the Ticket hosts said. “If you only could fish for one fish, that’s what it would be.”

My answer was brook trout…or steelhead…or any trout and salmon…and walleyes aren’t far behind. I could have tossed in crappies, which I rarely have an opportunity to catch or Atlantic salmon, which I’ve fished for once or tarpon, which I’ve never experienced. Then again bluegills and bullheads could make my list.  While I’m mostly a trout guy, it’s the act of fishing, rather than the species I catch, that keeps me coming back.

As for types of fishing, casting flies is my first love, but most years I spend as much or more time trolling on Lake Superior or jigging for walleyes. I like watching the sun rise over limitless Superior or seeing it set into the black spruce lining the shoreline of a northern walleye lake. Actually about the only time I don’t enjoy fishing is during the heat of the day. Slow-cooking in the hot sun isn’t my cup of tea.

Sometimes people ask if you prefer hunting over fishing or vice versa. That, too, is a question difficult to answer. If it was October year-round, I’d move to South Dakota and hunt pheasants. I like chasing North Shore whitetails in November, too. The prime times for hunting are relatively short, so I rarely fish during those times. But I can’t say that I like hunting any more or less than fishing.

The same is true for gardening. During May and June my fishing is often interrupted to plant the garden and take care of the yard. In the midst of pulling quack grass, sometimes I yearn to be on the water, but that doesn’t mean fishing beats gardening. In fact, since I’ve been eating fresh walleye fillets with just-picked salads lately, the two really go hand in hand.

It’s hard to play favorites when you have as many excellent ways to spend your outdoor time as are available in Minnesota. Sometimes, though, you must make choices. In the spring, I often choose steelhead fishing over turkey hunting, because I can travel for a few days to do one or the other, but not both. It’s been years since I’ve done any spring beaver trapping, but I like that, too. Because I have dogs, bird hunting tops my fall ticket. Most days, I’ll pick upland birds, ruffed grouse or pheasants, over waterfowl. For me, sitting over decoys soon becomes boring unless the ducks are flying. During our 16-day rifle deer season, I do nothing else.

Picking and choosing one fish or activity over another in an exercise in futility. For everything there is a season. I prefer to experience all of what I like outdoors at the proper time of year. The sum of the whole defines my way of life.

A second question asked by the Ticket Outdoors crew gave me pause: How does the hunting and fishing on the North Shore compare with a few years ago? It was tough to give an off-the-cuff answer. I said that deer numbers are down at present and that stocking cutbacks in lakes managed for stream trout had somewhat diminished the fishing. Overall, though, hunting and fishing along the North Shore is as pretty darned good.

Reflecting on the question after the interview, I realized my answer missed a couple of key points. In northeastern Minnesota, we no longer have the opportunity to hunt for moose. Trappers are finding fewer martens in the forest. Even still, we are far better off than hunters and anglers elsewhere in the state. We have the tragedy of Mille Lacs, where walleyes are in big trouble. In the south and west, the loss of Conservation Reserve program grasslands has triggered steep declines in farmland pheasant and deer populations. These are big, mainstream issues directly affecting a broad slice of the state’s hunters and anglers, not to mention the businesses that serve them.

If someone could wave a magic wand and make those problems go away, they would have done so by now. Rooted in politics and economics, the solutions necessary to restore Mille Lacs walleyes or whitetail and pheasant habitat will take years to reach a successful completion. In the natural world, it’s much easier to lose a good thing than it is to bring it back.

Given the scale of the problems at Mille Lacs and across the farming region, returning to the good old days of fishing and hunting that we experienced just a decade ago simply may not be possible. Despite this grim reality, we can’t toss in the towel. Our much-touted hunting and fishing heritage deserves better than that. Minnesota contains a wealth of fish and wildlife resources. We can’t allow politics and greed to further diminish them. And we have to get back as much as we can of what’s been lost. After all, Minnesotans ought to be able to go fishing on Mille Lacs and bring home walleyes for dinner. 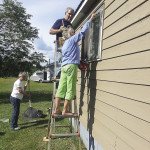