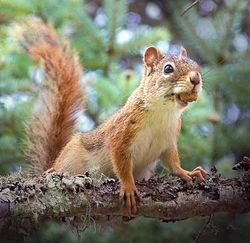 It’s hard to mistake the chattering of the red squirrel for anything else in our northern forests, whether you’re pleased to hear the sounds of wildlife or want it to be quiet lest it gives away your hiding place. Whatever you think of them, these rodents are a significant part of the forest ecosystem with natural habits that ensure the growth of the woodlands they reside in.

The North American red squirrel, or Tamiasciurus hudsonicus, is a tree-dwelling rodent with reddish-brown fur that changes to a deeper red during the winter months. It has a cream colored underside and white around its dark eyes. This small squirrel averages 11 to 13 inches in length including tail and weighs around half a pound.

Autumn is an important time of year for these squirrels and for the forest land they live on. While red squirrels stay active throughout the winter, they do gather a wide variety of seeds and nuts over the summer and fall to be cached (stored) and eaten at a later time when food is not so plentiful.

The larger storage areas or piles are often called “middens” and are generally conspicuous in squirrel territory. Common foods stored include cedar, pine, fir, and spruce seeds and cones, all kinds of nuts, buds, mushrooms, berries, and tree sap. Squirrels create some smaller temporary caches during the growing season over a wide area. They often forget where some of them are located. If left in an ideal location these forgotten seeds will grow new life, perpetuating the cycle.

In addition to their mainly herbivorous diet, red squirrels may also prey on young small mammals or birds, most likely for the extra protein. They have a very fast metabolism and must consume foods high in fat for energy.

The red squirrel is active diurnally and nests at night in tree cavities or shelters built out of sticks and grass, usually on the branches of spruce trees. It will establish a territory when it reaches adulthood which it will defend year-round throughout its lifetime. It may travel some distance from its territory if it cannot find enough food to sustain itself.

These squirrels are solitary and only come together in late winter to mate or fight other males for access to a female. A single female may mate with many males while in estrus. Offspring are born in litters of one to five, hairless and helpless. They must leave their mother and create their own territory before their first winter or they probably will not survive.

Red squirrels are found throughout most of Minnesota wherever there is adequate forest habitat. A few thousand are hunted each year, but because they are small they do not provide enough meat to keep most hunters interested. They are an important part of the food chain and are consumed by many predators. The American marten, or pine marten, relies heavily on the red squirrel to survive. Lynx, bobcats, foxes, coyotes, owls, hawks, weasles, fishers, and domestic cats also frequently make meals out of this quick, vocal resident of our northern forests. 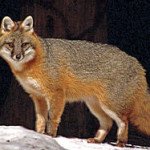 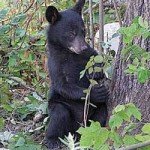