A recent column about the continuing northward expansion of Minnesota’s wild turkeys prompted a few emails from folks who wanted to share their thoughts on the topic. As may be expected, some folks are fine with seeing wild turkeys arrive in northern Minnesota while others are concerned how this large invasive species may disrupt the ecosystem. Some folks welcome their arrival.

“I have land southwest of Cloquet and the turkeys are all over the place. I bag one there every year, great fun. The grouse/woodcock hunting has been great too,” wrote Mark after reading my column. He also pointed out the bird’s northward movement may be associated with a warming climate.

And Mark asked, “I thought Minnesota had a native population back in frontier times, but they were extirpated by humans…then brought back in the ’70s. Not true?”

This is two separate questions. First, are turkeys native to Minnesota? I believe when the first introductions to the state were occurring, Minnesota was considered to lie north of their original range. Later, as the birds became established in the southern corner of the state and biologists began stocking them elsewhere, the story became the birds had been native and were extirpated from the state during settlement. Now, according to the Minnesota DNR website, “The restoration of the wild turkey over the past 25 years is one of Minnesota’s greatest conservation success stories.”

Sorry, but this statement should get a “pants on fire” rating for truthfulness. Consider this story lead written by Jim Gilbert for the Sun-Patriot on November 21, 2013, “The home range of the wild turkey is the eastern, southern, and southwestern United States, and down into Mexico. There is no positive evidence that this species had ever existed in Minnesota before European settlement, but they were introduced into the southern part of the state as far back as 1936.”

Restoration suggests we have brought back a creature that previously existed in the state. If indeed turkeys existed here prior to the pioneer era, they were found only in the extreme southern edge of the state. Far closer to the truth is that wild turkeys were successfully introduced to Minnesota. “Invasive,” then, is an appropriate term for describing the turkey expansion, because the birds were deliberately introduced outside of their natural range by humans and have moved well beyond the introduction sites.

This concerns some readers. Larry, who lives in northern Crow Wing County amidst thriving turkey flocks, is concerned how the birds affect other wildlife, including deer. He wrote, “I don’t know if anyone, DNR, is studying the turkey impacts on deer. Will this large flock of turkeys ‘self-adjust’ its population through disease; a disease that might be transmitted to other native fowl, bird populations, or become a host in the life-cycle of other undesirables?”

Larry did some research into what, and how much, turkeys eat. On the Wisconsin DNR website, he discovered a 15-pound turkey will eat five pounds of food per week. He also learned that the winter home range of a turkey flock is 160-320 acres. Armed with this information, he did some math to determine the local impacts of Crow Wing County turkeys.

He writes: “How many versatile-diet turkeys per square mile in MN counties? I’d say average summer adult population around here is 20-30 birds per 320 acres. If they eat 5 pounds per week, that means they take 5,200-7,800 pounds of mostly acorns out of my 320 acres of limited-in-oak woods per year. How does that affect my local deer? Will berry-eating turkeys mean that more bears will come to human garbage cans for food? Will turkeys eat the insects needed by forest song birds? How do the large turkey scratch areas affect the detritus and vegetation growth? Flocks of 20-30 turkeys scratch-up huge areas when they find a hot food source.”

A wealth of astute observations came from Dean, who lives in northern Wisconsin and hunts turkeys there. Noting that he has seen turkeys appear to be eating lichens or moss on the ground and on tree limbs, eating white cedar fronds during the winter and feeding on the vegetative mat of a peat bog, he writes, “Turkeys seem to be very willing to eat anything they can find. Doesn’t have to be strictly acorns, seeds or worms. During the winter, the birds around here disappear. You’d swear there wasn’t a turkey in Oneida or Vilas counties. My guess is they are in the cedar swamps or sticking very close to houses where people are feeding, despite the feeding and baiting ban.”

The “eat anything” aspect of turkeys is worrisome to those of us who wonder what native species may be displaced and destroyed by the birds in their new, Northwoods home. Some folks believe there is a correlation between the rise of turkeys and the decline in ruffed grouse numbers. Dean writes, “We have had rumors here for years that turkeys displace grouse, or at least reduce their numbers. True? Don’t know. I do know grouse numbers in southwestern Wisconsin have tumbled significantly over the last 30 years. Is it all due to habitat change? I can’t say. I know the DNR does not blame turkeys for any part of the grouse number tumble, but I would not be surprised at all if turkeys, upon flushing a hen grouse off her nest, pecked up the eggs. Now, how many turkeys per square mile would it take to bump into enough grouse to have an impact on their numbers? Don’t know. But I’ve watched turkeys spread out and move through a piece of hardwoods. They don’t miss many square inches.” Given that description, it is reasonable to assume that were the wild turkey not a popular game bird, state wildlife biologists would be taking active measures to prevent their expansion into new habitat.

If past history is any indication of the future, wild turkeys in Minnesota will continue to pioneer new, northern territory. Dean has observed during the spring hunting season that turkeys are continually on the move, scratching, pecking and walking. He believes turkeys in northern Wisconsin’s forests may travel as much as three miles per day. Snow and cold may not deter them. Dean writes, “They can roost in a tree for up to two weeks before they starve to death if the snow is too deep for them, but I have seen turkeys moving through powder two feet deep without a great degree of difficulty. They pack down trails just like deer.”

Such movements could explain some of the Minnesota sightings that seem to be well north of the turkey’s known range. What is difficult to explain is the wildlife management community’s apparent lack of curiosity about ecological consequences of the wild turkey’s northern invasion. 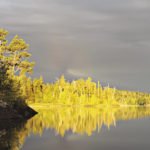 Do our black flies and mosquitoes scare cowboys?