Folks who fret that kids aren’t spending enough time outdoors ought to meet Mara MacDonell, a high school senior living in Grand Marais. She’s not only enthusiastic about the outdoor life, but she is also planning for a career in conservation. So what gives?

“My parents are very outdoorsy,” Mara explains. “They first brought me to the BWCAW when I was a year old. I saw wildlife and was exposed to wilderness from a young age. I’ve just begun to realize how lucky I am.”

Her luck includes an introduction to YMCA Camp Menogyn when she was in sixth grade. Located on West Bearskin Lake along the Gunflint Trail, Menogyn is a place that teaches young people outdoor skills. More than that, Menogyn gives kids the opportunity to build their skills—and their self-confidence—with repeated outdoor experiences. 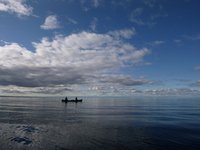 Mara first went on a five-day canoe trip in the BWCAW through Menogyn. Over the years, she went on longer trips, which led up to the incredible experience she had last summer—a 40-day canoe trip across Canada’s Northwest Territories and Nunavut with four other girls and a 24-year-old female guide. While Menogyn attracts campers from across the nation, all of the girls on this trip were from Minnesota.

“The trip was by invitation only,” she says. “You need to have demonstrated your outdoor skills on previous trips.” 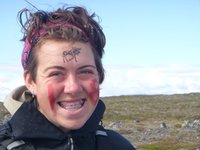 The group flew out of points North Landing, Saskatchewan to the Dubawnt River in the Northwest Territories, where they landed and unloaded in midstream. They spent the next 18 days going down the river, crossing into Nunavut and reaching Dubawnt Lake, the largest water body in the province. Two days of paddling on the lake brought the girls to the Slow River, an ironic name, Mara adds. They paddled upstream and portaged over a divide to reach the Kunwak River, which led them to Thirty Mile Lake, where they ended the trip.

“Our original route ended at the community of Baker Lake,” she says. “But we got behind schedule and had to end at Thirty Mile Lake.” 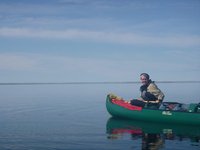 They flew via bush plane from a sand beach on Thirty Mile lake to Baker Lake. Weather, primarily wind, was the reason the group was delayed. While Mara was disappointed they were unable to complete the journey as planned, she learned that in the wilderness, plans can change. She also learned a lot about herself and gained self-confidence.

“The trip really changed my perspective on my own abilities,” she says. “We went 40 days without contact with other people.”

She also discovered a personal passion—whitewater canoeing. The Dubawnt River has huge rapids, most of which the girls were able to run. Since getting through the rapids without swamping the canoe and losing gear is the primary objective of long-distance paddlers, she learned how to how to scout and choose the safest route. Now she’d like to try recreational whitewater paddling, where thrills and occasional spills are part of the game. She got a taste of it on the Kunwak, which contains a lot of technical whitewater.

The group learned a little about the landscape and the creatures inhabiting it. Their journey began in the taiga, the northernmost edge of the boreal forest, where stunted spruce trees and scrub brush give way to scattered patches of open tundra. Here they saw moose and wolves. Eventually they reached the northern treeline and entered the tundra, where caribou roam. Once, Mara thought she saw a distant tree, but actually it was a caribou. Along the Kunwak River they saw golden eagles and a barren ground grizzly bear. One day they watched a wolverine chase a caribou calf, which escaped by going into the water. They also discovered the beauty of wide-open spaces.

“Every night we saw the most beautiful sunsets we’d ever seen,” Mara says.

While they were in the middle of nowhere, they did see evidence of people. Throughout the trip they passed by rock cairns left as markers by native people. In one area, they saw numerous jets flying overhead. In the last days of their trip they began seeing large inukshuks, stone landmarks left by Inuit people, as well as their tent rings and meat caches. They had an opportunity to learn more about the Inuit when they eventually arrived, via float plane, at Baker Lake.

“We finished our trip in an Inuit community where they speak their native language,” Mara says. “I now have friends from Baker Lake on Facebook.”

She made other friends along the way as well—with the girls who accompanied her on the journey.

“The girls on the trip became my best friends,” she says. “We shared a lot of laughs and we met our challenges.”

While Mara may not have another chance to take a 40-day canoe trip, her experience fueled new enthusiasm for the outdoors and the conservation of wild places. She will be attending Carleton College and wrote about the trip in a college application. Planning to pursue Environmental Studies in college, she hopes to one day become a lawyer specializing in environmental concerns. Along the way, she plans to continue spending time outdoors.

“I loved the whitewater paddling and just being out there,” she says. “I hope the outdoors will remain part of my life.”

Mara also points out that she worked for a year in order to pay for the trip and received some welcome financial assistance from Menogyn, too. Stone Harbor Wilderness Supply in Grand Marais supplied some of the gear for the trip. But she says any kid who really wants to see the wilderness can find a way to make it happen through Menogyn’s programs. It’s good to know there are still kids like Mara who want to get outside and places like Menogyn to help them make their wildest dreams come true.