After several days of travel and being cooped up in a motel for a conference, we were finally in the mountains. A tight schedule allowed for only one day of fishing, so we intended to make the very best of it. Three of us hiked into a remote trout stream in a western Montana wilderness.

“I’ve never seen anyone here,” said my friend Tom as we trudged up the trail.

We split up when we reached the small river, intending to leap-frog one another as we fished upstream. I headed downstream from my companions to start out. A short walk brought me to a deep pool. Since trout always face upstream, I quietly slipped around to the tail of the pool in order to rig my fly rod and tie on a fly. Doing so, I heard a noise in the brush. I looked up to see two fishermen. We exchanged pleasantries. They had started farther downstream earlier in the morning. I said there were three of us, just starting our day. Then they disappeared in the brush. Or so I thought.

Instead the fishermen stepped into the river 50 feet ahead of me and started casting.

“This is the best pool on the river,” one of them said to me.

In America, rude behavior is a fact of life, but I’m always surprised when I encounter it in an outdoor setting. Had the shoe been on the other foot and I happened upon the two anglers, I would have simply continued walking for at least couple of hundred yards before fishing again. That way, everyone could enjoy wilderness solitude and good fishing. I sure as heck wouldn’t step into a pool another angler was planning to fish.

Instead, it was up to me to move. As I walked around the two rude boys, I was sorely tempted to either give them a piece of my mind or to heave a big rock into the pool and frighten the trout. I thought about telling them that I had just one day to fish in Montana and had been dreaming about coming to this pristine place. Then I would say how their rude actions had just started my one day in paradise on a really sour note.

Yeah, I thought about saying it, but what would be the point? If I’ve learned anything in this life, it’s not to waste your energy on fools. It was far more personally productive to head up river and join my friends. Despite starting on a sour note, we went on to have a very enjoyable day (more on that at another time).

But the momentary rudeness got me thinking about how our actions outdoors may affect the experiences of others. I don’t claim to be the patron saint of etiquette. Last summer, I let my dogs run off leash in the parking lot for a busy hiking trail on the edge of a small city. Suddenly, I heard some commotion. My boys, two friendly but big yellow Labs, were greeting a young woman who was walking with her leashed dog and small child. I quickly ran over and grabbed both boys by the collar, but the damage was done. The woman was clearly shaken by the experience. And it was entirely my fault.

Sometimes, interactions with others can’t be avoided, such as when two hunting parties meet at a public hunting area on the opening day of pheasant season. The same is true on fishing openers, when crowded conditions may be part of the scene. But even those situations are no excuse for rudeness.

A few years ago, I was fly-fishing on a western trout stream while Vikki read a book in the truck. From the parking lot, she had a good view of the river and watched an endless parade of drift boats float past. A man with a young boy walked down to the river to fish from shore. She watched him help the boy learn to fly-fish. Just a small area of the river was accessible to them. The entire river was available to the drift boats.

Vikki was amazed to see that all of the passing drift boats made a few casts into the very place where the young boy was fishing. One boat even paused there and made repeated casts, likely wrecking the young boy’s chance to catch a fish. The man asked the two anglers in the drift boat why they chose to fish in the only place where the child could fish. The drift boaters just kept casting.

On occasion, I’ve had bad experiences with fishing guides. Once I walked a rugged mile to reach a remote pool on a steelhead river. A guide and his client arrived after me. The guide made some small talk and then asked me to fish elsewhere so he and his client could have the pool to themselves. He was crass, but I obliged his request. There was plenty of river to go around.

A friend unwittingly ran afoul of a guide on a Wisconsin trout stream. He was fishing his way down the river, a traditional steelhead fishing method. He stepped into a pool where no one was fishing. Before he could make a cast, someone he hadn’t seen started shouting at him from the bank. A guide and his client had claimed the pool for the morning and were “resting the water” after fishing there for awhile. My friend had words with the guide, but moved on. There was no sense in letting the guide’s rude behavior spoil his day.

The river where this incident occurred was public water, as were all other places mentioned in this column. Public waters are open to anyone with a fishing license. No one has a special claim to a public place. Nearly all anglers understand this. Unwritten rules of angling etiquette have developed over time to help us all get along. Actually, getting along is pretty easy. Just share the water and be polite to the other anglers you encounter out there. And never forget that the day you meet them may be their only chance to go fishing. Don’t let your rude behavior spoil it for them. 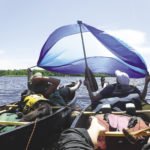