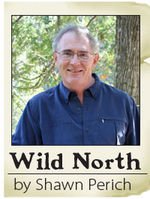 Last weekend Vikki announced she was giving up on feeding the birds for the winter, because she was overwhelmed by whitetails. The deer appeared every time as she came outside to fill her hanging feeders with sunflower seeds. Although she tried to chase them away, they’d immediately return. She’d seen as many as 15 at one time.

The primary problem was that Vikki can’t reach much higher than a deer, so they could easily empty her feeders. The solution was simple enough—raise the feeders. However, now Vikki must either carry a small step ladder on her feeder forays or sunflower duty will be added to my list of daily chores.

Hopefully, moving the feeders above the reach of the ever-hungry whitetails will be enough to make them go away. We don’t mind a deer or two stopping by to scratch on the ground beneath the feeder for fallen seeds, but we don’t like hosting a herd. When you have that many deer hanging around, they not only eat bird seed, but also browse on just about everything within their reach. I try to protect my small trees with fencing, but the deer still nibble on whatever they can. I have trees and shrubs over 10 years old that have yet to grow above the browse line.

Most of the deer in our yard are winter visitors that migrate down from the highlands to the North Shore for the winter so they can take advantage of the mild micro-climate. When the snow disappears in April, so do most of the deer, returning inland to their summer range. However, a few hang around all year, which is bad news if you like to garden. Deer accustomed to finding food in your yard all winter are especially destructive.

We know this from experience, because we are reformed deer feeders. During the 1990s we put out shelled corn for the deer, because we enjoyed watching them. It wasn’t long before we learned the error of our ways as we tried to cope with their year-round depredations. Even after we stopped putting out corn, the neighborhood deer kept coming around for several years. Apparently, a whitetail never forgets a free meal.

The trouble with deer goes beyond what they eat to what they carry. Deer are vectors for disease and parasites. Recently we learned a dog owned by one of our neighbors, an avid deer feeder, was diagnosed with Lyme Disease. Deer carry the tiny ticks that transmit the disease and, since there are better tick deterrent products available for dogs than there are for people, we’d like fewer tick-bearing deer in our yard. Whitetails also carry a parasitic brain worm that is fatal to moose. Since we live in moose country, I’m not crazy about feeding deer and improving their chances for winter survival, thus making the area less conducive to moose.

Fortunately, chronic wasting disease hasn’t appeared among deer or moose on the North Shore and, due to a lack of game farms, hopefully won’t ever show up here. I really feel for folks living in Pine Island, north of Rochester, where CWD was recently discovered in a free-ranging deer. The disease was already found on a now-defunct local elk farm not farm from where the infected wild deer was taken by a hunter.

I did some hunting around Pine Island during the 1990s and enjoyed the area. Back then, the elk farm was a novelty and it was fun to drive by the facility and see animals out in the fields. At that time, no one was worried about CWD, though wildlife biologists warned that deer and elk farming was an ecological disaster waiting to happen. They’ve been proven right time and again as CWD moved across North America, very likely in trucks loaded with game farm elk and deer.

The appearance of CWD in Minnesota’s wild deer is no laughing matter, though DNR officials say it is possible the disease was detected before it became widespread. Still, we have yet to see what steps the agency will take to eradicate the disease, if that is even possible. The infectious agent causing CWD is called a prion and remains viable in the soil for at least two years, meaning fawns not yet born could be infected with prions left behind by the deer killed last November.

CWD is similar Creutzfeldt–Jakob Disease in humans, a noncurable and inevitably degenerative illness that kills nerve cells and creates tiny, sponge-like holes in the afflicted brain. Despite similarities in the two diseases, no evidence exists that CWD is transferrable to humans. However, a form of the disease found in cattle can be passed to people. Regardless of the human risk, CWD is something Minnesota neither wants nor needs in wild deer populations.

So what is next? Around Pine Island, there may be fewer deer in the future as the DNR takes steps to eradicate CWD from the wild. But on a broader scale, I doubt Minnesotans will make the changes necessary to reduce the risk of spreading dangerous maladies like Lyme Disease and CWD among wild deer and their human neighbors. You can blame politicians or bureaucrats or whoever, but really the responsibility to reduce disease risks gets down to you and me. Minnesotans aren’t willing to take a step back and redraw the boundaries between deer and people. We don’t want to stop raising deer and elk in pens, to stop planting food plots to attract deer or to stop feeding deer in our backyards. And we can’t expect to stop the spread of deer-related diseases until we are willing to do so.