Although the North Shore State Snowmobile Trail is marvelous—approximately 150 miles of wide, well-groomed trail with awesome glimpses of Lake Superior and snow-covered ridges along the way—there are dozens of spurs off the main trail. And they are all worth exploring.

These spur trails are maintained by local snowmobile clubs, so they may not be as wide or well-groomed as the state trail. However, what they lack in speedy, smooth travel surface, they more than make up for in character. Just as a winding dirt road inland offers a different travel experience than a paved Highway 61 lakeshore tour, spur trails offer a slower and scenic change of pace. 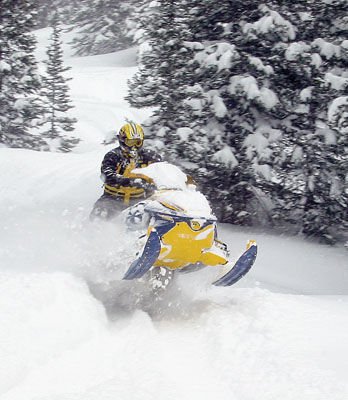 My family and I discovered such a trail by accident last winter. We started our day of snowmobiling in Grand Marais, taking the North Shore State Trail up to Devil Track Lake. We planned on just a short ride of about eight miles to the lake, but after riding the freshly groomed state trail and enjoying the warm January sunshine, we decided to travel further. We decided to take the state trail about 20 miles to Lutsen and have lunch at one of the restaurants at Lutsen Mountains.

We didn’t have a trail map, but we knew it was a pretty direct route on the state trail.
We set off toward Lutsen, zipping along at a fast pace. The scenery whipped by as my husband and I raced to keep up with my 20-something son and daughter-in-law. It was fun, but a little fast for my taste. I was glad to stop when we saw the first Lutsen trail system sign.

We didn’t have a trail map and we didn’t take a close enough look at the trail sign, because instead of ending up on “Caribou Trail” which would lead us to the ski hill, we somehow we ended up heading east, away from the ski hill. We were incredibly lucky. Not only did we not get hopelessly lost, we discovered the lovely “Muehlberg Trail.”

The trail is named after the late Robert Muehlberg, a founding member of the Lutsen Trailbreakers Snowmobile Club. It is one of those special trails that make you slow down, not just because of the hills and corners, but because of the beauty that surrounds you. On this particular January day, the evergreen trees glittered with a fresh dusting of snow and the boughs curved over the trail creating a magical passageway.

We left Muehlberg Trail for “Deer Trail” a steep and somewhat challenging downhill trail that leads to the power line and ultimately to Cascade Lodge. Deer Trail was a much-more traveled trail and moguls forced us to ride standing up. We stopped for lunch, a welcome respite, and wisely picked up a Cook County Snowmobile Club trail map to plan our trip home. However, we all agreed that Muehlberg Trail, the trail less taken, was the highlight of the day.

Stand Up Paddle Board: Walking on Water