You really don’t know how many beavers are out there until you’ve tried trapping them. Spend a little time making water sets with Conibear 330s and you’ll discover just how abundant they may be. Where you expect to catch one or two, you may nab a half dozen. Beavers are, after all, rodents.

I was reminded of this last week during a hallway conversation with trout fishermen at the 2016 DNR Roundtable. Someone asked me if I thought it would be prudent to remove a beaver dam on a steelhead river near my home. He seemed surprised when I didn’t think so.

“The dam is so high that it has to block fish migration,” he said.

“The dam doesn’t seem to have affected the run,” I replied. “And there are more beaver dams just upstream.”

The primary reason I don’t believe removing the dam would make a difference for trout is because it the beavers would soon rebuild it. Beavers are abundant throughout the watershed. As Nature’s engineers, they know the best places to construct dams, returning to the same places time and again.

Coincidentally, two days later I read a story in the Duluth News-Tribune by outdoor writer Sam Cook about an ongoing dispute of trout anglers and DNR fisheries managers vs. landowners who don’t mind beavers on their properties along the Knife River northeast of Duluth. The Knife is considered Minnesota’s premiere steelhead spawning stream, because many miles of habitat are available to trout running upstream from Lake Superior. Every autumn, the DNR uses a helicopter to survey the length of the river and its tributaries to mark the location of beaver dams. Then, with landowner permission, the agency contracts a nuisance control trapper to remove the beavers and then dynamites the dams to improve spawning and rearing habitat for trout.

Fisheries managers say beavers disrupt trout habitat in several ways. Beaver dams create obstructions that may block or impede trout up and downstream movement. Silt collects in the still water of ponds, covering the cobble and gravel that trout use for spawning and which supports invertebrate life at the base of food chain. Most importantly, during the summer, the ponded water is heated by the sun and may become too warm for trout both in the beaver pond and for some distance downstream.

Cook reported that along the Knife River watershed, the DNR authorized the removal of a peak 143 beavers and 99 dams in 2008. Since then, the agency has removed about a third of that amount of beavers and dams annually. In 2015, it removed 19 beavers and 10 dams. He reported a former contract trapper quit doing the work because he thought the agency was eradicating beavers from the watershed.

Local residents are divided over whether beaver removal is good or bad for the watershed. Cook reports the Lake Superior Steelhead Association generally supports beaver removal and has used Outdoor Heritage funds to plant conifer trees and restore shade to areas formerly flooded by beavers. On the other hand, a local organization called Advocates for the Knife River Watershed opposes beaver removal because their dams provide habitat for an array of native wildlife species.

Having spent a lifetime roaming the North Shore and its trout streams, I accept beavers as part of this place. I’ve caught brook trout and shot mallards on beaver ponds; and hunted deer and moose in their vicinity, too. Stored in my memory banks are the locations of dozens of ponds, many of which may be wet or dry in any given year. Beaver ponds are often a temporary fixture on the landscape. When their makers run out of food, generally the bark of nearby deciduous trees and shrubs, they move on.

It is hard to walk a mile through the North Shore forests without encountering beaver works. Some say their prevalence on the landscape is the result of forest management that favors the natural regeneration of aspen, their preferred food. I’m not sure that is entirely true. Three hundred years ago, when wildfire managed the landscape, this country produced a wealth of beaver for the fur trade.  The only time beavers have been scarce was early in the 20th Century, when their numbers were reduced by relentless, largely unregulated fur trapping. I’ve heard biologists say beavers are more abundant now in Minnesota than they ever were previously.

If that is true, then some measure of beaver control may be in order. For instance, hell hath no fury like a suburbanite or lakeshore owner who must contend with fallen trees or a plugged culvert. The responsible parties suddenly become “problem” or “nuisance” beavers that can be removed by any means with the DNR’s blessing.

I’ve done stories in the past about trout streams that became so choked with beaver activity they were no longer able to support trout or, presumably, other game fish. On some waters, a few years of work removing beaver dams and reducing beaver numbers has allowed trout populations to be restored, but I’ve never gone back to look at the long-term success of such efforts. I suspect that without constant vigilance, the beavers soon return.

Which brings us back to the Knife River.  If beaver activity is indeed an impediment to trout reproduction, then the annual removal of some beavers and dams may be the only way to keep their numbers in check. The only other option, and an unlikely one at that, is if somewhere in the world a great demand develops for beaver fur, raising the price of their pelts to a point where it becomes worthwhile for trappers to go through the tremendous amount of work necessary to trap and skin them. Aside from wolf predation, which may already be greater than we think, trapping may be the only way to consistently control beaver abundance. In Ontario, for instance, where trappers are assigned registered traplines, they are required to take so many beavers per year to keep the population in check.

The only other option is to attempt to manage shoreline vegetation to be less conducive to beavers (more coniferous trees and fewer deciduous ones), which is what the steelhead association hopes to do with its tree-plating projects. But that becomes difficult when shorelines are managed by many different landowners. Also, every waterway has places that are conducive to being dammed and have been used by generations of beavers. It may be nearly impossible to convince them to stop doing so.

At some point, we have to come to terms with a simple truth: We just can’t force Nature into a manmade management scheme without really making a mess out of things. Along the North Shore, beavers and their ponds are an essential part of the natural ecosystem. They and trout have long shared these waterways. Perhaps they know something we humans have yet to learn.

Cowboy militia seems out of place in the New West 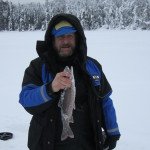 Better than a day of work