Grand Marais pilot Dan Anderson offers scenic tours of the Gunflint country where he guarantees you will see a moose. On a recent flight, he made good on that guarantee within minutes of getting into the air.

“There’s one down there,” he said as we passed over a shallow pond near the upper Cascade River. “It’s a pretty nice bull. See the antlers?”

Moose, which are not disturbed by the Cessna 172 passing overhead, are not the only critters you may encounter on a flight with Sky Dan. He has seen as many as five wolves along the runway at the Grand Marais airport, which is located along a ridge near Devil Track Lake. Occasionally, there may be deer or foxes along the runway, too.

When you are in the air with Anderson, you’ll learn a lot about the country. As you take to the air, he points out Eagle Mountain, Minnesota’s highest point. As the trees below the aircraft become small, he mentions that the mountain’s summit is still 400 higher than the plane’s elevation.

You also get a history lesson. Anderson talks about the pioneer logging era, when timbermen cut down vast stands of ancient pine. Flying over area lakes, he points out sunken logs left over from spring logging drives that occurred about 100 years ago.

A scenic flight can go inland to the canoe country or explore the North Shore of Lake Superior. Anderson says he takes up people who are looking for property in Cook County, loggers who want an aerial view of a timber sale, and even moose hunters who want to scout before going on their once-in-a-lifetime hunt.

For scenic tours, Anderson prefers to operate on fairly short notice—just a day or two. Often his customers are from outside of the area, so he likes to hear from them after they’ve arrived, in case their travel plans have changed. North Shore weather is famously fickle, so he likes to make flights when it is good. The best times to fly are the early morning and late afternoon when winds are light.

A pilot since he was in high school, Anderson is proud to say that he has been flying for over 25 years—nearly all of them on the North Shore. Certified with multiple ratings, Anderson offers introductory and advanced flying lessons. He also flies fire patrols for the Minnesota DNR.

But of all his aerial accomplishments, he is best known as the man who can always find a moose. And there’s nothing wrong with that. 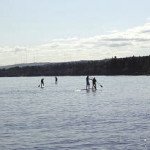