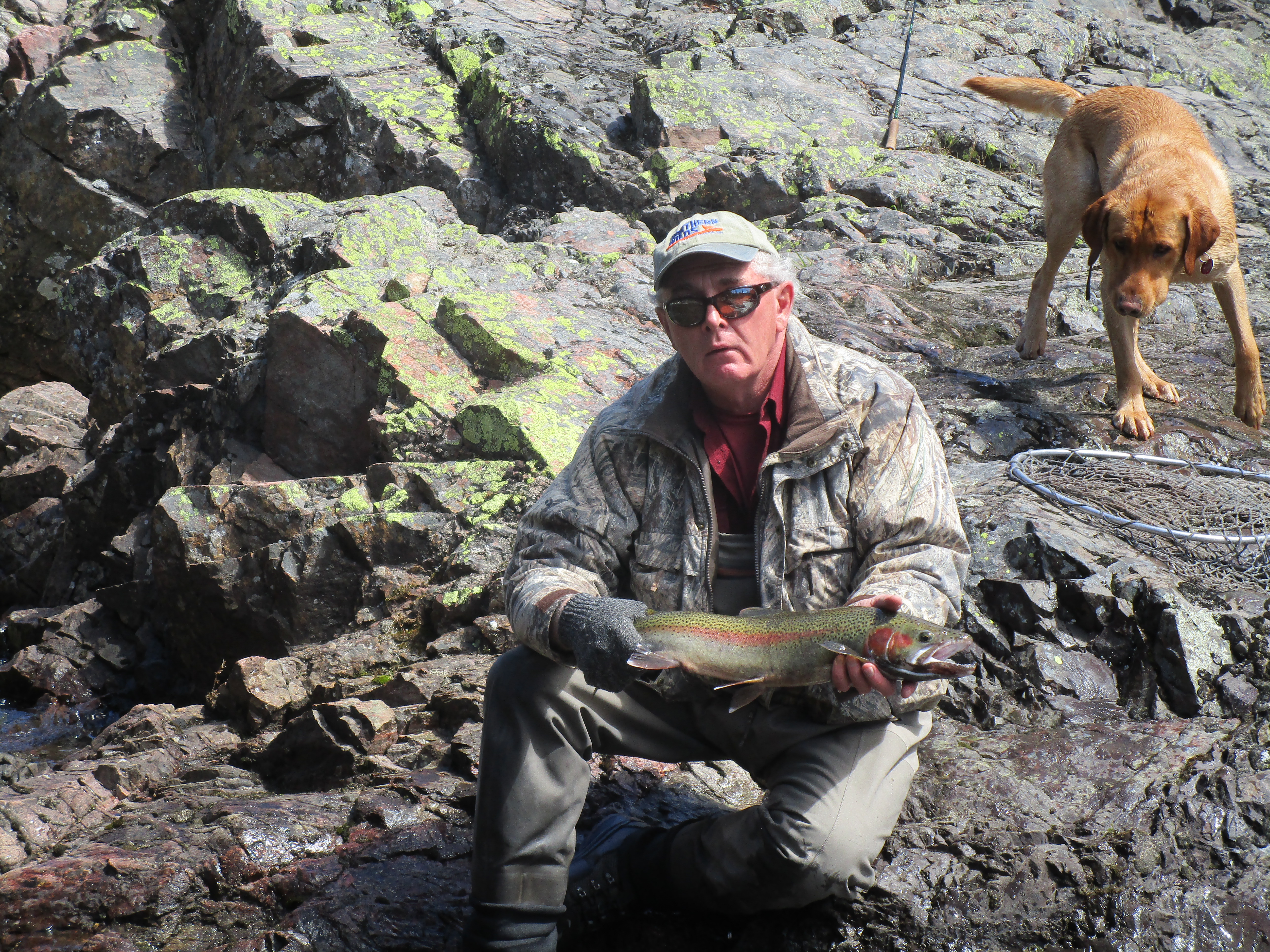 A testament to the wonderful place where we live is that no matter how often you go fishing, you can always find new waters to explore. It’s always exciting to do so, because you can never be sure of what you may find. Sometimes you discover a hotspot to add to your fishing repertoire. Other times all you find is a skunk.

Recently, a friend and I fished a trout stream that was new to us. We’d been meaning to check it out for more than a decade. Due to its distant location, this was our first opportunity to do so. We decided to make a day of it. Just getting to the river required a fairly long walk through rough country, but the best places to catch trout are never near the road. With fly rods in hand and a big yellow dog in the lead, we hit the trail.

A few steep hills, some great views of a mountain-like lake and a descent through a rocky canyon brought us to the river.  We could see a lovely waterfall through the trees. Possibly, this would be a good place to fish, but experience suggested a different strategy. Before wetting a line, we hiked downstream to Lake Superior. When you are fishing tributaries to the big lake for lake-run fish, it’s best to start at the lake and work your way upstream to the inevitable barrier waterfall. Otherwise, you may start fishing above the barrier and not catch the fish you are seeking.

My friend made a long trudge across a gravel spit to reach the river mouth, while I backtracked to find a suddenly missing camera (which turned up in a jacket pocket…). By the time I located the camera, he’d already caught a steelhead, thus earning a dollar from me for the first fish of the day. Hey, I have only my absentmindedness with the camera to blame for my loss. He soon landed a chunky brook trout in the outflow to Lake Superior, marking a fine start to our morning.

We made our way upstream, marveling at the clear water and multicolored stones that paved the river bottom. In a long, slow bend, small brook trout dimpled the surface as they fed on some unseen food source, while occasionally the still water was stirred with the swirl of a large steelhead. These fish, we discovered, were safe from us, because we couldn’t make a stealthy approach with the clear, quiet water.

Above the bend, the current quickened. This was more to our liking. Unfortunately, the big yellow dog, who is still learning the finer points of stealth, decided to swim through the middle of the pool. Although frustrating, this move was better than what he did the previous day; he swam across the rapids of a flood-swollen river and then became hung up amidst sweepers on the far bank. Twice the current pulled him under the sweepers. Surfacing the second time, he was pushed against the sweepers by the current as he struggled to stay afloat and pull himself out of the water. Finally, he clambered from the water. When he came to me, visibly shaken from the frightening experience, I sat down on the ground to pet and talk quietly to him until he calmed down.

We continued fishing upstream to the waterfalls, where we found a silver mother lode. The river, which wasn’t much larger than a creek, tumbled over a rock ledge in four channels, creating a series of cascades that was nearly 100 yards wide. Steelhead were lurking in the pools and pockets created by the falls. They were willing to bite. We had great fun for an hour or two “picking the pockets.” The big yellow dog “helped” land every steelhead. My friend even discovered a pocket that was teaming with small brook trout, leading us to wonder what sort of fishing we’d find for these Superior natives if we ventured above the falls.

But that would have to happen on another visit to this special place, when we were better equipped to fish for brook trout. On this morning, having covered the river’s steelhead water from mouth to falls, we were ready to reel up and head out. Instead of returning on the same trail, we decided, in the name of exploration, to try a different route. We headed downstream to the lakeshore and then began walking along the beach, looking for the alternative trail back to the truck. We happened upon three women who were hiking along the beach and were headed to view the waterfalls.

“Not very far,” one of the women replied.

We then proceeded to hike very far down the beach, trudging through soft sand and gravel. The sun was now high in the sky. We were wearing chest waders and heavy fishing jackets, which were not conducive to keeping cool. Every time I suggested we turn around, my friend would say the trail had to be “just ahead.” The big yellow dog was willing to go in any direction.

Finally, the beach came to an abrupt end at a rocky promontory. My friend climbed up on the rocks and called out that he had found “a sign.” I climbed up to have a look. The sign marked a campsite…along a different trail than the one we sought. At this point my friend pulled out his phone and looked at a map of the area he had previously saved. It clearly showed the trail was near the river mouth; “not very far” from where we met the three women. We turned around and trudged back down the beach.

The sign marking our trail was so easy to spot that we wondered how we missed it the first time. What was not so easy was the climb away from the beach. Up, up, up we went on a rocky path that at times was as steep as a ladder. Did I mention we were wearing chest waders and heavy fishing jackets? We met a small handful of hikers along the way. On a fine spring day, this trail was more popular for hiking than for fishing, although we did see a fellow fly-fishing from a float tube on a small, remote lake. Hot, hungry and thirsty, we eventually reached the truck, where we agreed that it had been a great morning. We worked up a sweat, explored new water and were rewarded with a few nice fish. That’s trout fishing at its best.