They say that indentured servants during the early days of New England used to complain that they were only given fresh lobster to eat. During summer, some Minnesotans can feel their historic pain. Just the other night, I said to myself, “What, fresh walleye again?”

Fortuitous fishing has uncomplicated my dinner menu. If there are filets in the fridge, I eat them. The rest of the menu is pretty much a given, too. Just before dinner I head out to the garden and gather a bowl of fresh greens and herbs. Just this week, I’ve added fresh chanterelle mushrooms to the list. Fresh beans, peas and broccoli are coming soon. Walleye filets will be augmented with fresh lake trout and salmon from Lake Superior.

It’s summertime; and the livin’ is easy. From now through at least freeze-up, I’ll pretty much feed myself. The menu will change as various fruits, vegetables, fish and game come into season. Even though I’ve been a “locavore,” since long before the term came into vogue, it’s still surprising just how big a change eating fresh is from the way we typically eat. In short, eating what is available requires a leap of faith.

In winter, when I go to the grocery store, I’m usually planning my meals for the next month. I stock up on staples like pasta, rice and canned goods. I purchase plenty of produce and frozen vegetables, as well as some meat to add variety to whatever game is my freezer. While I eat well in the winter, my diet is mostly what some folks call “comfort food.” Those of us who grew up on a diet of such food simply call it “home cooking.”

In summer, my grocery store visits are infrequent. Then a shopping trip is usually motivated by the need to stock up on household goods or food stables I can’t produce. But I walk right on by the produce, the meat and frozen vegetables. Those bases are covered. And that is the leap of faith; knowing that I can grab a bowl or basket, walk out to the garden or into the woods and return with dinner.

For most of our existence, this was how people ate. Hunter/gatherers did just that when they were hungry, taking what they needed from Nature’s bounty. Some researchers say this lifestyle afforded early people with more time for family, creativity and social interaction. The flip side to this idyllic lifestyle is sometimes Nature isn’t bountiful, which means you go hungry or perhaps don’t survive. This uncertainty likely played a role in humanity’s adoption of agriculture, which turned food into a commodity or trade good.

If you fast-forward through a few thousand years of human history, you arrive where we are today. Most of the world’s food is produced in industrial-scale farming operations far removed from the people who will consume it. The necessity of feeding millions has created an extraordinary system of commodity production and distribution that allows people living virtually anywhere in the United States convenient, affordable and year-round access to a global food supply. I think about this sometimes when, in January, I purchase fresh sweet peppers in Grand Marais that were grown in Israel.

Our society couldn’t be what it is without this food supply, but our good eats carry a significant social cost. Most Americans take grocery stores for granted. Many are unaware of where their food comes from or how it is produced. They simply expect to have what they want to eat when they want it, regardless if it comes from a grocery store or a restaurant.

In the past decade or so, there’s been an awakening of sorts as health-conscious Americans become aware that factory-farmed commodities and the food products processed from it may not be good for you or for the environment. This has led to the afore-mentioned rise of the locavore movement, where folks try to form their diet around fresh, locally produced foods. Some locavores are taking up hunting as a way to add healthy, natural protein to their diet. Many of them patronize farmers markets and CSAs (community-supported agriculture) to get fresh local produce, eggs and other farm goods.

Some of my friends who do so say they have neither the interest in nor time for gardening. That’s all well and good. Most likely they are eating better than they were previously. Perhaps they’ve made additional life changes to live a healthier lifestyle. But they still fall short of taking the leap of faith to producing food yourself.

I know people who keep chickens and raise their own beef. I know others who host elaborate wild game dinners for which they provide the main course ingredients. And I keep company with fishing bums, vegetable gardeners and deer hunters. All above the above produce their own food to varying degrees; some far more so than me.

You may say it takes special circumstances or a special person to make this happen. It’s impossible to garden in an apartment complex or raise beef cattle on a suburban lawn. Some folks don’t have a green thumb. Others have never had the opportunity to learn about gardening, hunting or fishing. It can be frustratingly difficult to do so on your own.

All that said, people who produce their own food aren’t special, but they’ve made choices in their lives that allow them to do so. When shopping for a house, a gardener evaluates the potential of a prospective backyard. The decision to raise your own beef begins with a decision to live in the country. Anglers and hunters make investments in the appropriate gear and then carve out time in their lives to use it.

In our modern world, you only make such choices because you want to do so. For many, the love of fishing or gardening is far more likely the driver of these to decisions than a desire to produce food. But once you begin eating what you’ve produced yourself, the satisfaction of knowing you don’t need to rely on the grocery store just whets your appetite. That’s why I’m having fresh walleyes for dinner tonight, again. 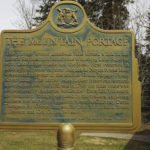 Standing on the Grounds of History