Too much fun has a way of catching up with you. On Monday morning, I rolled into the office a little late, because I rolled out of bed a little late. That’s what happens when you stay out on the water past your normal bedtime night after night. At this time of year, it’s worth being a little bleary eyed. The high days of summer are soon gone.

My fishing begins around sunset, when mayflies rise from the bottom as nymphs and emerge on the water’s surface as graceful winged insects. Some flutter skyward to mate. The less lucky ones disappear in a watery swirl, becoming a meal for a fish. If I’m lucky, a hungry fish mistakes the fly on the end of my line for the real thing. They do so often enough to keep me coming back night after night.

I don’t return to the same place each summer evening. Some nights I go for walleyes, while on others my quarry are brook or brown trout or perhaps whitefish. If there was a lake with crappies nearby, I’d go after them, too. Since the mayfly hatch lasts only a couple of weeks, I try to cram in as many different experiences as I can.

The other night, I walked into a pond that I hadn’t visited for a while. I brought the dog along, too. We started out on an old logging road that became increasingly overgrown the further we walked. It was obvious the pond doesn’t see a lot of anglers. Soon we were wading through waist-high ferns on a nearly indiscernible path. Every time the path turned, I looked back, trying to pick out a landmark that would be visible in the dark as I walked back out. Fortunately, I had a flashlight in my pocket.

Brook trout were occasionally rising across the pond when we got there, beyond my casting range. A gusty breeze that refused to lie down for the evening riffled the pond’s surface. Between gusts, the pond would settle down. Mayflies appeared.

The trout began rising sporadically. When one came up within casting range, I’d put my dry fly nearby in hopes of drawing a strike. At first the fish ignored my offering. I thought about trying a different fly, then decided to stick with the one I was using. Over the years, hundreds of fish have mistaken that pattern, of my own design, for the real thing. Although it seemed like forever, it wasn’t long before a brookie took a swipe at my fly. And I missed it.

When it comes to striking a dry fly, every fish species does it differently. Brown trout are slow and deliberate, so you slow your strike response by a few milliseconds. Strike too quickly and you’ll miss them every time. Walleyes mean business. When they take the fly all you need to do is tighten the line. Brookies often slash at the fly and are easy to miss on the strike.

It wasn’t surprising that I had a string of misses before I connected with a fat 10-incher. Then I missed a few more before landing a twin of the first one. My fishing settled into a rhythm. When the pond calmed between wind gusts, I’d make a few casts. After the sun set the brookies were rising all around me.

At first the dog waded into the shallows with me and tried to help land the fish. Then he went and sat on the bank where I’d left a rod case and spare fly rod. He was content to watch the action.

There was plenty of it. At the height of the hatch, nearly every cast resulted in a strike. Usually I missed it. I hooked a heavy trout that burrowed into the weeds on the bottom and got away. This led me to play the fish hard, with the unintended consequence of losing what were likely bigger fish. In the past, I’ve caught brook trout as long as my forearm here.

This night, my best one was 12 or 13 inches. I never bother to measure trout that I intend to release. It was the last one I hooked, striking at the sound of the rise because I could no longer see my fly. I made a few more casts, but the rise was over. In all, I caught and released 5 brook trout, all 10 inches or better and lost at least that many. My total fishing time was a little more than an hour.

Twilight lingered on the pond as I waded to shore and put my rod into the case. Stepping into the woods, I was happy to have the flashlight and the dog. I couldn’t see the trail, but the flashlight beam kept me from stumbling over logs. For navigation, I followed the dog. Staying on the trail was no problem for him.

Usually, the walk out seems shorter than the walk in. On this night it was the other way around. With the flashlight trained at the ground, I just kept going. I couldn’t help but think what the walk would be like without the flashlight and the dog for a guide. Soon enough we reached the truck.

Tonight other plans will keep me off the water, but I’m already eyeing the weather forecast for the rest of the week. Tomorrow is supposed to be hot and sunny, which hopefully will lead into a warm summer night. That’s when the best hatches happen. Maybe I’ll return to the pond, just to make sure I get back there again while the fishing is good. I’ll bring the dog, too.

Soon, our northern summer will slide into the dog days and the hatch will be over. Hopefully, I’ll have spent enough evenings out there that I’ll be ready for a change in my fishing. I’m not sure I ever get enough of rising trout on long summer evenings. Our northern summers pass quickly. You have to enjoy every moment of them that you can.

As go the monarch butterflies, so do we? 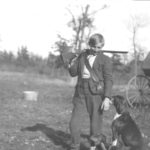