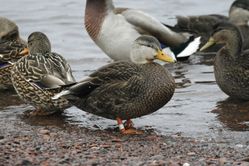 The American black duck (forefront) is often seen mixed in with flocks of closely related mallards. Hybridization between the two species occurs, resulting in ducks of combined lineage. —Photo by Michael Furtman.

In the winter in Duluth, I am often asked, “What are all those ducks in the harbor?” The answer, for the most part, is “mallards,” but they’re usually joined by at least a few of a more interesting species: the American black duck.

Black ducks have dark brown bodies, with lighter face and neck feathers. Their deep violet speculum (the patch on the wing that can be seen most easily on resting or swimming ducks) has a hard-to-detect black border. The male’s bill is yellow; the female’s is dull green. In flight, the wing linings are much lighter than the body—the contrast is much greater than in female mallards, which have a similar pattern to males. Male black ducks have reddish-orange legs; females have yellowish-orange legs.

Black ducks nest in a variety of ways: in tree cavities, on old bird nests, on muskrat nests, on the ground, and will nest as far as a half-mile from water. They seem to prefer wooded areas more than other ducks do, but they are so flexible in their habits that it’s hard to generalize. They eat mainly grasses, rushes, and seeds, but will also eat fish, mussels, and other invertebrates.

Mallards and American black ducks are closely related, and they hybridize frequently. Black ducks are generally found in the northeastern quarter of North America, but in many areas are being replaced by mallards, which are found throughout North America. It is quite common to see a few hybrids in any group of either species. For example, you might see a male with the dark plumage of a black duck, but a bright splash of green on the head, like a typical mallard. Black Ducks can turn up far from their home range; they are rare in Europe, but they do occur there.

Both mallards and black ducks are dabblers—ducks that tip forward, tails in the air, to feed, rather than diving. Dabblers can also take off by springing into flight without a running start. This makes them well-suited to small bodies of water, which also gives them the name “puddle ducks.” Along Lake Superior’s North Shore, they can turn up anywhere, but there seem always to be groups in the Grand Marais and Duluth harbors. In the winter in Duluth, the group can number in the hundreds. 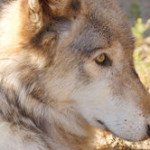