Sometimes you hear about a place and it sticks with you. I’m not sure where I first heard of the Elk River, but I’ve long wanted to fish this trout stream in the Canadian Rockies, one of the few that still supports native populations of westslope cutthroat trout and bull trout. In a lifetime of chasing trout, I’d never caught either of these western fish. It was time to do so.

The Elk originates in the backcountry of Banff National Park and flows south through a deep mountain valley to meet the Kootenay River not far from the U.S. border. Our destination was Fernie, British Columbia, a funky little town that attracts ski bums and trout bums, in season. We got there by way of Montana, where bull trout are on the Endangered Species List and westslope cutthroats have long since been crowded out by introduced populations of nonnative rainbow, brown and brook trout. Ironically, the Elk’s pristine fishery is just north of the border.

Unfortunately, we couldn’t find a campsite in Fernie, so we continued about 20 miles up the Elk River Valley to Sparwood, a coal mining town that was decidedly less funky, but had a good public campground. The next morning we awoke to mountain weather. A week of heat and sunshine abruptly changed to cold and rain. I decided to start the morning on Michel Creek, a nearby tributary recommended both by friends and the fly shop where I purchased my license. While its fishery was pristine, Michel Creek’s surroundings were not. Flowing beside a busy highway, the creek was n the midst of a coal mining area. But the creek was clean and clear and it was easy to forget about the highway and the mines as you walked along the stream. 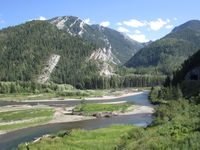 The change in weather put a chill on the fishing. I couldn’t find a fish in Michel or the Elk. Finally, in midafternoon, the air temperature warmed by a couple of degrees, triggering a hatch of small, Pale Morning Dun mayflies. Back at Michel, the first trout to rise for my fly turned out to be a cutthroat nearly 17 inches long. Catching that fish was worth the wait.

I found a pool where the trout were rising and brought Vikki there to catch one. Soon she landed her first cutthroat, a 15-incher. For the rest of the afternoon dry fly fishing was easy and I landed about a dozen cuts running 12 to 16 inches. Late in the day, as I tussled with a 16-incher, two bull trout came out from beneath a log jam to chase the struggling fish. Shortly afterward, I caught a cut that looked like it had been grabbed by a much larger fish.

Monsters lurked in the creek. Bull trout, sometimes called Dolly Vardens, are actually char related to lake trout and brook trout. Living in western streams and lakes, they grow to large sizes. Bulls in the Elk system may top 10 pounds. They are usually caught using big, weighted streamer flies, though they become more difficult to catch when they are about to spawn in the early fall. I spent a little time fishing for bulls, but never had a strike.

The weather was no better the second day and the fishing followed the same pattern with the fish becoming active in the afternoon. Out exploring, we wound up on a forest road that climbed the mountainside above the Elk. Although the river valley is traversed by a highway and buzzes with human activity, you don’ t have to go very far to reach the edge of the wilderness. All of the native wildlife of the northern Rockies is found in abundance here, including elk, bighorn sheep, moose, mountain lions and grizzly bears.

We’d bought a can of bear spray, but I didn’t carry it until our third and final day when we drove up the Elk beyond the tiny town of Elkford, which bills itself as the Wilderness Capital of British Columbia. Along the way we passed small ranches where homes and outbuildings were surrounded with high woven wire and electrified fencing—clearly intended to keep something out of the fenced enclosure rather than inside of it. Walking along the river, I discovered sizeable bear tracks and decided to stay out of the thick willow brush along the banks. We never saw a bear. Rather than being apprehensive about a chance encounter, I enjoyed being in country where grizzlies roam.

I also liked the upper Elk, which reminded me of a favorite Lake Superior stream. Again, there was little fish activity, but working upstream with a dry fly I found a few cutthroats. The weather improved and it felt good to be fishing in sunshine beneath snow-capped peaks. I wished we could stay longer, but it was time to start heading home. Someday, I may go back for the bull trout that eluded me. And I’ll daydream about it until I do so.

Points North: In Montana, A Fishing Reunion With An Old Friend