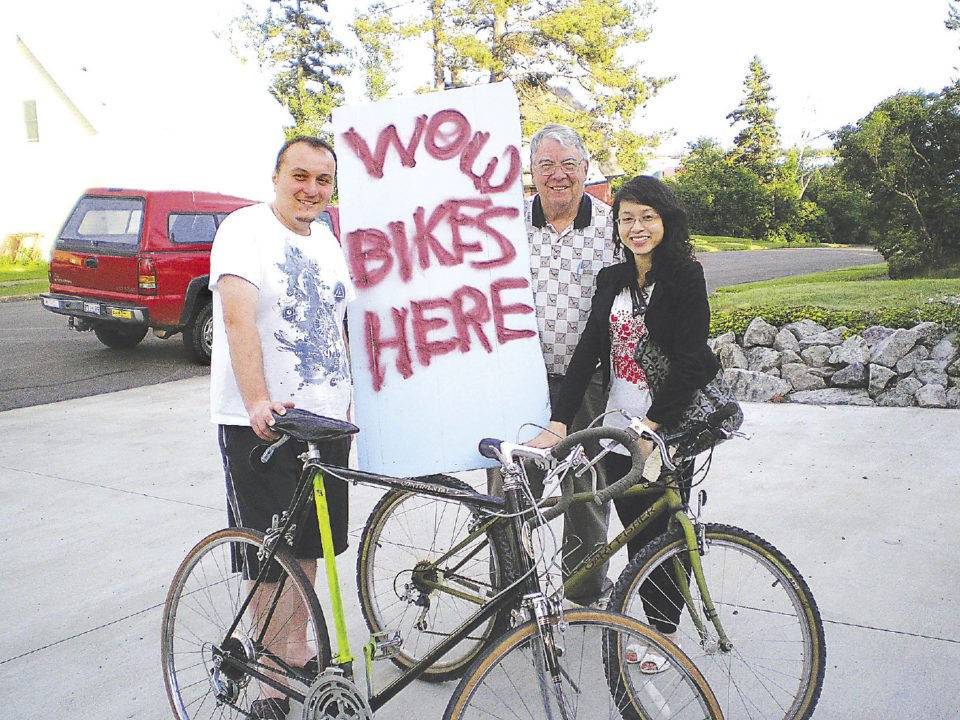 The Workers on Wheels (WOW) project provides bicycles for use by international workers in our community. Taking advantage of the program in 2010 is Ercument Guney from Turkey and Hong Bui from Viet Nam. They were delighted to pick up their loaner bikes from WOW representative Dan Strayer. | WOW

Grand Marais—For some, hopping on a bike is a pleasant way to spend an afternoon. Some cyclists seek hills and thrills for adventure and a good work out. But for the international workers who visit the North Shore that need a way to get around, bikes are a blessing.

That’s what a small group of community members realized back in 2010 when they developed the Workers on Wheels, or WOW program.

One of the program founders, Dan Strayer, said the idea was born in an “over the pew” discussion with Rick Schubert at the First Congregational Church-United Church of Christ. The two men had heard about a California library checking out bikes along with books. They wondered if this might be something the community could do for international workers who needed convenient transportation.

Noting that there were likely many unused bikes in garages and backyards in the community, the men pitched the idea to others. Surprisingly, Strayer said there were few skeptics. He said it was difficult to find volunteers at first, and money for bikes and bike parts was a challenge, but the group never encountered anyone that said it couldn’t be done.

They forged ahead and launched the WOW program with five bikes. Word spread and more bikes were donated; more volunteers came on board and businesses that employ international workers saw the value for their workers and lent support.

Bikes have been donated from near and far. Sally Dunn is a member of First Congregational Church and also of Mayflower Community UCC in Minneapolis, which has donated bikes that Dunn has driven up the shore to help the international workers.

Workers on Wheels currently stores 100 donated bikes in the UCC Church basement each winter, waiting for international workers to return.

Over the winter, each bike is checked out and readied for the next year. Strayer says that reconditioning program continues throughout the summer. Any international worker who has a non-functioning bike is provided a different bike, or the problem is corrected, and the bike returned to them.

Strayer says there have been many who have helped through the almost 10 years of the program, but it is a core group of volunteers who currently keep the bikes rolling—Mike Carlson, Steve Deschene, Jerry Hininker, Jeff Kern, Jerry Lilja, John Mattice, Rick Schubert, Dave Steckelberg, and Strayer.

Strayer says many of the workers are multi-talented and can change tires, custom fit riders to bikes, can adjust brakes and gears, and so on. They are assisted by Fireweed Bike Co-op owner Jay Arrowsmith DeCoux, who also volunteers with the program.

Volunteers also help out with the lending process, which could be complicated as these college-aged workers come from Russia, Turkey, Rumania, Jamaica, Montenegro and other Eastern European countries.

Asked if there is ever a language barrier, Strayer said no. He said sometimes there is a bit of a struggle until local volunteers get used to foreign accents. But overall, he said the international workers are able to communicate quite well.

“Two major reasons the workers come to Cook County are to earn better job wages and to improve their English,” he explained.

To rent a bike, international workers pay a $40 deposit, which is returned to them when they return the bike at the end of the summer. However, more often than not, the workers don’t take all of their deposit back, choosing to support the program with a donation.

In other cases, the businesses who employ the international workers pay the deposit and leave all or part of it with the program to help defray expenses. All of that money and other donations from the community are used exclusively for the program. Volunteers are not paid.

Strayer says the program is successful because of the support of the First Congregational Church/UCC and the entire community.

He hopes to see the program continuing, summing up the thoughts of the WOW team, “Keep the donated bikes and financial support coming. Incidentally, anyone wanting to learn and practice ecumenical bike repair, observe an international smile and become a part of this project is encouraged to join us,” he said. 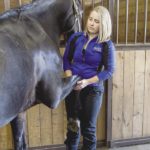 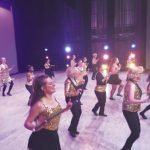 Experiencing the Joy of Dance