As I sit down to write this column, I’ve been looking back on this past year, and mulling over the things I learned. You should never stop learning. And boy oh boy, 2016 was full of lessons.

Time Waits for No One

I turned 54 this year. It feels funny to write that number down, because on paper, it looks pretty…old. When I was leaving the nest in my early 20s, my parents were in their late 40s. My Dad retired at 56. So I have a good gauge of where I’m at in life’s curve. I’m no spring chicken anymore. My two boys are men. What’s left of my hair is greying. And I have discovered the nap. This has been a long time coming. For many years, I never napped. Even if I did a week of early morning shifts at CBC radio, in Thunder Bay, I would not rest. In the recent past, when I was out fishing, or on a boat, I’d have little siestas. But those weren’t really naps. I never really allowed myself to sleep during daytime hours unless I was sick. That all ended in 2016. If there is a moment to rest now, I take it. And I can fall asleep in seconds. No more struggling. The moment I get horizontal the power is shut off. It’s been an interesting change to my cycle, but one I’ve fully embraced. To be clear, it’s not every day, or even every week. But if I’m tired…

The World is Warming

This summer, from the end of June until September, was one of the hottest I can ever remember. Perhaps it was more apparent to me because I was out in a boat through much of it. Sunscreen and UV-resistant clothing were a must. The unseasonably warm weather in northwest Ontario stretched well into the fall. As I write this, in early November, we have had double digit, record breaking, daytime highs and the blackflies are out. The ground is soft and grass is green. Twenty years ago, I’d have been prepping for ice fishing as the lakes would have been freezing over. This year, the lakes have warmed through November. During the summer, ice cold Lake Nipigon was as warm as it has been in my lifetime. Instead of temperatures in the low to mid 50s F., they were ten to 15 degrees higher. As a father, trout angler and lover of our natural world, the rising world temperature concerns me. It should concern all of us.

Like so many of us who grew up in the northwest, I grew up seeing moose. They were a regular and enjoyable part of our outdoor experience. We would see them on canoe trips, when steelheading down the North Shore in the spring, and even while driving roads on the outskirts of the city. Moose were part of the scenery in the northwest. In 2016, I saw more moose than I’ve seen in many years, but that was still only a half dozen times. Most of the sightings were fleeting, often on the shore of a lake. The old saying about not realizing what you’ve got until it’s gone really rings true when you talk about moose. This year was the first in more than 20 years that I didn’t hunt these great animals. There was no adult tag to hunt on, and I can’t get excited about hunting a calf. There are some signs that pockets of moose may be coming back, particularly around Thunder Bay, but any mass return of these majestic animals will be a long time coming. In the meantime, I keep watching the road sides, hoping for a glimpse of these great beasts.

There were many other teachable moments in 2016, and I expect there are still more to come. That seems to be how this life works.

Points North: In Ontario, the government has a watchdog 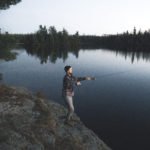