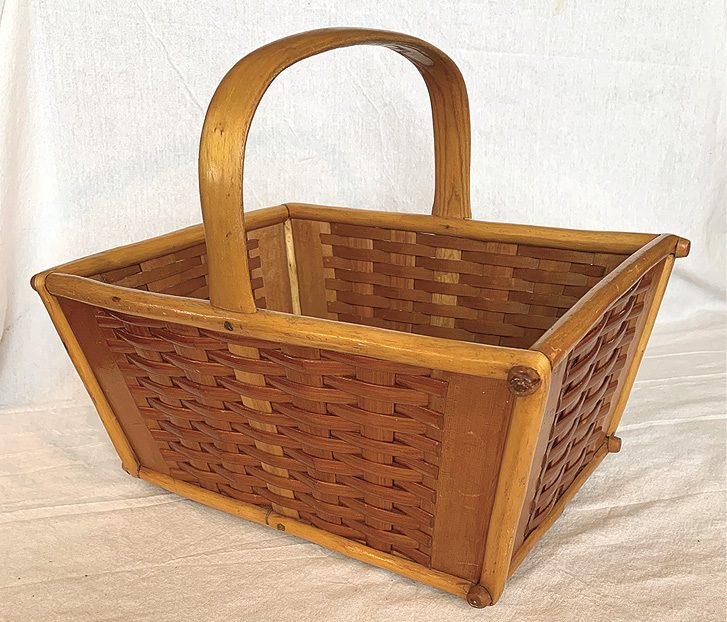 This example of a knutkorg (Swedish) or knot basket was made at the St. Louis County Cook Home (poor farm) in the 1940s and sold at the Gunflint Lodge Trading Post by the Kerfoot family. | SUBMITTED

It’s a couple weeks before Memorial Day, the early 1940s, and the tourist season on the North Shore would soon be in full swing. Spring had come early to Duluth. Trees were leafing out and Lily-of-the-valley were blooming. In a carpentry shop on the hillside, five men sit working thin slats of cedar through the sides of baskets of various sizes. The smallest would make a nice lunchbox, and the largest could hold enough yarn for a winter of knitting. The men call the baskets ‘knutkorgar,’ in their native Swedish.

The baskets have rigid frames made of willow, sides of riven white cedar, and ash handles that arch gracefully from the rims. Looking closer, you can see that each willow frame consists of four thin shoots that are notched and shaped to interlock with one another. The ingenuity reminds one of folding the hinged tops of a cardboard box together until each one is over the one to its left and four floppy flaps become a stable surface. At least two dozen completed baskets are stacked neatly nearby. The fresh wood is still bright; the mellowed patina would come later. The place where the men are gathered is known as the poor farm, or Cook Home.

In the late 1800s, each county in Minnesota was mandated to provide a place to house its indigent population. Before Social Security, the poor farm was the only safety net for someone who couldn’t support themselves and had no one to take them in. In St. Louis County, the Cook Home was at Rice Lake Road and W. Arrowhead Road (where the public safety complex is now located). When the men assemble outside for coffee, they have a view of the Pauper’s Cemetery a few hundred yards away.

While the basket makers take their coffee break, a father and his young son are driving to Duluth. They left Gunflint Lodge, the family resort on the Gunflint Trail, just after sunrise this morning. Bill Kerfoot had finished building the log ‘Trading Post.’ Now he needed to stock it with items that would appeal to the tourists. His son, Bruce, would be meeting the makers and suppliers, and one day, it would be Bruce’s job to source and gather these treasures. The Kerfoots stop at Father Baragas Cross to stretch their legs and enjoy the cake and thermos of coffee Justine sent with them.

The basket makers get back to their task. Their light banter belies their bleak circumstances. Known as ‘inmates,’ living at the poor farm is a humiliation to the strong work ethic and devotion to self-sufficiency they’d all been raised to esteem. Born in the late 1800s in the Swedish speaking region of western Finland, they’d worked all day, every day from 6 or 7 years old. Their families had foreseen that conscription into the Russian military was inevitable. For their sons, that would mean five years on a war front, or in Siberia. The families had scraped together the funds and sent their sons to find a better life in Minnesota. Young and strong, the men had found plenty of work in the forests, mines and fishing boats, never imagining a time when they’d be living under the shame of dependency and poverty. Injuries and age changed all that. So here they are, a handful of the over 500 residents. Several times a month a bell is rung while the staff carries someone to his spot in the cemetery.

In mid-afternoon, little Bruce and his dad arrive at the poor farm. Bill greets the old Finnish men by name and they catch up on news from the North Shore and Gunflint Trail. Bruce takes in the scent of wood shavings and the knives, planes and spokeshaves laying nearby. One of the men call him over to watch as he pulls a thin strip of cedar from a bucket of hot water and pushes it through the slats on the bottom of a basket. Trimming the ends with his knife, he hands the finished basket to Bruce. With a, “See you next year!” the Kerfoots leave with a couple dozen knot baskets. Most will be sold to tourists; some will become lampshades or bread baskets in the dining room.

Author’s note: The unique knutkorg/knot basket was plentiful in Sweden and western Finland in the 1800s. The Finnish laborers brought the knowledge with them, putting it to use when their ability to provide for themselves was lost. Bruce Kerfoot remembers going to the poor farm every spring for baskets. On his last trip, Bruce drove alone. Just one maker remained and only a handful of baskets were to be had. With that, an era came to an end. The willow/cedar/ash ‘knutkorgar’ can still be found in antique shops and private collections. Many were bought by tourists and early residents of the Gunflint Trail. After 70 years or more, their well-proportioned sturdiness is the best testament to the skill and artistry of the immigrant makers. 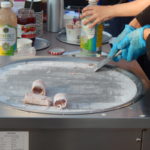 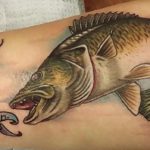