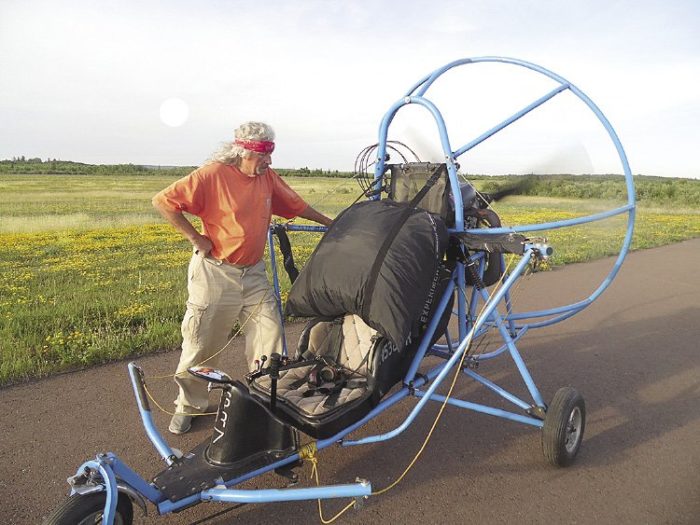 Denny Pechacek stands next to his ultralight at the Cook County Airport in Grand Marais. | AMY NEILSON

HOVLAND—Denny Pechacek of Hovland has always wanted to fly like a bird. He became a certified paraglider 22 years ago in the Czech Republic. He has also gone paragliding in the American West. Unfortunately, the heavily forested North Shore landscape doesn’t lend itself to paragliding, so he needed to find another way to take to the sky.

Four years ago, he ventured into motor-powered paragliding, purchasing a backpack unit with a motor and a propeller.

“You strap it on your back, take a few steps, give it the gas and you are up,” he said.

Taking to the sky was easy and fun. However, he had a couple of tough landings, which were made more difficult by his bad hip. So, he looked for another way to go skyward.

On a fishing trip to Montana, he met a couple of brothers who were into ultralight flying. They introduced him to motorized trike ultralights. The three-wheeled paragliding contraptions have a seat in front of the motor and prop.

“It’s like a flying couch versus a mosquito,” he said, comparing it to a backpack. “Very safe and very comfortable.”

He tried to buy an ultralight from the Montana men, but they weren’t interested in selling. So, he took to the internet, eventually purchasing a two-seat “trike” with a 50-horse engine built by Six Chuter International. He now flies it on calm days at the Grand Marais Airport, one of the few open places he’s found to take off and, more importantly, land in Cook County. He’s flown the ultralight about a dozen times.

Pechacek talks enthusiastically about his time in the sky. Most often he flies over the forests around the airport. Once this summer, he made his way to Pincushion Mountain and then flew down to Grand Marais, where he made a turn over the harbor and then climbed back up to Pincushion and eventually the airport.

In the U.S., you don’t need a pilot’s license or special certification to fly an ultralight. The craft, however, must go through an annual inspection with a certified aircraft mechanic. Manufacturers often recommend pilot training or require it prior to sale.

Calm skies are needed to fly the trike. Pechacek said that with winds greater than 8 mph it’s difficult to make forward progress. What he finds frustrating is that wind conditions are often calm at his home perched on a hill above Lake Superior while it may be breezy further inland at the airport. It’s hard for him to find good times to fly.

Next year, Pechacek hopes to take his backpack paraglider along on an epic adventure. He is working to restore a steel-hulled boat with a cabin that he plans to take down the Mississippi River to New Orleans. From there he plans to head into the Gulf of Mexico, following the Gold Coast to Florida and eventually concluding the journey in the Florida Keys. Along the way, he hopes to have some airtime over lonely, wild beaches. For a man who likes to fly like a bird, it’s a flight that fires his imagination. 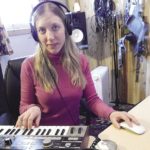 Zoe Gordon: The practice of listening 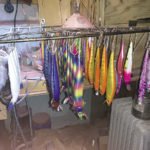