Our run after five inches of rain involved a lot of water. | ERIN ALTEMUS

About the time we were supposed to be getting our first good snow, a month or more of rain came all at once on November 11. Rain gauges across Cook County reported tallies in the 3-6-inch range. At our place, the rain blew sideways for the entire day, exposing weaknesses we didn’t know we had in our house, toppling our hoophouse and saturating every nook and cranny of the dog yard. I’ve never enjoyed training dogs in the rain, so I took a day off training to accomplish some tasks inside.

The next day, I hooked up the A team, threw the chainsaw in the back of the ATV and braced myself for an adventure.

After a very dry summer and fall, I became used to dry trails. We cross two small creeks on our training runs where I stop and let the dogs have a drink. On this day, the trail was one long creek. Places I never thought would hold water were submerged. Lead dogs Pinto and Itsy plunged ahead through every puddle with glee. But within a half mile, we found ourselves up against a wall of pine needles with no way around.

I pulled out the chainsaw and as it revved to life the lead dogs turned around and started backing away. After checking to make sure the whole team wasn’t going to end up in a big ball, I started cutting at the pine over the trail, a large mess of branches and thick trunk that took the better part of 15 minutes to clear. Meanwhile, the dogs barked and howled, impatient to go. Stevie chewed through her neck line and then her neighbor’s. Peaches broke her harness. With the tree off the trail, I straightened out the team, untangled dogs, finagled a harness fix and off we went. Luckily it was the only tree I had to contend with.

On the next part of the run, I found the road to be washed out. Large amounts of rushing water had carved gullies throughout the road bed. The dogs navigated the trenches easily and I followed on the ATV, carefully crossing each furrow with a bump, hoping I wouldn’t get stuck. Then came the water. We had crossed several large puddles already, but in two places, there was standing water, 100 feet long. The lead dogs didn’t hesitate, pulling the team through. One spot had become a rushing creek, the water reaching up towards the dogs’ bellies. They charged through, getting a cool down and a drink simultaneously. In order to get enough miles, we have to go out and back and we did this twice, going through the watering holes four times.

By the end of this 20-mile run, the dogs were thoroughly soaked. I took the harnesses inside to wash and dry. Temperatures were falling and I checked the weather. Turns out the entire rest of the state was about to be hit by an Alberta clipper, but on a map of the state shaded pink and purple for the different storm warnings, there was nothing over Cook County. By the end of the weekend, we would be the only county with no snow on the ground.

I’m sure I must go through this every November: Long cold rides on the ATV that should be longer because the Beargrease is looming and somehow there is just never enough time in the day to train as much as I would like to train. Rocks freeze and somehow get harder and sharper, if that is possible for a rock, and this takes a toll on the dogs’ feet. There is that lack of sunlight thing and the waiting game for snow. Yes, if I could skip November and move right on to December, I most likely would.

For now, we keep plugging away at the wood stash and trying to complete other projects that the inevitable snow will keep us from doing. Most days there is little time to spare and most days I like my life just that way. 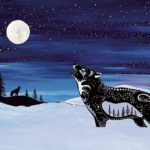 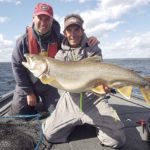