Having fished streams and rivers all across Ontario, I can say one thing for sure: if conditions are right, steelhead aren’t that tough to catch. They’re just fish, not magical beings. But you need to know how and when to use the right tools for the job.

Two basic techniques will catch river-run spring steelhead anywhere, at any time: drift and float fishing. Pick either of these techniques and you will be able to catch a steelhead. Master both techniques and fish will fear you. 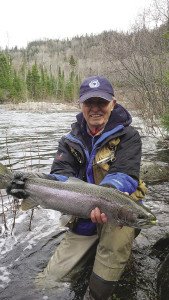 This technique is really the root of steelhead fishing.

Most steelhead in streams and rivers are on or near the bottom. The technique of drift fishing simply allows a bait or fly to be bounced as naturally along the bottom as possible. The hope is any steelhead in the vicinity will decide your bait might be worth a taste, even if eating isn’t at the top of their minds. Drifting is, however, the technique anglers have the most difficulty with initially, as snags are common. If you are not getting snagged when you drift, you’re probably doing something wrong. The simplest way to drift fish is with a small group of split shot about a foot up the line, coupled with a single No. 6 Octopus hook.

You can then use whatever bait you choose, a roe bag being the traditional choice. You need to use enough weight to bounce bottom, but not so much you are constantly snagged. The good thing about this simple setup is it doesn’t take much rigging. The bad thing is when you are firmly snagged, you’ll break off everything.

A better alternative is to use a dropper rig that will allow the weights to pull off. To create a dropper rig, you need a small barrel swivel. These have a small eye on either end. Tie your main line to one end, and your leader and hook to the other. Then tie a short leader of line to the swivel at the main line end. This is your dropper. On the dropper you can clip or squeeze any number of weights, from very light to heavy. Egg sinkers work extremely well for droppers, as do split shot with no wings. The weights need to be snug enough on the line to stay put except under high stress.

The trick to drift fishing is to keep the rig moving along the bottom as naturally as you can. Cast your rig upstream into the current, and then feel for the bottom.

This will take some practice. If you tighten up too late on the line you tend to get snagged. A long rod of at least 8 feet helps control your line. Keep the tip pointed up at about three o’clock and follow the path of the sinkers with your rod moving. You should be able to feel the sinkers as they drag downstream. Keep your line tight by reeling in excess slack. If you feel the rig stop, or any resistance at all, set the hook.

When I started steelheading 40 years ago, tradition dictated you drifted bottom to catch steelhead. Today, it’s far less common to see a classic drift fisherman on the streams. Many people are suspending a fly or bait below a float.

I recommend float fishing to all new steelhead anglers. A properly rigged float keeps your bait off the bottom, but in the face of the fish.

To fish a float, use a graphite spinning rod of about 9 to 10 feet, as it improves line control. You can go longer, but rods over 10 feet create other headaches. It can be tricky to float fish properly with a spinning reel, but many of us have done it for years. However, if you get into float fishing in a serious way, it’s hard to beat a centre pin reel. They look somewhat like an over-sized fly fishing reel, but centre pin reels are larger and have an amazing ability to release line smoothly and evenly.

Here’s how to rig a float: Attach your float to the line. Below the float, tie a barrel swivel on the main line. Then attach 18 inches of leader material to the swivel. Tie the hook onto this leader.

Perhaps the most crucial element of float rigging is getting the split shot placement right. Usually, a couple larger shot near the float and three or four smaller shot down near the hook will do. In fast water, bunch the lower shot up so the line swings down to the bottom faster. In slow water, separate the shot evenly. If the top of the float is tilted downstream, you are dragging bottom.

Experienced steelhead anglers can teach you a lot. Watch how they fish a float, then imitate their on-the-water moves. Many of them will even help a greenhorn angler out, especially if there is a cup of hot coffee or a granola bar involved. 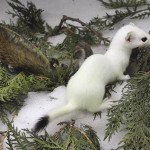 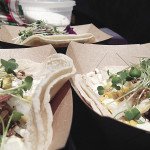