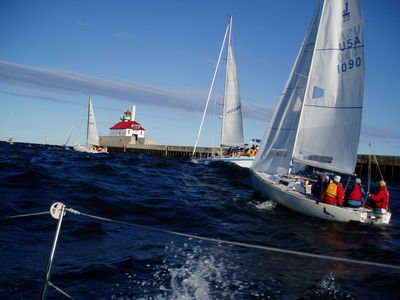 “What?” I ask, before a frigid wall of Lake Superior smacks me. I snort water out of my nostrils. My rain jacket is now a soaking joke. And we haven’t even started racing.

For years, I looked at the big lake on Wednesday nights in Duluth and saw the weekly regatta put on by the Duluth Yacht Club (duluthyachtclub.com). My family and I sat on the deck at Baja Billy’s so the kids could look at the tranquil blue-filled-with-white triangles of sail. I imagined the sailors with their topsiders and ascots chortling about the stock market while they passed around the chardonnay.

I discovered that my friend Luke was a crew member on one of the racing boats. Last September, before the last race of the season, I asked my buddy if I could tag along. He told me to bring every piece of rain gear and winter gear I owned.

“Can I bring Sam?” I asked, thinking of the placid evening I’d have out on the water with my 6-year old son.

Slowly, with a smirk, Luke said, “Maybe you should try it yourself once.”

I agreed, not processing that the 20-knot winds out of the northeast were fetching up eight-foot swells on the lake.

At the skipper’s meeting in the marina at Park Point, everybody made sure rookies like me had a ride. I was invited onto the Weatherly with Captain Tom. I’m a landlubber but figured I’d be okay as long as I didn’t spill any caviar. I should’ve expected rougher seas as I watched Captain Tom counting heads. We followed the other boats through the calm waters toward the Aerial Lift Bridge. Or as I now call it, the Portal of Doom. One of the guys said it was good to have more crewmen than normal since we could use the “rail meat” in the strong wind.

We spat out past the lighthouse and the skipper hollered some commands for us to start raising the sails. Luke looked me in the eye and yelled, “Winch!”

“Winch!” and held out his hand. I stared back. I’m pretty sure he wants me to give him something, I thought. Another crewman reached under where I was sitting and grabbed a winch handle so Luke could help tighten down the lines that adjusted the sails. A winch. I knew that.

As we jockeyed for position prior to the start, Luke laughed and pointed at a boat near us. I laughed, unseeing and clueless. (Someone on another vessel was puking up lunch.) Luke pointed at another boat. I nodded knowingly. Again, I was too obsessed with holding on to see that one of their deckhands was overboard. A couple of “Big waves!” later, Luke asked me if I was okay. “Fine! Yeah! Awesome!” I answered with a forced grin that looked like I had gas pain.

Suddenly, we were off and racing. We headed across the start line and up along the north shore. I gave up on taking pictures as I needed both hands to keep from going swimming. Each time we got ready to tack, Captain Tom would ask, “Everybody ready?” I’d whimper, “No” to myself. He’d say, “Here…we…GOOOOOO!” He whipped the helm to lee, the mainsail boom flew across over my head as I crawled over the cabin through the ropes and cleats, banged my shins, and threw my legs over the opposite rail while the boat leaned the other direction. My true calling at last: self-adjusting ballast.

At one point, as we pounded through the waves, there was a horrendous crack from the inside the hull. When the skipper perked up, I worried. Someone joked, “I hope that’s not the keel.” Someone else answered, “If it was, you’d know.” He pantomimed us capsizing with his hands. I looked over to shore, because my wife had our kids at Baja Billy’s. Great. My kids will watch Papa go down with the ship while they’re eating fajitas.

Finished and at the marina, I celebrated my survival under a wonderful sunset. My left kneecap was my only dry body part. Sailing was a boxing match, not a game of croquet. But, you know what? It. Was. Awesome. I highly recommend hitching a ride at the skipper’s meeting. Depending on the wind, Rail Meat is the new extreme sport. 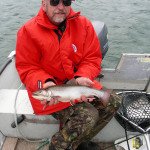 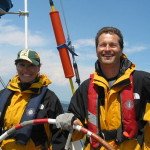 Excursions on the Bay