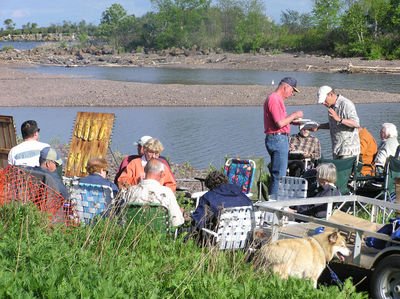 Today when you mention planked trout or salmon, many people think of the thin, cedar planks that you can buy at many sporting goods outlets to cook fish over the grill on. But what we are talking about for this story involves something quite different, can feed larger crowds and is just as delicious.

A Duluth based fishing group, the Lake Superior Steelhead Association, has been having an annual Planking Party for its current members for over 30 years, with about 50 to 60 guests attending each year. The Master Planker for the organization, John Whaley, has agreed to share some of his expertise in planking fish gained through 20+ years of cooking over open fires.

One reason that the fish is so tasty when planked is that it is slow cooked using an open fire and spiced just right and finally basted with butter. The boards are about 34 inches by 48 inches in size. The LSSA uses boards made of black ash, a local, dense grained hardwood. Six or eight individual boards are fastened together by bracing on the back. With modern equipment, biscuit joinery could also be used, but I would still recommend back bracing. The outside edges of the long dimension have dowels drilled in and secured every two inches. These dowels allow the fish filets to be secured to the boards by lashing them with butcher’s string in a crisscross pattern, with at least five passes of string per fish filet. Whaley recommends that the boards be completely dry when setting the filets. The fish skin to dry board will help alleviate slippage of any filets along with the string.

The best filet for this method is to take the sides and ribcages off the fish but leave the skin on. It’s best to try and arrange similar size filets to a board which allows for more even cooking. Do not overcrowd the filets, maybe eight to ten filets per board, depending on the size of fish. The LSSA guys apply lemon pepper and dill weed liberally right before lashing the fish to the boards, with at least five passes of string to each filet. Then off to the fire.

A very pivotal part involves the fire itself. Whaley always starts with an eight foot log and builds the fire on either side of the log, depending on how many boards are to be used. The reason for the log is that this reflects the heat outward to the boards of fish propped up on end. According to Whaley, sugar maple is by far the best wood but any hardwood would be preferred over pine or popple because of their ability to hold coals longer. The initial lighting should subside and the goal is to get a good bed coals going and then augment those with the occasional stoking of wood. If a hotspot develops, just move the boards back a little until the heat is less intense.

The boards are propped end up on two by six boards lying parallel to the fire. The actual cooking is the easiest step of the process. The key here is to not get the boards too close to the fire and don’t flip the boards too soon. According to the Master Planker, there is an old adage that applies to the cooking “If flies are lighting on the meat, you’re too far away and if the board is scorching, you’re too close.” The slower the better, Whaley says. Depending on the weather, it usually takes about two to two-and-a-half hours to cook lake trout to perfection; cool and windy weather may require more time. If you are trying salmon and lake trout, start the salmon about an hour after the lake trout because they have a tendency to dry out far too fast. About half an hour prior to being done, liberally baste all the filets with butter and put the planks back near the fire. The butter, spices, and fire will create a wonderful, tasty crust on the fish. When done, cut the strings and serve the fish just off the boards while hot. 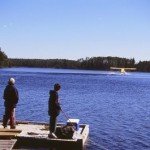 Preparing for a Fly In Fishing Adventure 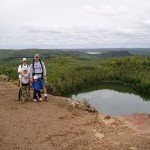