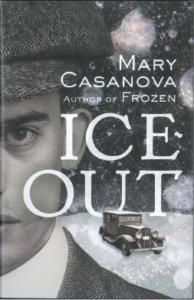 Ice-Out returns to the frigid and often brutal Prohibition-era borderland of author Mary Casanova’s beloved novel Frozen. After his father dies, 19-year-old Owen Jensen is responsible for keeping his mother and five brothers alive, but in a time of rampant bootlegging, corruption and poverty, things are tough. It gets worse after Owen is caught up in the suspicious deaths of a sheriff and border deputy. Inspired by real events in early 1920s Minnesota, and by Casanova’s own family history, Ice-Out is a story of young romance against terrible odds; stuck between rich and poor, and right and wrong.—Breana Roy