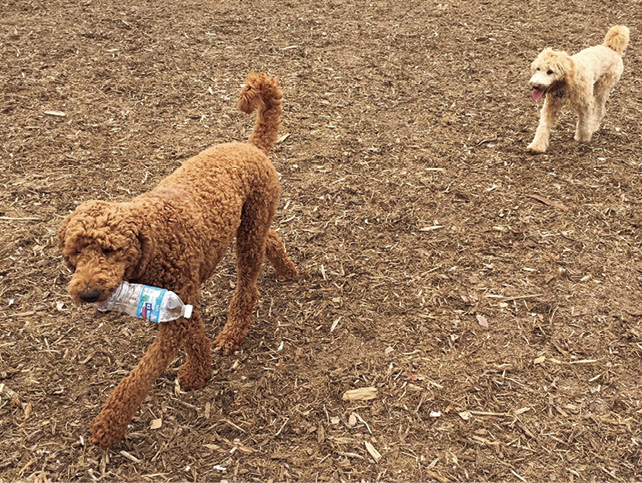 The new dog park will be twice the size of the old one at the Gunflint Horse Arena, which was a temporary shared space. | SUBMITTED

For many years, Cook County dog owners brought their dogs to the Gunflint Horse Arena in Grand Marais to enjoy some time playing off-leash. Originally created for horses, the space had been adapted to be shared with dogs until November 2021, when the horse park closed to dogs. Go Dog North Shore, a Cook County nonprofit that promotes active human-dog relationships, has been the force behind the plans for a new dog park in Grand Marais. Currently in the process of fundraising, Go Dog North Shore hopes to build the new dog park this summer, and that the new park will help dogs and their humans enjoy more time outdoors together.

Cathy Quinn, board member and founder of Go Dog North Shore, said that sharing the horse arena had always been a temporary solution, but that the long-term plan was to create a space specifically for dogs to be off leash. Having an off-leash dog park is an asset for any community with dog owners: not only does running off leash give dogs the high-intensity exercise they need, but dog parks also allow dogs from single-pet households to get out and socialize with other dogs. And for an area like Cook County, many pet owners value having a safe space to let dogs play without the risk of interactions with wildlife.

Quinn said that although Go Dog North Shore had been waiting for the Sawtooth Bluff development to come to fruition, the need to find a new space for the dog park soon has proved to be an opportunity to create a space that will be more beneficial for dogs and dog owners than the previous dog park was. Earlier in 2021, Go Dog North Shore decided to purchase a one-acre lot directly across 5th Ave W from the Gunflint Horse Arena, but they would need approval from the City of Grand Marais to build a park on the lot. The proposal to build a city park was approved by the Grand Marais City Council in May 2021, giving Go Dog North Shore the green light to start fundraising for the project.

“The plan is to keep the new dog park wooded, and it will be twice the size of the old one,” Quinn said. “We were glad to have access to the horse park, but it wasn’t very stimulating for dogs–it can create an intimidating environment for a dog to have too much open space with other dogs, where they’re just watching all of the other dogs coming and going. We also want people to be active with their dogs, and this way people will get out and walk around through the park with their dogs.”

The new dog park will be surrounded by a six-foot fence and will have a parking lot for six to eight cars. Altogether, the dog park could cost up to $65,000 to build. To achieve this goal, Go Dog North Shore began a fundraising campaign after the city council’s approval, and has so far raised over $45,000 in donations. Quinn said they recently received a $10,000 grant from the Lloyd K. Johnson Foundation, and are in the final push to meet their donation goal. Go Dog North Shore would like to see the project completed by the end of the summer.

In addition to building the new dog park, Go Dog North Shore continues to promote dog-friendly activities throughout the North Shore, including skijoring. For several years they have hosted Dog Days of Winter, an annual skijoring and sled dog derby race. While the event was on hold last year due to the COVID-19 pandemic, the plan is to resume in March. The event is held at Trail Center Lodge.

For more information about the Grand Marais Dog Park or Dog Days of Winter, visit: godognorthshore.org.