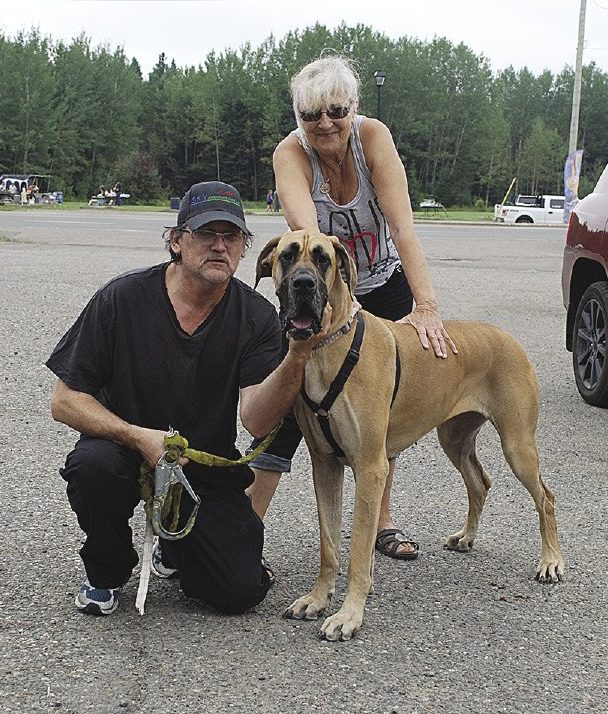 Margaret Foster-Hyde met up with trucker Garnett from Sky Freightways Ltd. and dog Amore at Kakabeka Falls Hotel. Margaret started the volunteer non-profit group in 2013 to provide free transport by truckers to move dogs (and now cats, too) to their new homes. | ELLE ANDRA-WARNER

A 19-month-old great dane named Amore recently hitched a ride across Canada from Golden, British Columbia to her owner’s new home in Nova Scotia, a journey of about 3,200 miles (5,150
kilometres).

Amore’s owner had moved back home to Bridgeport, Nova Scotia and the challenge now was how to get her Great Dane to join her. Travel by plane would be too traumatic for Amore, plus very expensive…yet what were the options?

Margaret started the trucking network in 2013 after she adopted a dog from Sudbury and found the shipping costs expensive to get the dog to her home in Kakabeka Falls. “That’s how the idea evolved, because of the high cost of transporting the dog,” said Margaret, who was a trucker for over 30 years.

Tapping into her trucking connections and using multiple whiteboards, Margaret handles from home the logistics of arranging for drivers, volunteers, and overnight foster homes for pets as needed. “It truly takes a village for the moves. We are all animal-loving volunteers and enjoy it.”

How does a pet become a travelling Furry Hobo? Any dog—and now cats, too—needing transport to new locations can be a Furry Hobo. Included are dogs rejoining their owners in new locations or being adopted by new owners; lost or stolen pets found and returned to owners; and rescue animals going to destinations for adoption.

About 400 dogs have already been transported with Furry Hobos ‘N Highway Heroes, with cat moves just recently added. Currently, there are about 20 volunteer truckers, mainly recruited by word-of-mouth, but Margaret says “We can use more!” The drivers do not charge for the ride, although Margaret suggests something like home-baking or a coffee gift card for them as a gesture of appreciation.

“For those truckers riding through Thunder Bay area on a Furry Hobo move, complimentary meals are provided by Kakabeka Falls Motor Hotel and Santorelli’s Truck Stop at Twin City Crossroads,” she adds.

Once the move is in transit, Margaret hosts live Facebook chats between herself, the pet owner, driver, volunteers involved in the ride and person receiving the dog at destination. “It’s like a family. We chat, get to see the dog or cat, and take pictures. It is more personal for everyone. Later we post the chat to the group’s Facebook to share with everyone.”

I met up with Amore, her transport driver Garnett and Margaret in the parking lot of Kakabeka Falls Motor Hotel in early September. Garnett, whose hometown is Halifax, Nova Scotia, was making his third Furry Hobos transport and having a grand time with Amore as his travelling companion. Amore joined Garnett in Calgary, after first hitching a ride there from Golden. Garnett joined the group as a “Hiway Heroes” trucker a couple of months ago and just prior to Amore, had transported six rescue puppies from Winnipeg to adoptive homes in Calgary.

Among one of the most challenging moves to arrange was at Christmas time for a couple returning to Canada after being in Japan for 10 years. “A volunteer picked up the dog at Vancouver airport, provided overnight foster care before pickup by the first driver. Using multi-drivers and volunteers for different legs of the journey, we did get the dog during Christmas to Headingly, Manitoba where the owners picked up their pet,” said Margaret, adding, “The longest move to arrange took 17 people and an overnight stay.”

Other recent moves have included a stolen dog returned to its owner in Kenora; three senior miniature Doberman Pinschers (in small dresses and pearls) from Winnipeg to Calgary; and two cats from Whitehorse. At any given time, there are a number of pets hitching rides with truckers.

I first learned about the group in a Letter to the Editor from Larry Brigham published in Thunder Bay’s Chronicle-Journal. He and his wife Cathy had adopted Tundra, the lab-husky dog of their friend who had passed away in Ottawa. Costs to travel by plane to Thunder Bay from Ottawa came to more than $800, but the friend’s daughter told them about Furry Hobos ‘N Hiway Heroes. Soon Tundra was being transported from Ottawa by truck driver Greg to her new ‘furever’ home with the Brighams at no cost.

Larry closed his letter with, “We want to especially acknowledge and make others aware of this group of truckers. Much thanks to these pet-loving volunteers.”

Further information is available by contacting Margaret via message through the group’s Facebook page, email dcatisback@gmail.com or phone (807) 632-1235. The person shipping the dog will need to complete a transport form, plus provide proof of vaccination. The number of drivers needed for a journey depend on the dog/cat’s present location and the destination.

Furry Hobos ‘N Hiway Heroes is a volunteer organization that arranges for movement of pets by transport truckers to new locations in Canada and the U.S. Since the service is free, there is no revenue but they could use donated items like blankets, bedding, collars, leashes, dog food, and free business cards. Contact Margaret Foster-Hyde for their current needs. 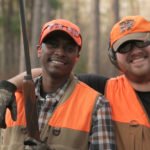 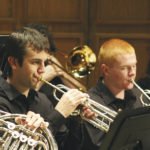