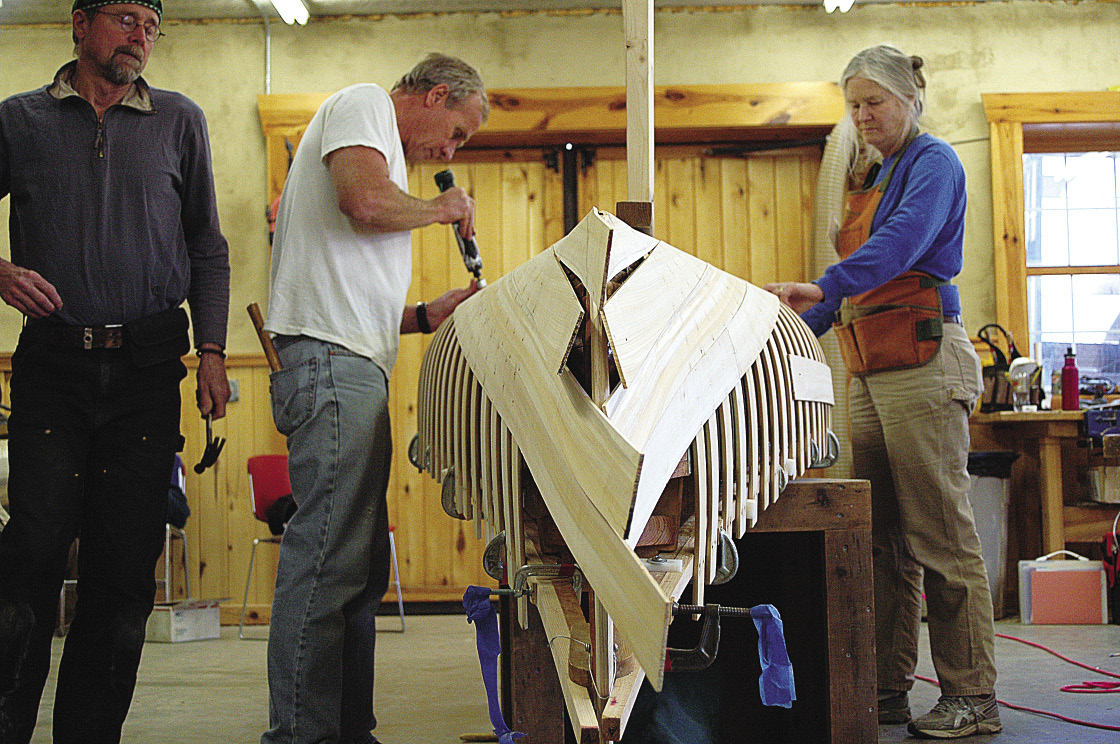 It’s a rare sight to see a wood canoe gliding down a lake or river, even in the Boundary Waters Canoe Area Wilderness. More often, these wooden boats are hanging on a wall—too pretty to paddle, their owners might say.

There are builders still building wood canoes, however, and there are paddlers still wanting to paddle these boats, which compared to the modern day Kevlar canoe are heavier, more expensive and more work to maintain.

Ask canoe builder Jeanne Bourquin why she has continued to build and paddle wood canvas canoes for several decades and she says most folks don’t realize how nice they are to paddle.

“It’s kind of alarming how few people paddle these canoes,” Bourquin said. “People think they are too archaic to use—they might fall apart or are too pretty.”

Bourquin, 62, grew up in Roseville and attended YMCA Camp Widjiwagan in Ely as a young woman. It was there that she paddled her first wood canvas canoe. Later Bourquin took a course at the Voyageur Outward Bound School (VOBS) in Ely in 1969 and later started guiding at the school.

At VOBS, a group of female guides decided to paddle the South Nahanni River together, a remote river known for its scenic beauty and large rapids. Bourquin wanted to paddle a wood canvas canoe on the Nahanni, so the group ended up with one wood canoe and two plastic canoes. Bourquin and a friend loaded up the brand new canoe and decided to practice lining rapids near Ely. They stuffed two Duluth packs with cast iron pans for weight. Practice was going well, Bourquin said, but then lining upstream, the canoe swung out into the river and was damaged—some broken ribs and a stem band needed replacement.

This was how Bourquin met Joe Seliga.

She and her friend brought the canoe over to Seliga’s place in Ely and he showed them how to make the repairs. She paddled the South Nahanni in this canoe without any more damage to the boat, but Bourquin joked, “I could have written a hiker’s guide to the South Nahanni.” They lined their boat around a lot of rapids.

Unfortunately, that boat, her first wood canvas canoe, burnt in the shed where it was stored that winter. Bourquin was 23 at the time.

Over a decade later, Bourquin found another wood canvas canoe to repair and she spent time at Widjiwagan working on Widji’s (as it’s often called) canoes and her own. She asked Jerry Stelmok to come teach a course in building wood canvas canoes at Widji. Bourquin was able to keep the form from the class, and built a canoe for Widji from it. This, she said, launched her career.

In the 30 or so years since then, Bourquin has built about 60 canoes, including ones that people have built with her in classes at the North House Folk School in Grand Marais. She’s also had people travel to her shop in Ely to help build the canoe that they are buying.

“I’ve profited from being a woman [in this business],” Bourquin said. “It’s unusual to be a woman doing this.”

Ely was also home to canoe builder Joe Seliga, who passed away in 2005. Seliga and his wife, Nora, built hundreds of boats together, many of which were sold to Camp Widjiwagan and Sommers Wilderness Canoe Base. Today Widjiwagan maintains one of the largest fleets of wood canvas canoes in the world with 100 boats. Seliga gave Widjiwagan his canoe forms before he passed, so the camp can continue to build his canoe designs. YMCA Camp Menogyn on the Gunflint Trail also maintains a fleet of 27 wood canvas canoes.

Bourquin said she learned from Stelmok, Seliga, and other builders and eventually designed her own boat called the Otter, which is her signature canoe.

Bourquin and her husband own a handful of canoes—and she still finds time to paddle.

“It’s really meditative. I didn’t realize that until I started learning about meditation. You aren’t being distracted. I think that’s why people feel so healthy on canoe trips. It’s hard to multi-task—you’re just in the present, paddling to the next portage and walking across.”

In the past, Bourquin has taught a full course on building your own wood canvas canoe at North House. This year, before the Wooden Boat Show, she will teach a class on building a square back wood canoe using Joe Seliga’s Fisherman form that he built in 1943.

Before there was Kevlar, aluminum, plastic or even canvas, there was birch bark—and that is what attracts Erik Simula to the oldest form of canoe.

Simula, born in Duluth, has lived in northern Minnesota all of his life, and now resides near Finland. He grew up paddling cedar strip and wood canvas canoes. He also worked for the Voyageur Outward Bound School in Ely for a time and, like Bourquin, nourished his love of canoeing and teaching outdoor skills at the school.

Simula said he was 20 years old when he first took great interest in birch bark canoes in museums and hung on the walls at resorts. He started doing research and realized that the bark canoes were really the original canoes (with the exception of dugout canoes, which were carved out of wood as opposed to constructed). He was intrigued.

At the same time he started learning more about Native American culture and married a native woman. They lived on the Leech Lake Reservation for a while and he began seeking out knowledge about building birch bark canoes, but often the knowledge wasn’t easily found.

Some of the advice was subtle. An elder would say, “I watched my grandfather and this is what I remember…”

Over time, the knowledge of birch bark canoes among Native Americans was becoming lost.

Simula said that the birch bark canoe is really an endangered cultural artifact. The traditions are not being passed on like they used to be. And, because of climate change, the birch trees are diminishing as well.

All northern tribes used these canoes, Simula said. There were differences between tribal forms because the canoes were built to the waterways that they were paddled on, and expanded on local material availability and technique preference.

It is all this history that makes Simula passionate for the birch bark canoe.

“There is a distinct beauty to the well-made birch bark canoe,” he said. “There’s something to be said about a canoe used for thousands of years.”

Simula built bark canoes for 15 years at Grand Portage National Monument, and in talking with visitors about the canoes, he said he found a number of common misconceptions. One is that many people think the white bark is on the outside. The reality is that the inside of the bark, which initially is yellow, then fades in sunlight to orange or red and eventually to white, found on the outside of the canoe. Also, people tend to think a birch bark canoe is easily made and quickly put together. Really, a functional canoe relies on good design, craftsmanship and select, durable materials. People have crossed Lake Superior in these canoes—they have to be made well.

In the last 20 years, Simula said there has been a resurgence of interest in birch bark canoes and this reflects the greater interest in retaining other aspects of traditional native culture, including native languages.

“I wanted to paddle the Arrowhead Region where I grew up. It was a way of living for me, to visit friends and family and take side routes.”

Halfway through the trip, he had to replace a two-foot section of bark on the hull of the canoe. But this is another thing Simula likes about the birch bark canoe. If you need to repair it, you can.

Though it’s not easy to maintain. You have to learn about pitching and keeping the bark supple. Yet, Simula said, if you’re in a bark canoe, and you hit a rock, you might get a scratch, but the hull is really durable.

For Simula, the love of paddling a birch bark canoe is encompassed by the history and tradition of the material. But more than that he said, “it is a spiritual experience. Think about the natural materials—cedar, bark, root, pitch. If you’re in tune with nature, it’s a powerful connection.”

Flattery won’t get you wildlife habitat 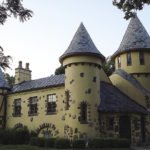