Whether it’s recent or from your childhood, it seems everyone has a favorite Christmas or holiday memory; something special that you’ll never forget. Maybe it’s when you finally got that puppy you had been begging for. Or perhaps it was the warm, fuzzy feeling you got while singing Christmas carols as a child at the local nursing home. Curious, we asked a few of our writers to tell us about their favorite Christmas memories.

I was with Sam at an Early Childhood Family Education class. He was three and playing with the other kids while I sat with the adults to talk about this parenting thing.

My dad called my cellphone. “You better get back here.” My folks were visiting Duluth from Maine. I strapped my son into his car seat and hurried home.

I tossed the grandson at the grandparents and helped my wife into the car. We drove a couple miles to St. Luke’s. We were halfway from the car to the building when Shelley said, “Just a second.” She stopped and looked at the ground, a little bent over. She held my arm for a long time. I thought she dropped something.

“Okay, let’s go,” she said. The pause was because my daughter tried to jump out into the parking lot. From the phone call until we held that kid was about three hours. She’s been in a hurry ever since.

We held our new daughter in a room overlooking Lake Superior. The ice was orange. A colorful sunset sandwiched between the solstice and the birthday of Jesus. The new baby brought Sam a little toy truck, which he seemed to appreciate. And we brought Grace home a few days later on Christmas morning. 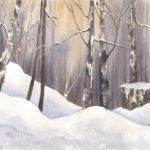