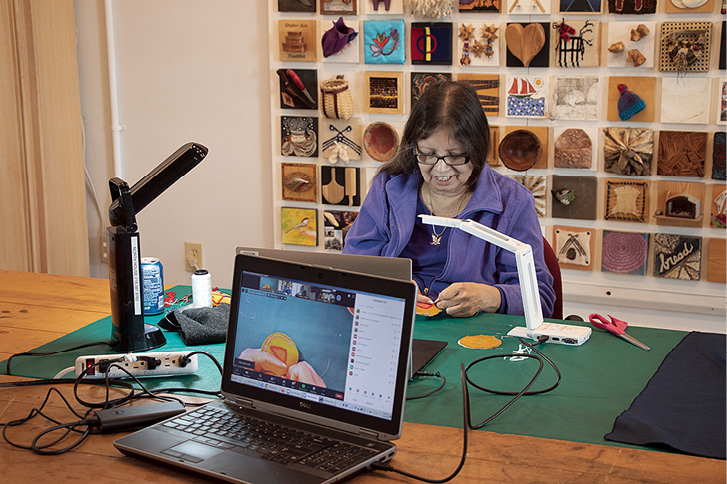 McIntire says that teaching virtually for the North House Folk School has its advantages, as well as disadvantages. | SUBMITTED

Beadwork is a craft rich in tradition in North America, one that dates back generations.

It is a beautiful, traditional form of artistic expression that is still being practiced today, and few people are more experienced with the craft than Grand Portage artist Marcie McIntire.

McIntire has been practicing beadwork since the age of 10. She first started with loom work and began developing her craft by watching her mother. McIntire is a member of the Grand Portage Anishinaabe, and has been living and practicing her work in Grand Portage for 34 years.

Today, her work focuses on traditional clothing, accessories and jewelry done in the floral-based style of Ojibwe beadwork that, according to the North House Folk School, is what she specializes in. In addition to crafting traditional works of art, she is actively teaching courses at the North House.

McIntire has been teaching at the North House since 2008, and, according to her bio, has taught her craft throughout North America—both at home on the North Shore and farther afield in places like Arizona and Florida.

“I have continued to teach a number of different virtual classes at the North House during the pandemic,” says McIntire, “but nothing in person yet.”

“In January of this year,” continues McIntire, “I taught a virtual class every Saturday on making baby moccasins, and then earlier in April and October I taught a North House course as an introduction to beadwork. This summer [the North House] thinks that we’ll be having in person classes, but you know with the pandemic and all it’s still a wait and see type of thing.”

While McIntire acknowledges some of the disadvantages associated with virtual teaching and learning, especially as it relates to a hands-on craft like beadworking, she has found the experience overall to be a positive one and is quick to point out the advantages that learning in this way provides students.

“Take my class on baby moccasins for instance,” says McIntire. “I spend two hours working with participants on Saturday, and then they have a video that they can watch during the week of the class.”

“So, there are advantages to it,” continues McIntire, “because if a student misses something or doesn’t understand a part of the lesson thoroughly, then they can go back and watch the video tape to figure it out.”

Prior to shut downs brought about by the pandemic, McIntire displayed her work at her gallery in Grand Portage, The Ningii-Ozhitoomin Ojibwe Art Gallery. Unfortunately, the gallery has been closed since everything first shut down in 2020, and at the time of this article, there are no immediate plans for reopening.

That being said, McIntire does from time to time show her work elsewhere in the community.

McIntire is an active member of the Northwoods Fiber Guild—an organization that began in 1988 as a way for fiber artists to connect with one another and is today a nonprofit for “people who explore personal creativity with fibers in all their varied and wondrous forms.” She will occasionally show her work at events put on by the guild, where she sells smaller items such as earrings and other beaded accessories.

As far as specific future events and projects go, however, McIntire did not mention anything particular outside of teaching at the North House.

“Grand Portage has been a bit of a ghost town since the pandemic,” says McIntire, “which has actually been kind of good for me.”

“I’ve planted two gardens,” says McIntire, “both with various herbs that can handle the short growing season up here. It’s been quiet, but it’s been nice.”

For more information on Marcie McIntire and her upcoming classes, visit the North House Folk School’s website at: northhouse.org/instructors. 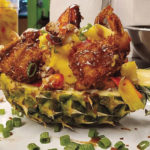