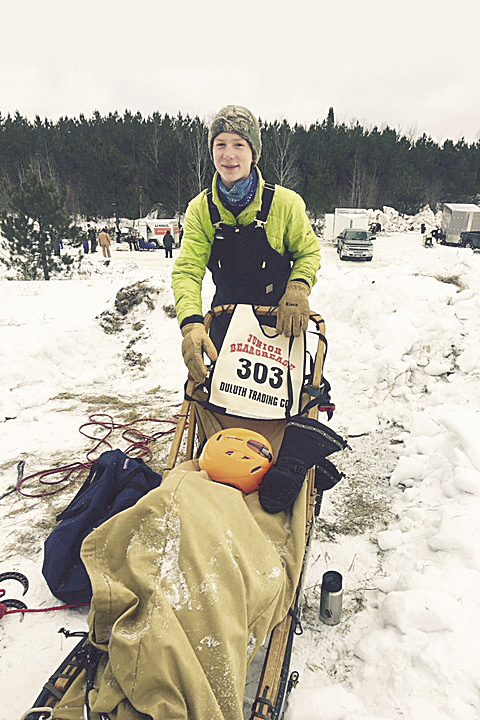 ELY—There is no doubt about it, 14-year-old Jasper Johnston is a busy teenager. As a freshman at Ely Memorial High School, he is on the cross country team and the cross country skiing team, while also training for his third Junior Beargrease. The races take place the weekend of January 28-31.

Last year, Johnston’s training paid off when he came in first place in the junior race. Although it is not a requirement to be fit to dog sled, Johnston says it does help.

“Especially with racing. You can help the dogs a lot by running up the hills,” Johnston said.

The 68-mile, Junior Beargrease race takes place within the mid-distance race, using the same route and rules and occurs the same weekend as the full John Beargrease Sled Dog Marathon. For Johnston, competing in the junior race allows him to combine his passions of being an athlete and working with animals. When he was in elementary school, he began reading books about dog sledding and had the opportunity to go on a few rides. By the time Johnston was in sixth grade, he decided to email a few different mushers. Some responded, some didn’t.

Peter McClelland, owner of White Wilderness Sled Dog Adventures in Ely, was one of the mushers who responded with an invitation to come train with his dogs. So in the fall of his seventh grade year, Johnston began training with McClelland’s dogs and still uses his dogs today. Over the years, McClelland and the guides at Wilderness Sled Dog Adventures have been a big help in teaching Johnston all about dog sledding and building relationships with working dogs.

“If you look through human history, our relationship with working animals has gotten us to modern times. That is getting lost,” McClellend explained.

He added that while pets are great, there is a different kind of relationship that is developed with working animals.

“I think that is why it is really important that kids work with animals. Not only to preserve the history of how things used to be, but we learn so much more about ourselves doing these things, too.”

The nine-time John Beargrease Sled Dog Marathon veteran, has nearly 100 dogs that he works with year-round. A typical day with his dogs begins in the morning with breakfast, cleaning the kennel, and then between him and four others, the training.

For Johnston, in order to keep building a relationship with the dogs, he has had to put in extra effort to ensure he has enough time and miles with them. The dogs, while trained year round with McClelland, need to get to know Johnston, too. He typically gets to see them a few times in the fall and about six or more times in the winter before the race.

And as for the Junior Beargrease race itself, Johnston says that his favorite part last year wasn’t just the fact that he won.

“Almost more so than winning, just getting to be a part of the Beargrease. Running at night, going down the trails, just me and my dogs. And, going down trails we’d never been on before was just really, really cool,” he said.

This year, he hopes to win again, but also compare his time to mid-distance racers, with the goal of one day competing in the full marathon.

To follow along with the John Beargrease Sled Dog races, visit beargrease.com.