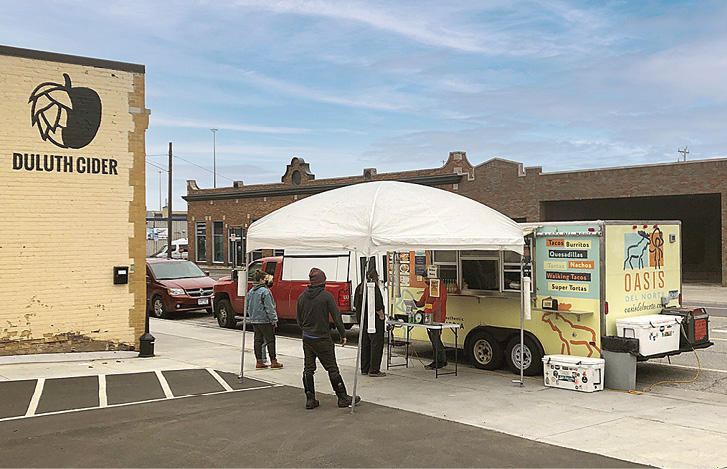 There’s something about tacos, that special combination of wrapper and warm fillings, that lifts the spirit. Lucky for people like me that find the mere mention of tacos uplifting, this year looks like it’s shaping up to be a great one, with taco options expanding in the region.

Since they opened four years ago, Hungry Hippie Tacos in Grand Marais has become so popular, their biggest challenge has been being open enough hours to meet the demand of enthusiastic diners. Now owners Kate and Jeremy Keeble have decided to branch out all the way to Duluth.

The Keeble’s first Cook County business was the Hungry Hippie Hostel, then they took over what had been the iconic Hughie’s Tacos, with Kate riffing on her personal theme of pastry-chef, and her husband Jeremy finessing his love of smoked meats. That collaboration created a unique taco that has built a huge fan base.

Calling their take on tacos “the northern tacos,” Kate says the frybread base they use is “different from any other dough.” After learning frybread recipes from friends in Grand Portage, Kate tweaked her recipe by adding wild rice flour that they mill themselves to showcase an important northern Minnesota flavor.

Rolled thin, the result is something akin to a fried pastry tortilla, which from there might transform into a Minnesota cheesesteak taco, “like a Philly cheesesteak that is a seven-napkin taco,” says Kate, adding, “we push the boundaries of what people expect, we are neither Taco Bell or authentic. I love that niche.”

A Duluth restaurant has been in the making for some time and Kate says that they have been looking for the right property for a couple of years. The new restaurant is in Duluth’s Lincoln Park neighborhood, and leaning toward local in all that she does, Kate says that the beer selection in Duluth will be heavy on the state’s craft beer selection, with an eye toward Minnesota-sourced in every direction.

The Keebles plan to maintain their homebase in Grand Marais and are hoping the new restaurant addition will connect them more readily with family living south of Duluth. With daughters Addie, 13, and Mavis, 7, “rooted in Grand Marais,” Kate says, “We are pretty isolated here in Grand Marais, but we will not be leaving any time soon.”

Those trips to Duluth are something that she is looking forward to, a chance, says Kate, to “have some fun and sneak away as a family to dinner, or the trampoline park.”

Hot and heavy construction plans are underway, with the design process already completed and hopes to have the doors open in the spring. The biggest lure of the new space for Kate is the doubling of the space compared to the original location.

“In the bigger space we can do more fun fillings like pickled onions, cilantro sprouts, and much more,” said Kate, adding that the bigger Duluth kitchen will also serve as a commissary kitchen to send out batches of things to Grand Marais. “Our wheels are spinning non-stop, there’s so much space.”

Talk about fun, just wait until you hear some of HHT’s flavors, like sweet potato, goat cheese and hot honey, say what? That’s nothing if not fun. A reputation for fun and fairness are some of the ingredients that Kate says are giving them traction in a difficult workforce climate.

“We just want to have fun with food, and it’s catching on that we are fun to work for,” said Kate. Add that up with the Keeble’s commitment to paying a good wage to support members of their communities, and you have happy staff making happy food. My idea of fun.

Oasis Del Norte is adding a storefront after years of making welcome appearances with their food trailer in Two Harbors and Duluth. Owner Eduardo Sandoval-Luna has now purchased a brick-and-mortar location in Duluth, also in Lincoln Park. Not abandoning his well-received route, Sandoval-Luna says the traveling taco-trailer remains his passion.

The vision that Sandoval-Luna is bringing to his new location is, “taqueria, fast food, casual,” explaining that the restaurant will function under the same concept as the beloved taco-trailer: a place to grab an order of tacos based on his mother’s cooking at her restaurant in Mexico; El Oasis.

Ask Sandoval-Luna what his inspiration is for expanding his taco reach and it remains the same purpose as when he started. “More sharing of my Mexican culture through food, just like I’ve been sharing with the northland since 2015,” he says.

Even “the crazy American taco,” that Sandoval-Luna eventually added to his menu because of persistent requests (that’s flour tortilla, ground beef, cheese, lettuce, tomato, sour cream: all ingredients Sandoval-Luna avoided with his authentic-style tacos), have an Oasis twist with his signature flavors based on his mother’s recipe.

Bowing to some pressure from north of the border tastes has not diminished the Oasis stature in the authentic Mexican category, with Sandoval-Luna saying, “We were the original street taco (in the northland), and the main thing we still sell is the street taco when we look at sales.”

Setting up shop at the Miller Hill Mall during the winter of 2020, Sandoval-Luna says it was a good test run on working out of a building, and the response he got encouraged him to expand to a permanent location.

Refitting the building space to become a restaurant is the job at hand and Sandoval-Luna is hoping they will open their doors by the coming summer. Acting as their home-base, he anticipates greater efficiency for stocking the trailer to launch taco expeditions even further to Virginia, Ely and Grand Marais.

Priding himself with having a positive influence on raising the taco game on the North Shore, Sandovaol-Luna says there’s room for such a popular favorite as tacos, and is confident that his brand will always have the special touch of his connection to his mother’s restaurant in Mexico.

In other taco news, Chacos Taqueria in Duluth is moving from a pop-up venue to a full-on storefront in Canal Park. And, wait, there’s more! Tacos, Tacos, Tacos plans to up their game with a new restaurant to be revealed in downtown Duluth soon. 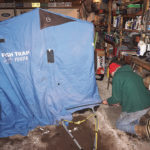 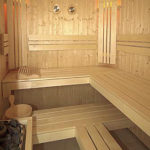 A brief history of saunas