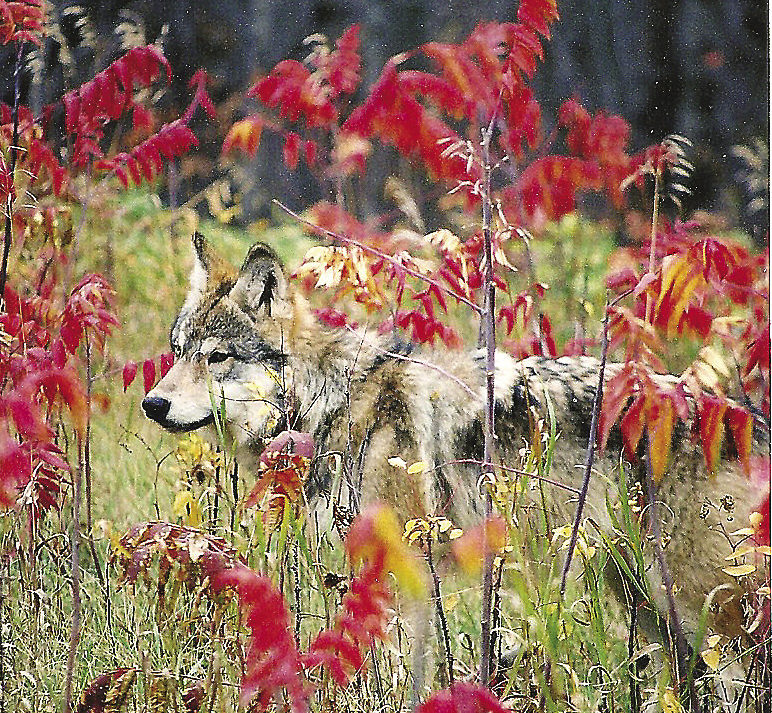 In 2015, three wolves were spotted on Michipicoten Island. That small pack has had a litter of pups every year since. | JOHN MCFAUL

North Shore—While teaching winter plant identification for a wolf ecology field course in 2005, I read The Wolves of Isle Royale by Rolf O. Peterson. I was captivated by the incredible stories and valuable knowledge generated by his long-term research project on Isle Royale. Wolves protect plants by controlling herbivores, he revealed. With that, I was hooked.

The story of wolves on Isle Royale began in the 1940s, when a pack crossed to the island on an ice bridge. Numerous plot twists later, the wolves of Isle Royale have taken several turns for the worse. Only two wolves remain on the island, and they are so inbred that they can’t or won’t breed. The National Park Service is weighing the options—including introducing 20-30 wolves to the park over a three-year period. A story that many like to think of as “nature taking its course” is about to get a new editor.

Meanwhile, on another Lake Superior island, wolves have just arrived.

At the 2015 Midwest Wolf Stewards Conference, Brent Patterson, a research scientist with the Ontario Ministry of Natural Resources and Forestry, reported on three wolves that had just been spotted on Michipicoten Island in northeastern Lake Superior. This little provincial park is the third largest island in Lake Superior, and sits about 10 miles offshore. Caribou were reintroduced to the island in the 1980s, and they have been doing well.

When asked to compare and contrast the situation on Michipicoten to the one on Isle Royale, Patterson quickly listed a few ideas: they are both protected islands in Lake Superior with a single ungulate prey, and a single large predator. At that time, both islands had three wolves. “But,” he added with a chuckle at his understatement, “those wolves are on very different trajectories.”

Recently, I called Patterson to get an update on the status of those first three Michipicoten wolves. The small pack of three wolves had a litter that first spring and a litter every year since. Although researchers from the Ontario Ministry of Natural Resources haven’t been able to count the pups, they know that wolves have an average of 4-7 pups per litter. Patterson expects to find about 20 wolves on the island this winter during their annual population count. That means those pups are doing well.

Even though their numbers are swelling, there isn’t evidence that a second pack has formed…yet. During the last population count, several of the older pups were off on their own.

Keeping track of the wolves is no easy task. Six have GPS collars, but only three of the collars are still sending data via satellite. The island is a “non-operational” provincial park, which means there are no maintained roads or trails. Visitors mostly access the island by water, and stick to camping on the beaches. One kayak camper unzipped his tent to find two wolves staring back at him in October 2014—that was the first sighting. This summer, that same lucky paddler spotted four wolves walking along the shore.

The wolves’ success seems partly, if not mostly, based on the abundant food available on the island. Caribou are their primary source of prey in the winter. After the spring thaw, wolves switch gears and focus on beaver until they become more elusive again after freeze-up. This two-pronged approach seems smart, but it may also spell doom for the caribou.

The caribou population is counted during aerial surveys each winter, population estimates are fine-tuned using trail cameras, and about 30 also wear GPS collars. Their numbers are declining. Where once they had the run of the island, now they must escape from a growing pack of predators. If it was just the wolves and caribou, the system might balance itself out eventually. Caribou numbers would decline to a point where the wolves couldn’t find enough food, then the wolf numbers would decline and the caribou herd could recover.

The presence of beavers complicates the system, though. The single population survey of beavers completed in October of 2015 revealed 1,300 active beaver lodges on the 71-square-mile island. That’s a higher density than Patterson and his colleagues have encountered anywhere else in North America. Those tender, juicy beavers could support the wolf population at high levels even as caribou decline. One by one, the wolves could pick off the remaining caribou whenever convenient, eventually leading to the complete extirpation of caribou from the island.

Caribou are a threatened species both in Ontario and Canada as a whole. As you might imagine, concerned citizens are pressuring the government to do something about the declining caribou numbers on Michipicoten Island. Their population isn’t in immediate danger of being wiped out, though, and for now land managers are inclined to let nature take its course. Just like on Isle Royale, watching carefully as a natural drama plays out is incredibly valuable to science.

As much as we humans might choose to cheer for either wolves or caribou—the charismatic megafauna—beavers could be the real influencers on this island. With such a high population density, they’ve had a huge effect on the hydrology—altering the flow of water with their many dams—and the vegetation. Patterson reports that some areas have been impacted so heavily by beaver chews that they resemble young clear-cuts. In other places, alder thickets tangle up the swamps. This is not an easy place to take a walk.

From a hiker’s perspective at least, Patterson describes the island as “a beautiful but nasty place in the summer.” That’s part of the reason why human visitors mostly stick to the beaches. As unwelcoming as this landscape may be to us, it’s a good example of how beavers are “keystone species,” and have an outsized influence on their ecosystem. Innumerable species of birds, fish, amphibians, invertebrates, mammals, and more rely on the wetlands and wet meadows that beavers create.

When you add in the fact that the presence of beavers may someday permit wolves to extirpate caribou, then it’s not hard to see that these waddling lumberjacks have more than just a supporting role in the drama unfolding on Michipicoten Island.

It has become clear that the Michipicoten story isn’t just a rehashing of the plot from Isle Royale. What will we learn from this new, long-term, predator-prey study? Only time will tell. Even a seasoned researcher like Patterson admits that “each year is more interesting than the last.” 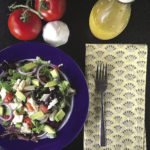 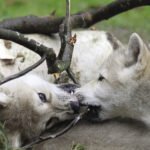 The life of wolves in the wild