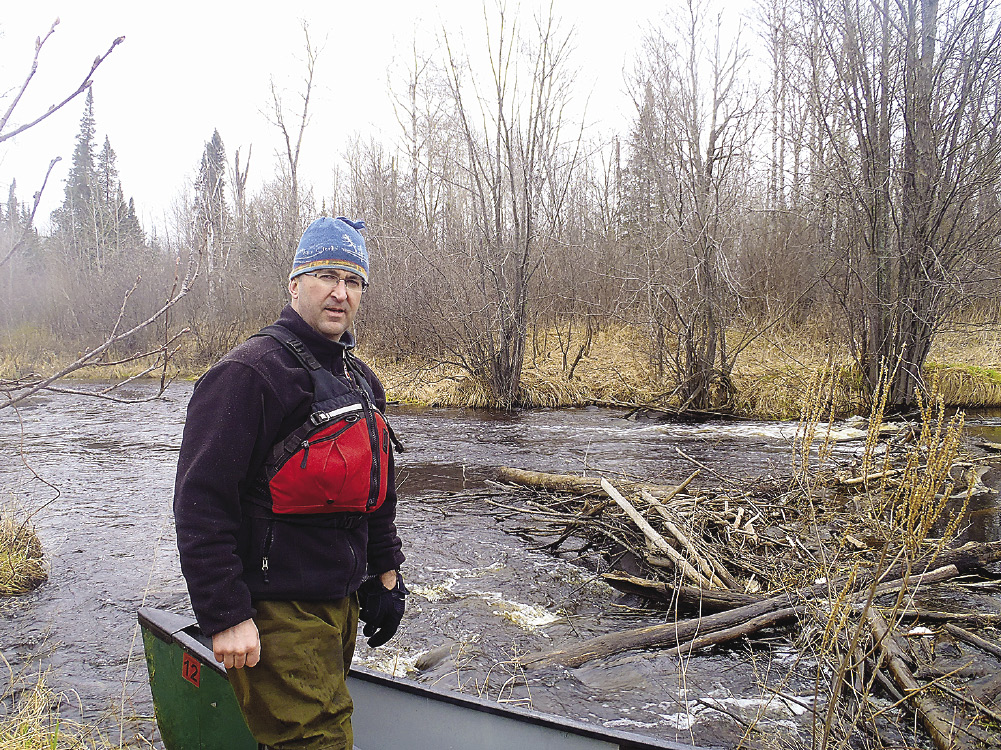 Eric Chandler, glad this is the only beaver dam they had to portage. | LUKE HULS

As a kid, I read about polar explorers and expedition mountain climbers. I wanted to go on extreme adventures like Douglas Mawson and Edmund Hillary did. But I was rooted in the Midwest, and you can only go so far on a banana-seat bike. So, I became an imaginary pioneer. I patted my head and rubbed my tummy and sang “Yankee Doodle” for a few seconds. I told myself I was the only person in the world doing that. It wasn’t Everest, but it worked for me.

I’m older, but still thinking like Walter Mitty. North Face doesn’t sponsor me. I don’t climb in the Himalayas. Most excitement happens within a single-day road trip. The good news is day-trips abound near mighty Duluth.

A key ingredient of my outdoor time is avoiding crowds. Just 40 miles north of Duluth, the Whiteface River flows from the Whiteface Reservoir south and west to where it joins the St. Louis River. There’s a 14-mile leg between the Vermilion Trail (Hwy. 4) and the Comstock Lake Road where there’s no easy escape. It’s not like the Grand Canyon, but you’re committed. Every time I drove past the river, I imagined following it downstream like the little canoe in “Paddle to the Sea.”

I could only find one guidebook that mentioned this stretch of river. There’s a DNR map dedicated to the St. Louis River that includes the Whiteface River as an afterthought. In the modern world, this small amount of information qualified me as a real explorer. I traced the river’s satellite picture in Google Maps to see what I could find. As a novice paddler, I was worried about rapids and the more likely beaver dams. It looked smooth. It was encouraging to see two kayaks in one satellite view.

There was one stumbling block: My wife demanded I go with a buddy. I whined about this, but she insisted. The map of the river sat on my desk at work for three years. Finally, my friend Luke Huls aligned his schedule with mine. The guidebook said you could paddle the first stretch with a 50-cubic-feet per second (CFS) flow out of the Whiteface reservoir dam. It also said 100 CFS would be better. Flows out of the dam were 50 CFS, so we launched the greatest mini-expedition in history.

In April 2012, we put in just above the tunnel that flows under Hwy. 4. Our spirits were high as snow fell out of the gray overcast sky. We paddled under the highway. We had extra clothes in a dry bag and some lunch. We wore chest waders, since I didn’t know how much portaging we’d be doing.

In less than a half mile, we were beached like a green Royalex whale in a rocky riverbed with water only 3 inches deep. Luke took the rope attached to the bow and pulled the canoe along like a reluctant mule. He muttered something like, “Chandler really knows how to pick ‘em.” Sometimes we walked downriver outside the canoe. Sometimes we kneeled on one leg in the canoe and scooted the canoe along with the other. I was drenched. From sweat, not from the river.

Thankfully, the rock bashing ended after 3 miles and we had clear sailing in the smooth black water. We saw several beaver lodges built against the riverbank. A bald eagle was kind enough to pose for a picture. We saw two different cable systems that helped folks shuttle across the river to their deer shacks. There was one old tumbledown cabin. And a lot of peace and quiet.

We stopped for lunch in a big sweeping bend of the river through a grassy clearing. You could see the far off stands of poplar. The sky was gray, and I kept thinking we might as well be in the middle of Canada. We were only an hour from town, but we were isolated.

We pushed on and enjoyed the river as it sped up and deepened nearer the takeout. We saw a trio of trumpeter swans that were shadowed by a trio of Canada geese. The paddles occasionally drummed the side of the canoe. There were big schools of fish lurking in the tea-colored shallows that we couldn’t identify. At one point, we had to portage around a beaver dam that spanned the river. I was surprised there weren’t more of those.

During a quiet curve I commented about not seeing a soul. Just then, two kayaks appeared going upstream. We said hello to the two ladies. We told them about our major expedition. The older lady said she was on the river every day and that we were the first people she’d seen in more than six years. I wondered if they were the ones in the satellite photo of the kayaks.

We smiled as we strapped the canoe to the roof of the truck. Two people out of 7 billion earthlings canoed the Whiteface River. Maybe the first in six years to paddle that water. That counts as avoiding crowds. And I didn’t have to sing while patting my head and rubbing my stomach.

A few months later, the Flood of 2012 hit Duluth. Flows out of the dam topped 2,000 CFS. That’s probably too much. So, try this trip. There must be a sweet spot between 50 CFS and flood stage where you can avoid walking your canoe like a dog on a leash.

This story was originally published in the May 2014 issue of Northern Wilds magazine. 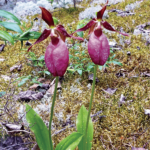 Orchids of the Lake Superior Basin

In defense of sausage makers