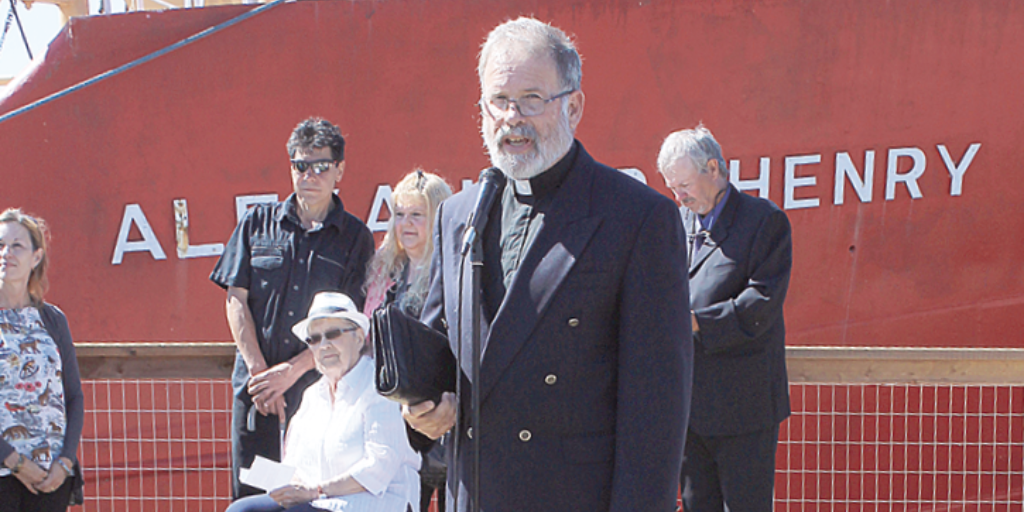 On July 18, Reverend Canon Ed Swayze of The Mission to Seafarers did a “Blessing of the Ship” for the former Canadian Coast Guard icebreaker Alexander Henry, now a museum ship in Thunder Bay. | GLENN WARNER

One Thunder Bay shipping agent called them the “real unsung heroes here in the port”.

He was speaking about the work of The Mission to Seafarers in Port of Thunder Bay where Reverend Ed Swayze and volunteers offer resources to meet the needs of seafarers from ships visiting the port. Similarly in Duluth, the Seafarers Center with Pastor Paulson, staff and volunteers provide similar services to the crew members of ships that come into the Port of Duluth-Superior. While both ministries are available to crews of ocean-going (“salties”) and freshwater bulk carrier freighters (“lakers”), most seafarers at the centers are from foreign-flagged ships.

Last year, nearly 400 ships arrived in Thunder Bay, including almost 100 salties, while the ports of Duluth and Superior average about 900 ships per year, with 90 percent being lakers. Since 1959 when St. Lawrence Seaway officially opened, salties travel more than 2,300 miles (3,700 km) from the Atlantic Ocean through the Great Lakes to the heart of the North American continent, about a five-day journey.

The Mission to Seafarers is a world-wide Anglican Church ministry founded in England in 1856. Today with stations in more than 200 ports across 50 countries (eight in Canada, four in U.S.), it’s the world’s largest port-based welfare operator providing a range of supports to 1.5 million seafarers. The ministry website notes that it “strives to meet the needs of all seafarers and their families, irrespective of faith or cultural background. Its simple mission is to care for the shipping industry’s most important asset: its people.” Its purpose is to “promote the spiritual, moral and physical well-being of seafarers and their families world-wide.”

Thunder Bay’s Mission to Seafarers was established in 1961 and is located in a trailer at Keefer Terminal. The Mission’s services are offered without reference to race, creed or religion with most services free and available to any seafarers in the Port of Thunder Bay. The chaplain to the Mission to Seafarers is the Reverend Canon Ed Swayze, who started in 1994; he is also the Pastor of St. Stephen the Martyr Anglican Church and chaplain at HMCS GRIFFON.

Services provided by Thunder Bay’s Mission include ship visits; transporting crews in its 10-passenger van to various destinations like shopping, the seafarers centre, city tour, church, etc.; a chapel for prayer and quiet reflection; a games table, TV, internet, Wi-Fi; donated clothing; a library; and a safe environment. Since 2016, the Mission has delivered Christmas gift bags to ships in port in December; the bags include the traditional inclusion of two donated knitted items (toques, scarves, neck warmers) per bag. And each June, there is a Blessing of the Fleet by the Mission at the marina.

In a radio interview with CBC’s Lisa Laco on Superior Morning (June 20, 2018), Swayze said the Mission transported about 800 seafarers last year. “Lot of the work is unseen but we look after the seafarers.”

Duluth’s Christian-based Seafarers Center was founded by Duluth’s late Reverend Norbert Mokros, a German-born Lutheran pastor who aided stranded seafarers in the 1960s during a labor strike. Incorporated in 1969 as the Twin Port Ministry to Seafarers, the ministry opened in a waterfront house trailer, then moved in 1975 to its present home, a former Roman Catholic parish house on Duluth’s West Third Street. The ministry’s chaplain is Pastor Doug Paulson, who also works part-time in the campus ministry at University Minnesota Duluth.

An ecumenical ministry, the Seafarers Centre is governed by a board and supported through 13 denominations throughout a seven-state area and private donations. According to the ministry’s website, the Centre’s main purpose is to “offer hospitality and assistance, albeit accompanied by spiritual guidance for those who wish it” and it “strives to provide an agency, a ministry for the spiritual, social and personal needs of seafarers who are in the twin ports of Duluth, Minnesota and Superior, Wisconsin.”

Both the seafarer ministries provide hospitality, assistance, spiritual guidance when requested and a safe trusted place. 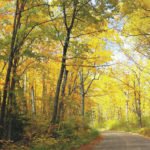 Chasing Color and Knowledge: A Fall Drive Up the Shore 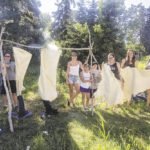 Tanning Hides as an Act of Reconciliation