North Shore—Even as the snow melts and signs of spring emerge, green-up can feel far away. Some birds return early though, and their lilting calls or soaring silhouettes can lift our eyes and spirits.

Turkey vultures are one of the earliest returning migrants, even though they may have journeyed back from as far away as South America. They don’t have the jaunty colors of red-winged blackbirds, or a thrilling conk-la-ree! song, but by drawing our eyes skyward, they can still provide us with an early spring mood-boost.

Although their soaring shapes are often mistaken for eagles, a couple of traits set turkey vultures apart. First, they soar with their gray-fingered wings in a V shape—which makes a handy mnemonic: V for vulture. Their flight also tends to look unsteady, as if they are dumping the wind. While it may make them look like awkward amateurs, this rocking flight probably helps them soar better at low altitudes. Turkey vultures are so good at finding and using rising thermals of warm air that they rarely need to flap their wings.

Those rising thermals also carry the scent of dinner: ethyl mercaptan. This gas is found mixed with the propane in your tank, as well as wafting up from decaying animals. Both humans and turkey vultures can detect it at extremely low levels. This helps vultures find food beneath the forest canopy.

Spring is a perfect time for vultures to return, since the melting snow often reveals all sorts of winter carcasses that need cleaned up. Tibetan Buddhists respect the birds for their role in cleansing the earth and continuing the food chain. They have ritualized this in “sky burials,” where vultures consume the dead.

Writer and environmentalist Edward Abbey wanted to be reincarnated as a vulture. In his book Desert Solitaire he wrote, “If my decomposing carcass helps nourish the roots of a juniper tree or the wings of a vulture—that is immortality enough for me. And as much as anyone deserves.”

On a practical level, the scavenging ways of turkey vultures help dispose of carcasses that could otherwise breed disease. And although they prefer fresh meat, they can tolerate pretty rotten fare. Turkey vultures have impressive immune systems that can ward off and even destroy the microbes that cause botulism, anthrax, cholera and salmonella. Their stomachs, gross as they may seem, help purify our world.

Of course, the contents of their stomachs can also be exploited as a weapon. “Don’t get too close to a turkey vulture,” warned the park ranger on my first-grade field trip. “They’ll throw up all over you!” That warning stuck with me.

Projectile vomiting has several benefits. It is a defense against potential predators, including humans. The foul-smelling mix of semi-digested meat and digestive fluids can sting if it reaches the predator’s eyes. Plus, if the vulture was just gorging on a roadside carcass, it probably needs to lighten its load before trying to launch an escape flight.

While their stomachs kill some bacteria, their urine kills others. In order to keep clean while they feed on carcasses, turkey vultures urinate on themselves. This not only kills bacteria on their legs and feet, it also helps to cool them down.

Despite what you may think, keeping clean is important to vultures. They preen their body feathers frequently, but they can’t preen their own head. The bare skin on their head—gray as a first year and red as an adult—allows turkey vultures to stick their head deep into the body cavities of dead animals to get at the choicest parts without getting any feathers gummed up. Then, sunlight sterilizes the skin.

Although they may appear gross at first glance, turkey vulture’s scientific name—Cathartes aura—is quite appropriate. It means “purifying breeze.” What a lovely addition to spring. 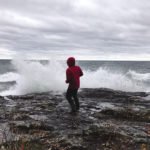 New to the outdoors? Just go for it! 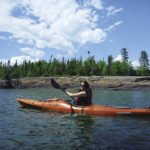 The canoe vs. kayak challenge