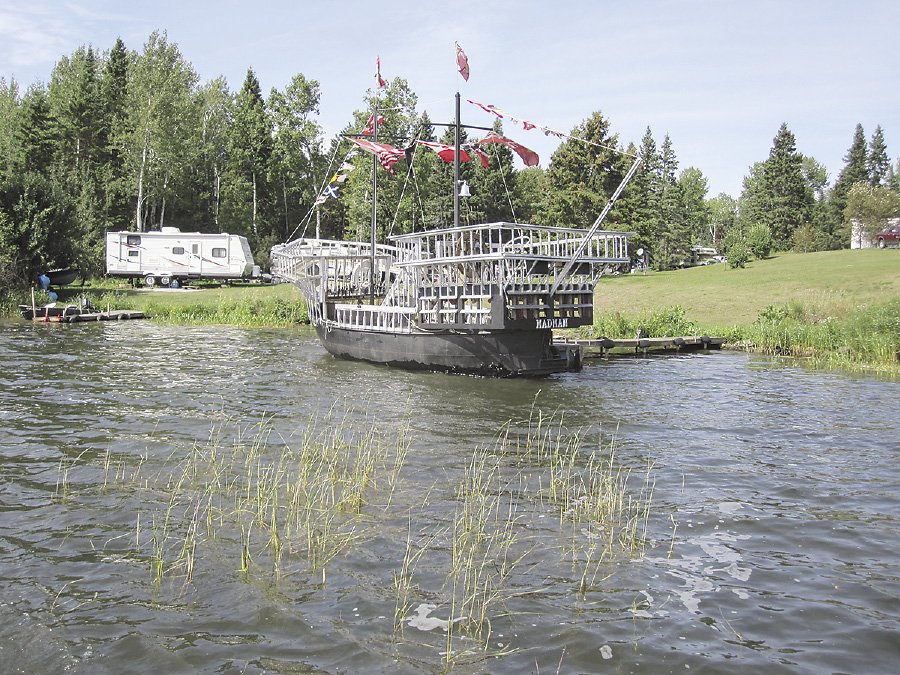 The pirate ship Madman was launched in July of 2011 by captain and creator Brent Skjarstad. | BRENT SKJARSTAD

Whitefish Lake is a resort and recreational lake on Hwy 588 between Thunder Bay and the Pigeon River Border. Sheltered by the Silver Mountain Range, the lake is 7 ½ miles long and 3 miles wide, with an average depth of 8 feet. Pelicans and cormorants take flight as camouflaged motor boats, used as duck blinds, skim the surface of the lake. Anglers fish for pickerel, pike and perch. Oddly, there are no whitefish in the lake. But even more unexpectedly, cutting through the fog and weedy water, sails the pirate ship Madman.

The ship was launched in July of 2011 by captain and creator, Brent Skjarstad. “The first time I took the ship out on the lake, there were at least 15 boats following me and taking pictures. One woman almost fell off her dock while snapping a shot,” said Skjarstad.

In the beginning, the boat attracted attention on the same lake by another owner. It was fashioned to resemble Noah’s Ark; but when Skjarstad secured possession of the boat, over 10 years ago, he began to make plans for a pirate ship. The hull of the ship was a bare bones 40-man lifeboat from the fleet of the N.M. Paterson and Sons Ltd., (marine division of a shipping and grain company) that had been a fixture of Thunder Bay since circa 1920. The aluminum life boat is believed to be 50 to 75 years old. Originally, it had only theatre seats with no ores and no motor. Once the crew was safely in the boat, they just floated and waited for rescue.

To begin the transformation for the pirate ship, Skjarstad lined the hull with wood and made the galley, a covered sitting area with benches and a table. Just above the galley is the stern deck and wheelhouse. The wheel is a mosaic of 50 pieces of wood that took 40 hours to assemble. Next, repurposed stairs from Papa Joe’s Pizza were cut in half to lead to either the stern or the prow of the ship, and 18-foot tall ABS plastic pipes would serve as the masts. Meanwhile, 249 spindles were collected and painted to be used all over the ship. For two years, Skjarstad accumulated and assembled the pieces. Once he had all the parts, it took him two months to put the ship together.

The ship’s hull is 30 feet long and 10 feet wide, but the stern deck is 12 feet wide. The ship is quite stable on the water due to the 20 cinder blocks for ballast under the floor boards of the hull. There are no sails on the ship, so a 25hp motor is connected to the steering wheel that steers in reverse.

“It’s good for anyone who tries to steal my boat, they won’t know how to drive it,” captain ‘Brent-Dog’ Skjarstad said.

The captain plays up the part of a salty sailor to entertain friends and family, especially young scallywags, as they cruise the open water on the pirate ship Madman. And the experience is additionally brought to life with details on the ship such as the large skull that is mounted just under the bowsprit (the spar that extends forward from the bow). The galley is decorated with miniature faces of sailors and weather worn flags. And of course, hanging from the side of the boat, is Jacob’s ladder; a ladder used to climb aboard the ship if you fall in the water, which the captain has had to use only once…so far. 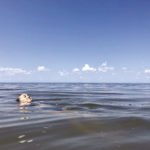 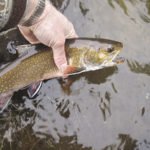