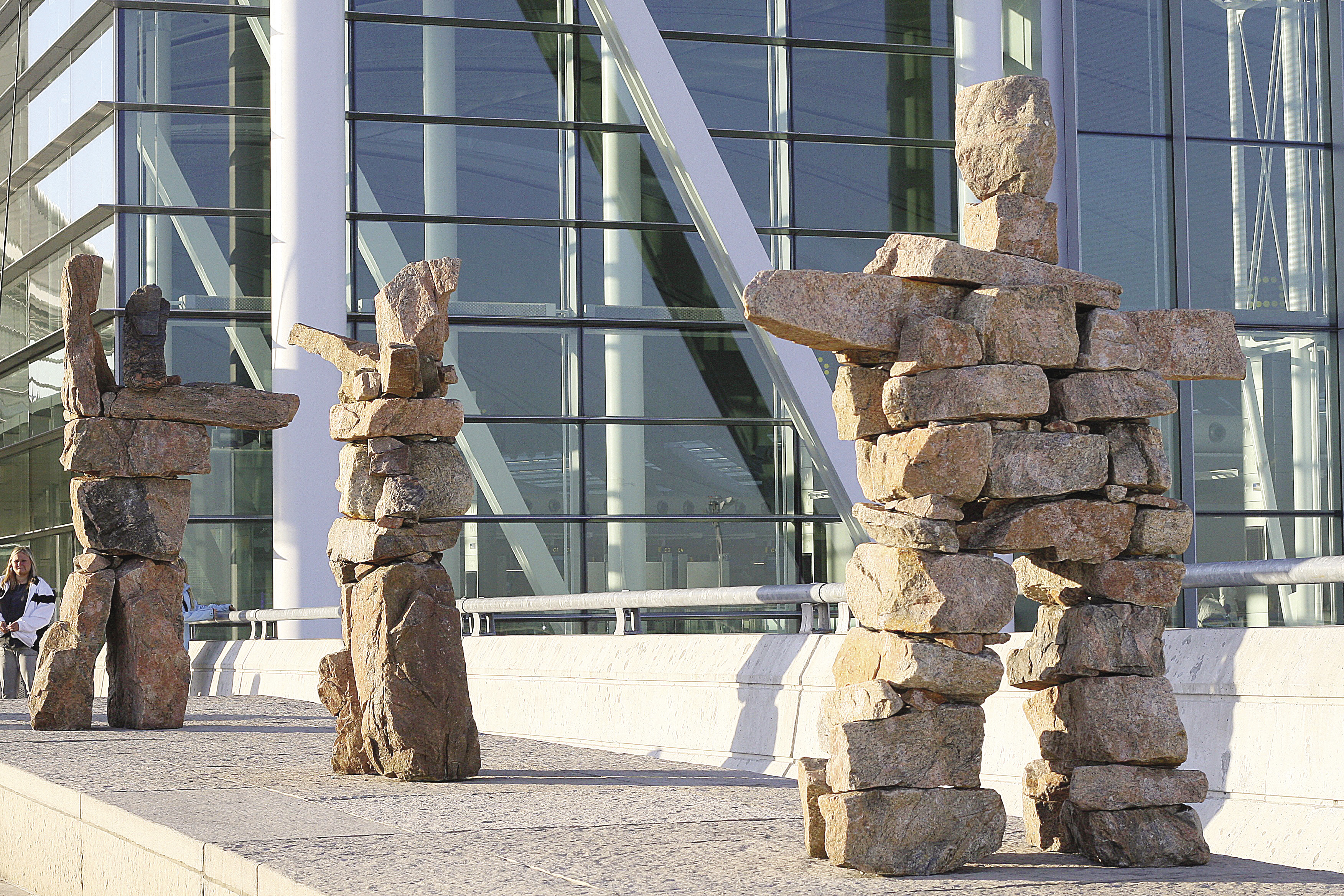 These three whimsical Inuksuit made of stacked orange granite stones greet passengers at the departure entrance at Terminal 1 of Toronto's Pearson International Airport.

Travellers along the highways and byways in our Northern Wilds are sometimes baffled by the piles of rocks balanced on top of rock croppings, perched on boulders or placed at the edge of the boreal forest, called Inuksuk (also spelled Inukshuk; plural form is Inuksuit). They have asked if these mysterious stone markers have any special meaning.

So, what is the story behind these hand-built stone works that are now found throughout the U.S., Canada, and beyond?

The history of these human-made stone landmarks goes back more than 9,000 years to when they were built and used by the northern peoples of the Arctic. Inuksuk means “something which acts for or performs the function of a person” in Inuktitut, one of the languages of the Inuit. The Inuksuit were constructed by stacking piles of rock slabs and stones into various shapes and sizes above the treeline across the Arctic landscape from Alaska to Greenland. On Foxe Peninsula, in the High Arctic on Canada’s Baffin Island, approximately 100 Inuksuit built as far back as 2,000 years ago are still standing. The site is now a designated National Historic Site in Canada.

Traditionally, Inuksuit were built as communication, navigation and survival aids, the stone arrangement indicating the purpose. In his article The Ancestral Inuksuk, Inuit cultural teacher and politician Peter Irniq likes the definition written in the early 1950s by two Hudson Bay Company employees in the Arctic, who defined Inuksuk as, “traditional stone beacons usually made of piled stones on some prominent point or hill as a guide to travelers and hunters or to give other information about game or directions.” The Inuksuk is a cultural symbol of the Inuit and an emblem of the North.

In today’s world, the name Inuksuk is also given to the piled stone monuments that have a head, body, legs and arms. The correct Inuit name for this type of inukshuk is actually inunnguaq, meaning “in the likeness of a human,” but most people, even the Canadian government, use the word Inuksuk. 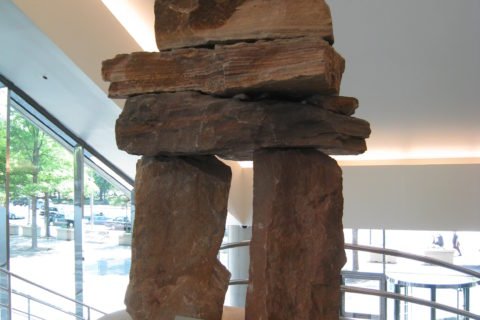 These humanoid-like stone statues have moved far beyond the Arctic. For example, an Inuit-created Inuksuk sits in the lobby of the Canadian embassy in Washington, D.C. Three big Inuksuit greet people at the entrance to Terminal 1 at Toronto’s Pearson International Airport. On the shores of Lake Ontario in Toronto stands a nine-metre Inuksuk, and in Chicago at the Field Museum, an Inuit-created Inuksuk is part of the museum’s permanent exhibition, “The Ancient Americans.” And the world’s largest stone Inuksuk, built in 2007 in Schomberg, Ontario, is 37.33 feet (11.377 metres) tall and weighs 90 tons.

Some say credit for the worldwide popularity of the stone people as cross-cultural symbols for friendship and hospitality goes to Ilanaaq the Inuksuk, the mascot logo of the 2010 Winter Olympics in Whistler, B.C. His statue now sits at the top of Whistler Mountain.

In our Northern Wilds, landmark Inuksuit include Vermilion Bay’s gas station inukshuk named “Path Finder” along the Trans-Canada Highway, west of Dryden. In northern Minnesota along Highway 61, just south of the U.S.-Canada border, a large Inuksuk marks the entrance to a scenic Lake Superior lookout. In Kellogg, Minn., the two-foot tall “Icabod Inukshuk” welcomes visitors to the Lark Toy Museum and Store.

Builders of the modern-day roadside Inuksuit add another meaning to the legacy of the Inuit ancient stone markers—it is about marking our presence and saying “I was here.” There’s plenty of those markers, everywhere from hiking trails and lake shores, to roadsides. Six years ago, a journalist from Sudbury, Ontario, counted 93 Inuksuit along the 108-mile (173 km) stretch of highway between Sudbury and Parry Sound. And a few weeks ago in the village of Nakina (216 miles northeast of Thunder Bay) while driving down a back road, I spotted an eclectic mix of small Inuksuit tucked at the edge of the forest.

How to build an inukshuk

Gather rocks, preferably with flat spots or edges, pick a building spot, and then stack the stones atop one another (not as easy as it sounds).

According to Inuit tradition, once built, an inukshuk must never be destroyed.

Preparing for the Compassionate Hunt