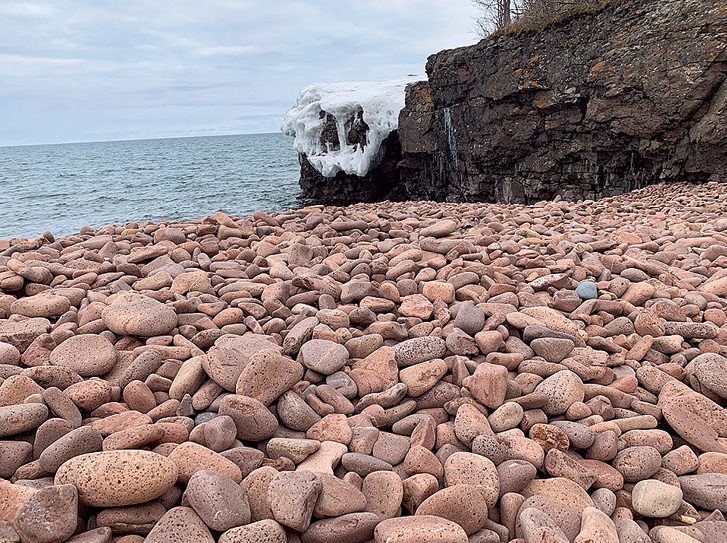 TWO HARBORS—It’s not hard to feel insignificant as you stand along Lake Superior’s shoreline, gazing out into a seemingly endless sea of blue. Yet one seemingly insignificant person—who cared about the lake and its stunning shoreline—had the power to save one of its most interesting beaches.

Iona Lind fell in love with the pink stones found along the beach that later was to bear her name. The smooth, rounded stones—some mere pebbles, others as large as a grapefruit—make music if you’ll only stop to listen. As the waves roll in, they pick up these pink rhyolite stones, rearrange them and gently set them down in a sound sort of like a million marbles settling together. Some have described it as a tinkling sound; others claim Lake Superior is singing.

As you walk along the uniquely colored igneous rock, it’s almost like striding across a child’s ball pit. The rocks clatter and roll underfoot, giving off a hollow sound, making you think you might slip underneath them into an abyss at any moment.

This one-of-a-kind crescent-shaped beach was formed when a 30-foot rhyolite cliff with felsite bedrock just to the north began to erode. Over time, the cliff has been battered by angry seas and cracked by frost action, causing it to slowly crumble into Lake Superior. The salmon-colored stones wash into the lake, where waves grind them and polish them into smooth, palm-sized rocks before throwing them up onto the shore. Just 300 yards south of the cliff, a dark headland of basalt walls in the rhyolite stones and keeps them from washing farther south.

The sights and sounds of this beach were so captivating for Iona that she and her husband, John, decided to settle along the shore here and open a resort in the mid-1930s. The Linds operated Twin Points Resort for more than 50 years. In its heyday, the property sported cabins, a restaurant and even a grocery store. However, in time, John passed away and the Lind children elected not to continue operating the resort. So, Iona decided to close the resort and donate her beloved beach to the DNR so everyone could enjoy the sights and sounds of the smooth, pink stones.

The site, located right along Highway 61 between Gooseberry Falls and Split Rock Lighthouse, was made into an 11-acre Scientific Natural Area to preserve this rare, undisturbed area.

Today, the Twin Points Protected Access boat ramp serves as the parking lot for those wishing to access Iona’s Beach. The Gitchi-Gami State Trail runs through the parking lot as well, if you want to hike or bike along the lake. From the parking lot, it’s an easy two-minute walk down a blacktopped path that changes to gravel to reach the beach.

If you’ve got a few minutes, the next time you’re passing through, take the time to stroll down to the beach. Turn a pink rhyolite stone over in your hand and ponder the awesome power of the lake that rounded these stones. Most of all, pause to listen to the sound of the rocks as the waves pick them up and lay them back down. Is the sound a tinkling or more of a clattering? Or is Lady Superior actually singing? You decide. 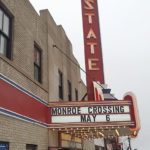