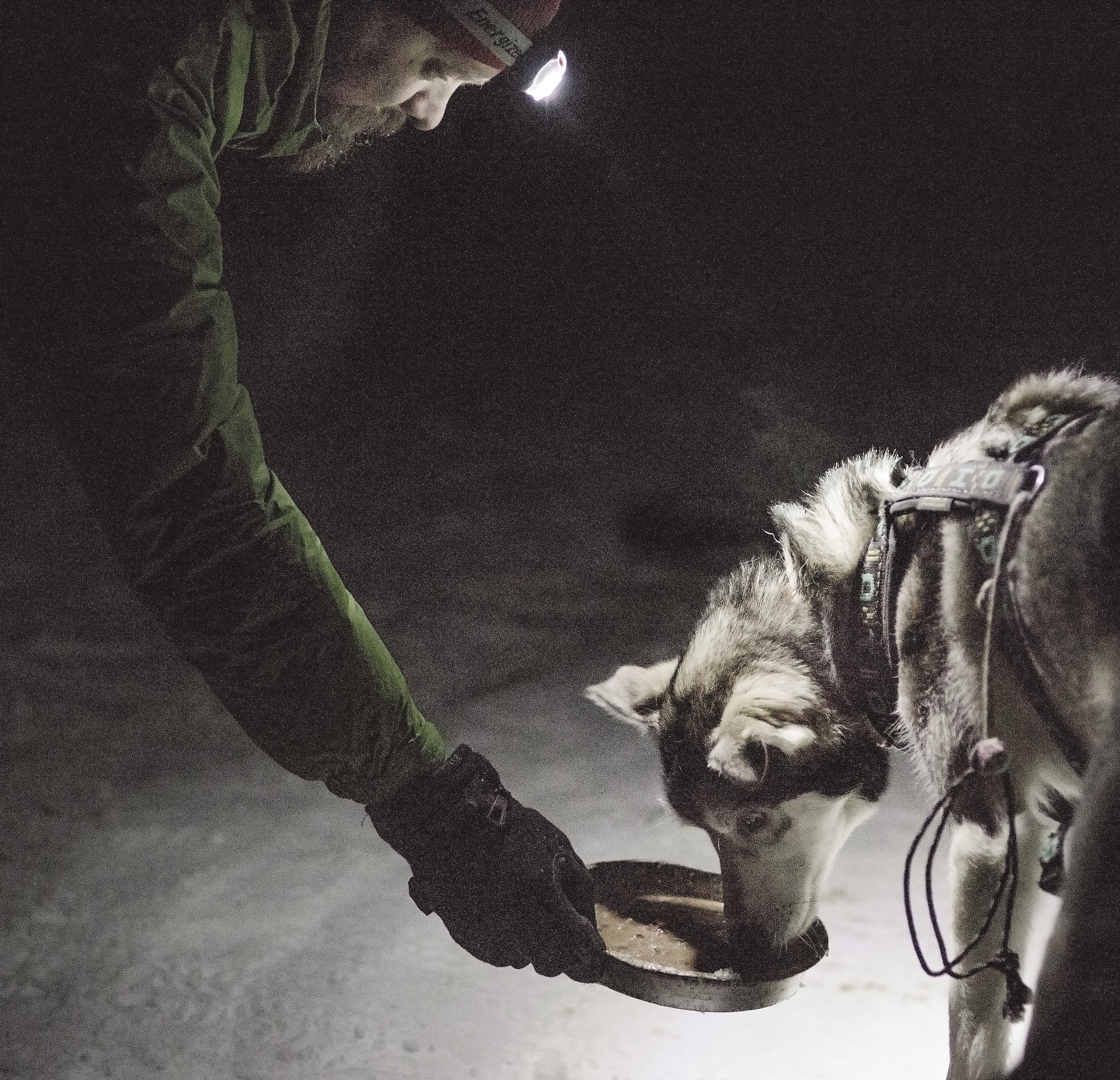 One of the handlers coaxes Ringo to eat during a race checkpoint. | ANNIE FONTAINE

The pre-race vet checks were held in Beaver Bay on a glorious sunny day. Temperatures climbed to over 40 degrees in the sun. Inside our trailer, the bucket of snacks Matt so carefully made for the race—small patties of ground liver with an electrolyte supplement—all melted into a blob. The forecast showed a small decline in daytime temps in the days ahead, but we knew it would be a warm race.

Veteran Beargrease Marathon musher Peter McClelland came up to me and asked if he could give me some pre-race advice.

“Sure,” I said, with some trepidation.

“The second year is the hardest,” he told me. And that was it.

I nodded, not sure what the advice was exactly. It felt like more of a warning. I knew plenty of mushers had finished their rookie year marathon and came back to scratch in their second year.

Don’t go out too fast. Don’t let yourself believe that you have an invincible team. Be careful. Don’t be cocky. That’s what I heard in Peter’s words of “advice” and also what I had been trying to tell myself for the past year.

Early on, the challenge seemed to be holding on (literally) to my 14-dog team. I almost lost them leaving the Finland checkpoint with a top-heavy loaded sled that tipped over. Somehow my leg got caught in a rope and I proceeded to drag through brush and into trees hanging on by my foot. The rules state that you can receive outside help if life or limb are in danger. I felt my limb was definitely in danger, and that I was darn close to losing my team altogether.

“I think I need help!” I yelled to a nearby volunteer. He helped me get my snow hook on a tree. A small crowd gathered, and there seemed to be disagreement about whether anyone could help me or not, so I straightened myself out on my own and took off.

Leaving Sawbill, race volunteers helping me get to the trail all fell off the team, and I barreled down the plowed Sawbill road with 14 dogs, one of which almost got ran over by the sled because her collar came off. As I flew down the road, screaming “Help!” in a shrill pitch evoked by absolute terror, a large chain of volunteers formed in a line to block the road. My team turned off the road and onto the trail.

I tipped again, turning onto another plowed road, dragged on my side yelling “haw, haw!” to get them to turn—they did, and back on the trail I was able to right myself. Two other spectacular crashes later on and I was half-way through the race, still with 14 dogs.

When I wasn’t struggling to hang on, driving a 14-dog team was a high for me.

Two hundred miles into the race, as I started heading back toward Duluth, the wheels started falling off the wagon.

Judy Blume became too tired to run on the way to Sawbill and I carried her in the sled bag for two hours. I left Judy and two more dogs at Sawbill.

Colleen Wallin and I were running a close race at this point. Our run times were within minutes of each other and we saw each other on the trail almost every run—her team passed me or we passed her. Last year, Colleen finished the race 20 minutes ahead of me.

At Finland, Colleen was just a minute ahead. We both planned to “turn and burn” as mushers call it…pulling in and out of the checkpoint quickly, without taking a rest. Colleen turned first and I followed several minutes later. As I left Finland, however, my team’s momentum slowed. Two dogs became too tired to run on the leg to Two Harbors and I carried them both in the sled. I knew I wasn’t racing anymore—I just needed to concentrate on finishing.

I didn’t know how far out I was from the checkpoint and the pace felt slower with every mile. I think we all wanted to quit, but I knew I couldn’t let us, so we kept going—me poling, running, pushing—whatever I had to do to get us there.

We made it to Two Harbors after 10 straight hours on the runners just after 1:00 a.m. on Wednesday—the third night of the race.

Four hours later, I pulled out of Two Harbors with eight dogs. They looked great leaving the checkpoint. I thought maybe we’d have a smooth run to the finish. One of the dogs, Cha-cha, rode in the bag most of the last run. I thought she’d had enough rest to make it to the end, but I was wrong. So a few miles from the Two Harbors checkpoint, I loaded her in the bag again (good thing she’s really small). With seven strong dogs, we carried on, but about five miles from the end, Gabby started limping, so I loaded her up with Cha-cha. Again with two in the sled bag, we made our slow way to the finish.

At the finish, I had Judy Blume’s five pups—Beezus (who led almost the entire Beargrease), Nancy (also a core leader), Fudge, Punky and Buda. Ringo, who was my surprise finisher last year and my rock this year, cheered us to the end. We came in sixth out of eight finishing teams.

The race was 50 miles longer than last year and the warm weather and fast trail conditions factored in. It’s hard to know when you’re on the runners, but I believe I started out too fast in the beginning, and this likely affected the team later on.

Somewhere during the longest run, I swore Matt would have to do the race next year. I also questioned the sanity of being out there at all. But all those feelings go away after crossing the finish and getting a night of sleep. Then it’s just a long year ahead thinking about the next Beargrease.

What sticks with me is that you can’t predict which dogs will do well or not—some of last year’s finishers didn’t make it. A couple dogs I never thought would finish did. That’s one of the things that makes racing worth it—watching dogs perform beyond your highest expectations. 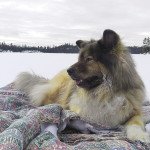 Who Domesticated Who: Humans or Dogs? 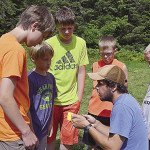