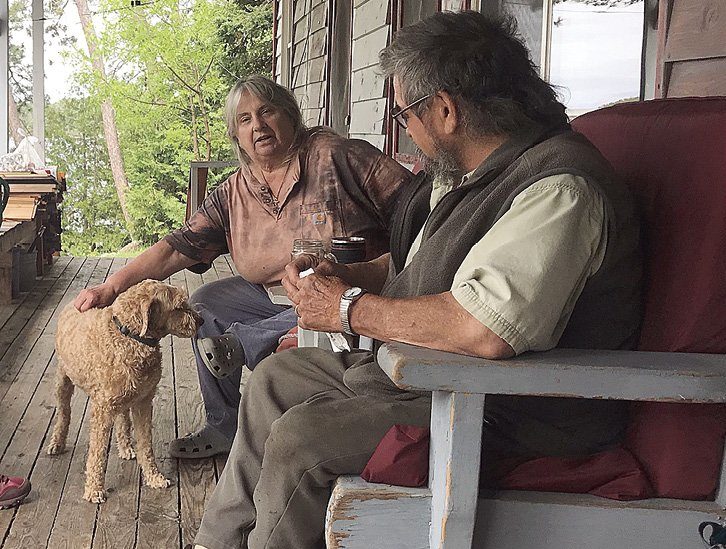 Sherry and Dicky Powell haven’t been able to return to their home in Canada since the border was closed due to the pandemic in March, 2021. | SUBMITTED

Dicky and Sherry Powell haven’t been home for a while. Specifically, they haven’t been home since the U.S. Canada border closed over a year ago in March, 2020 in response to the covid pandemic. Fortunately, they own a home in Silver Bay where they have been waiting to return to their Chippewa Inn resort on the Canadian shore of massive Saganaga Lake. The resort, founded by Dicky’s parents, Bill and Dorothy Powell in 1959, has been the epicenter of the Powell family ever since. But it is by no means the beginning of the Powell family’s history in the north.

Dicky’s grandparents were Jack Powell and Mary Ottertail, an Anishinaabe woman. Her family disapproved of the marriage, so the young couple traveled by canoe from Winton to Lake Saganagons (north of Saganaga in Ontario), where they built a cabin and raised their five children. They lived a northern life; guiding fishermen and trapping for income, getting their food from the lakes and the forest. Dicky’s parents, Bill and Dorothy, moved to Saganaga in the 1930s. On Saganaga’s Skandia Bay in 1945, they established a fishing camp they called Chippewa Lodge; they operated that prior to 1957, when they bought land next to Canada Customs for starting Chippewa Inn. They, too, lived the northern life. And to a large extent, Dicky and Sherry still do.

The couple met in 1975, when Sherry moved from Minneapolis to take a job at End of the Trail Lodge, where Dicky was working as a fishing guide. Dicky had two children from a previous marriage, Rich and Shelly. He and Sherry had twins, Laura and Paula. The two girls grew up on Saganaga.

I recently sat down with Dicky and Sherry to talk about the life they’ve led beyond the end of the road. The conversation was anything but chronological, as one story led to another.

As Sherry remarked, “The stories don’t always fit the narrative.”

That’s ok. I’ll just share some of the stories with you.

Dicky: “Sherry went into labor three weeks early, so we went to the hospital in Grand Marais. The doctor told us she needed more care than they could provide, so we had to go to Duluth. We started down the Shore in the thickest fog. You couldn’t see a thing.”

Sherry: “It took us six hours to make the drive.”

Dicky: “I was sitting in the waiting room and the nurse came out and said, ‘Guess what? There’s two of them!’ Jerry Marks came into the lodge the next day and said to my mother, ‘Hello Grandma, Grandma.’ That was how she heard the news.”

Dicky: “One time I was going down the lake with the girls and we saw a cow moose with tiny calves. I motored over so the girls could get a closer look. I ended up with one girl on each side of the boat hugging a moose calf. Now that would have made a great picture!”

Dicky: “Sherry’s parents used to stay with us at the resort. The first time her mother was there, she found three high-powered rifles in the corner of Laura’s bedroom. She panicked, telling us that kids in Florida, where she was living, get ahold of something like that and end up in trouble. I told her that I didn’t worry about the girls being around guns. They knew what they were for and respected them.”

Dicky: “When I was a little kid, my parents went fishing and caught a strange fish. They didn’t know what it was. We cooked it up and ate it. It was a walleye. The first walleyes were stocked by Art Nunstead. Pretty soon they were everywhere.”

Dicky: “Moose are tough customers. I’ve shot a couple of them right off the gun barrel.”

Dicky: “I was driving down the Gunflint and by Swamper Lake I hit a cow moose in the hind leg. She spun around and her snout came right in my open window and she went Baa!”

Dicky: “Two guys came up who said they wanted to hunt moose with a hound, which was legal in Ontario. When I picked them up, out came this 11-inch beagle. When we went hunting the next morning, we went to shore and let the beagle go. Pretty soon we heard it start barking and out came a nice bull, walking ahead of the beagle and looking back at it every now and then. A couple of days later, it chased out a cow, so they got their moose.”

Dicky: “It used to be hard to keep moose meat, because we didn’t have freezers. Back when my mom and dad and I could each buy a license, I shot three moose. That was a pile of meat, so we fired up the Servels (gas refrigerators) to full freeze and filled them up with meat.”

Sherry: “We never had very good refrigeration; that’s why we eat lots of ice cream now, because we couldn’t have it at the lake.”

Dicky: “I was running a trapline on Cache Bay with another guy. We had wooden boxes nailed to trees for our marten and fisher sets. A moose came by and knocked down one of the boxes. The box was on the ground at the base of the tree with a moose antler on top of it. That would have made a great picture!”

Dicky: “A bear is an awful neighbor. They play havoc with minnow traps and get into everything. One time we had a rifle hidden in the woods by our minnow traps. A bear found it and chewed up the stock. On the next trip, the rifle was gone and we never saw it again. I wonder what the bear did with that rifle?”

Dicky: “One year we had so many bears, I don’t know why, that you had to carry a shovel and a rifle around the resort. You were either cleaning up after a bear or shooting one. We’d haul off the carcass and the dead bear would be eaten by the other bears within one day.”

Dicky: “One day I was talking to Harry Fisher and he asked me, if I could go anywhere, what would I want to do. I told him the one trip I always wanted to take was to go to Churchill (Manitoba) to see the polar bears. Harry came back later and told me the trip was all arranged. We made the trip with Harry and his wife and eight other ‘train buffs’ Harry knew. We drove to Winnipeg and then took a private rail car to Churchill. It took two days to get there. The first morning, a bus picked us up and took us to the Tundra Buggy, and we went out on the tundra. We saw more polar bears than you could count. We also saw Arctic hares, ptarmigan and Arctic fox. You’d hear gunshots in town at night, because they were shooting polar bears with rubber bullets to chase them out of town. That was quite the trip.”

Dicky: “The north shore of Gunflint Lake used to have all the native people living there. They’re all gone now.”

Freeze up and Break up

Dicky: “When we leave at freeze up and break up, I always leave the shop and gas shop unlocked so if someone needs something, they can get it. We’ve never lost anything.”

Sherry: “We’ve had three different airboats to get around on weak ice. We even had a hovercraft. It didn’t suit our needs. It couldn’t carry two people on the water and it threw up a lot of spray, so you were always wet. And on the ice, it went way too fast.”

Dicky: “A beaver makes a good pet. In the winter, they’ll lie in front of the stove just flat like a rug. If there is a draft under the door, they’ll work all night hauling whatever they can to the door to plug the draft.”

Dicky: “People ask if beavers bite with those big teeth. They don’t bite. They hit with their front feet.”

Dicky: “When we drove dogs, you could run them on pure beaver meat. It has everything they need.”

Dicky: “Years ago, my parent’s neighbors sawed a white pine that had fallen on their property and found an old flintlock rifle inside the tree. I wonder what the story was behind that old flintlock. I believe it ended up with a guy in Bemidji.”

Dicky: “There’s a gold mine between Saganaga and Saganagons. The Powells had the claim. There’s gold up there. The problem is there isn’t enough to make mining it worthwhile.”

Dicky: “Uncle Mike (Powell) left Saganagons (Powell homestead) with two canoes and a barge between them. He went to Winton and brought back a cow on the barge. When he came to a portage, the cow pulled the barge across the portage. He brought several cows in that way.”

Dicky: “I remember when I was a boy two men with the Border Patrol came across the ice on a Harley. The motorcycle had a big tire on the back and a ski in the front. I thought, ‘If I had one of those…’”

Dicky: “You meet a lot of good people when you are running a resort. Some guests will come off the lake and bring you a bag of fresh walleye filets. You can’t beat that.”

Sherry: “We have some people who just enjoy Sag who are renting our cabins by the year. If everyone gets along, we may rent them for a longer term. Now we have people to look out for us up there.” 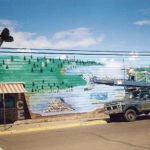