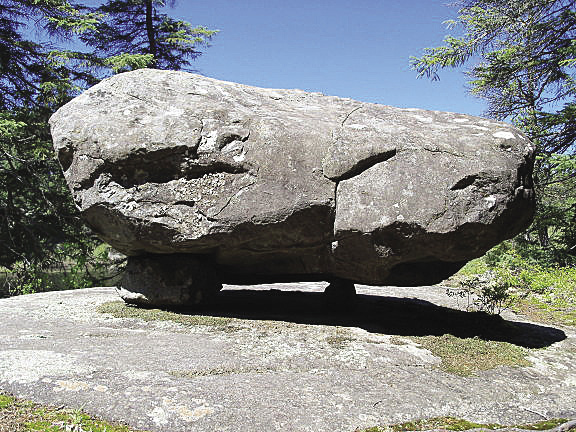 It is the “stones” in the world that hold some of the greatest mysteries, like Stonehenge in England; giant statues on Easter Island; rune stones in Scandinavia; and standing stones of Cornwall. And here in the Northern Wilds of Minnesota and Ontario, we also have ancient mysterious stone structures, including puzzling petroglyphs, strange stone boxes, stone dolmens, circles of stones and perhaps even a stone pyramid.

On a road leading to the east end of Whitefish Lake, there are secret petroglyphs (engravings cut into rock) on bedrock—secret because they are now buried under a gravel road. But author-historian Harold Alanen knows the location and wrote about them in his recent book, They Came From All Around. Back in 1964, he accompanied Jack Snider, a reporter with the Fort William Daily Times Journal and the staff photographer, when Silver Mountain’s Allan Ilkka guided the news folk to the site.

The markings covered a small area, were partially covered with moss and lichen, and seemed to be a few stylized letters of the English alphabet (including an inverted T), symbol-like “&” and the unusual carving of “a seated human figure holding a flag-staff with a banner that had a diagonal line plus cross lines that divided the ‘flag’ into quarters.” Also in the rock was a bent hook-like symbol, similar to the shape of gaff hooks, which were crafted by the copper people thousands of years ago.

Nearby, under moss-covered bedrock, were petroglyphs of unfamiliar symbols, though one looked like an odd-looking “H” with a forked vertical middle line. Or perhaps it was a separated “X” linked by a horizontal line? Lakehead University’s archaeologist, the late Dr. Ken Dawson, identified the petroglyphs as a historical site. But who made the carvings, when and why remain unknown. Some people have suggested the puzzling markings might have been made in different eras by different creators.

Years later, while in the forest near his property in Strange Township about five miles (eight km) from the site of the mysterious petroglyphs, Alanen discovered 11 mysterious moss- and lichen-covered boxes, each about the size of a milk crate. These old rock box-like structures, with four sides out of flat rock slabs and topped by rock ‘lids,’ are randomly scattered in an area of open exposures on the Canadian Shield. Some have collapsed while others are intact; all were empty. To date, no one in the archaeology world has been able to shed light on who constructed the old stone boxes or why. The mystery continues.

Dolmen stones are another puzzling configuration found in the Northern Wilds. A dolmen is three or more upright small stones supporting a much larger stone. The oldest known dolmens are in Western Europe, dating back around 7,000 years ago, but their purpose or builders remain a mystery. There are two known dolmens in our region—one in Northern Minnesota and one in Northwestern Ontario. Both can be accessed by paddling.

In northern Minnesota in the Boundary Waters Canoe Area adjacent to Quetico Park, there is a dolmen of three small stones supporting a large boulder four to five feet tall and eight feet long, sometimes called the Sawbill Dolmen. Setting out from Sawbill Lake campgrounds and paddling to the northern Kelso River, the dolmen is on the river’s eastern shore across from the Kelso trailhead before Lajendida Lake. According to locals, the dolmen at one time had inscriptions like Norse runes carved into it.

Across the border in Ontario, located a short distance southeast of Ignace, is a dolmen located close to the water’s edge on the southeast shore of a remote lake accessed by paddling and portaging from Devil’s Gap Lake. Some suggest the dolmens were put in place as some kind of ancient marker for burials, land claims or route markers by early peoples or Vikings.

Stories have circulated for some time about a mysterious stone formation under the waters of Thunder Bay’s Boulevard Lake (a manmade lake from 1907 in the city’s north end), but it wasn’t until the lake was drained in the fall of 2015 that the stones became visible. The puzzling “C” shaped rock formation measures about 80 feet in diameter. It’s made from hundreds of stones, some as large as two feet, and is situated along a terrace edge overlooking the original river channel of the Current River.

Lakehead University’s Dr. Scott Hamilton, who calls the formation “The Ring,” believes the circle may have been made by First Nations people, perhaps prior to European contact. Research on the stones continues and Hamilton has reached out to the community for any stories people have or may have heard from elders about who built the stone formation, when and why.

As the story of the Boulevard Lake circle of stones continues to unfold, another stone mystery is developing at Arrow Lake Provincial Park, where people are talking about a large underwater pyramid of stones recently discovered, but not yet explored by scuba divers.

What stories the stones could tell, if they could speak. 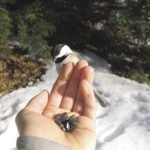 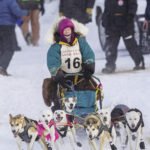 Gearing Up for a Sled Dog Race